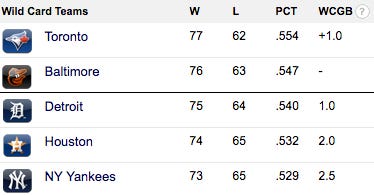 I wrote yesterday that the biggest problem the Yankee have is an inability to sweep teams. Most of the time it’s because Girardi puts out a terrible lineup and last night looked to be no different. We had Austin making his debut in right, and he misplayed a ball, and Sanchez on the bench. With Mitchell making his season debut and the bullpen being worn down, this looked like we were punting.

By some miracle, Mitchell, Severino and Clippard blanked the Blue Jays lineup for 9 innings. Mix in a home run by Starlin and a clutch single from McCann, and we have an unexpected sweep and a real shot at the playoffs. We need to stay hot and need a little help but being only 2.5 games out in the Wild Card, it could be a very exciting 3 weeks. We’re still in the hunt for the division and it may still be our best bet because we play the teams ahead of us. Until we get to those games though we should focus on the Wild Card.

Right now Houston is playing Cleveland. With Cleveland being a first place team and one of the few games against good teams, it’s an important one. A loss for Houston would move them back into a tie with us, with the Yankees still playing tonight. Baltimore, Detroit and Toronto are all off today, so a Houston loss and a Yankees will would put us 2 games out with Baltimore and Detroit kicking off a series against each other. Of course we still have to take care of business at home against Tampa for any of this to matter.

Tonight kicks off a 4 games series against the Tampa Bay Rays in The Bronx. With the Rays being out of contention since Spring Training, these should be easy wins, but then again we’ve lost a ton of easy win games this year. I think we all remember the Colorado and Minnesota stretch of June, but that was also a different team so we have a reason to be hopeful.

The Rays are a garbage team. At the same time though the season series is 6-6 so they are the perfect team to play the spoiler. With the Yankees being 4-2 at home against the Rays and the winners of the last six series at home against Tampa, the odds are in our favor to win the series, but in reality we need 3-4 or a sweep to make a move on the teams ahead of us. After a strong start to the season, CC Sabathia has struggled as of late. In 2015 Sabathia had a strong finish to push us into the playoffs and we will need him to recreate that magic tonight to keep the momentum going in the right direction.