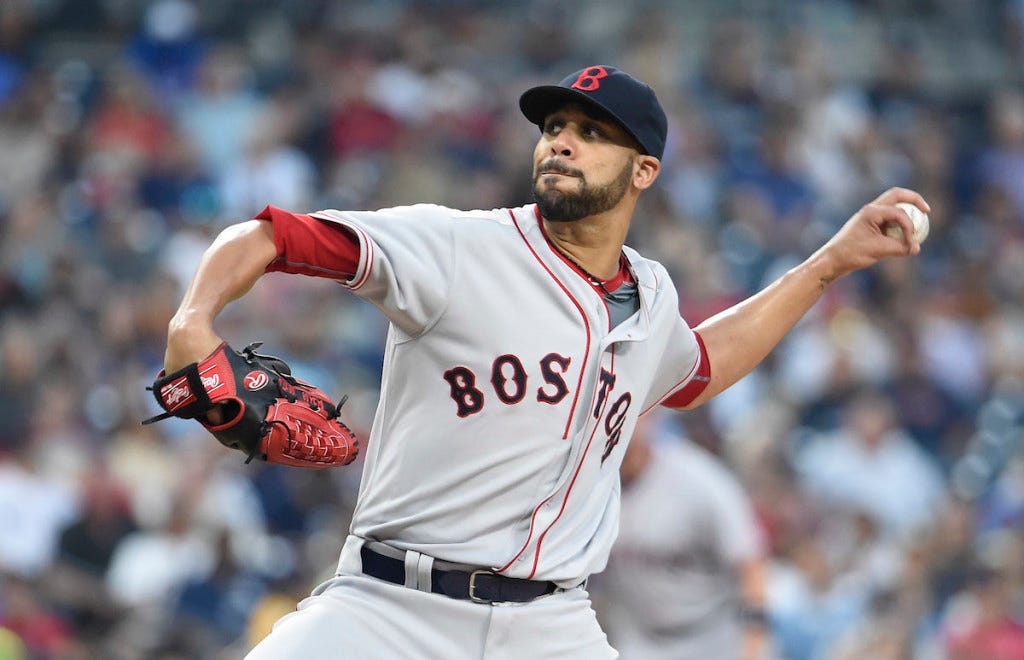 The Red Sox are in first place. Alone. A one-game lead over the Toronto Blue Jays, who you have for three games in their house starting tomorrow night. How you feelin’ about that?

Me? I feel pretty fucking good. I really do. A little nervous, but I think that feeling is more excitement and, “holy shit, the Red Sox are actually playing a huge, meaningful series with playoff implications in the final weeks of the season,” instead of it being “holy shit, I’m deathly afraid of the Blue Jays.” You’ve got Rick Porcello vs. Marco Estrada in game one, Eduardo Rodriguez vs. JA Happ in game two, and Clay Buchholz vs. Aaron Sanchez in the series finale.

On paper, that’s advantage: Blue Jays. You’re seeing three Cy Young candidates from Toronto this weekend. But with the exception of Buchholz, who’s been pitching really well lately, there isn’t a guy that the Red Sox are trotting out there that you shouldn’t feel pretty good about. Porcello is a Cy Young candidate himself, and Rodriguez has only pitched one game in Toronto, but he’s got a nice little 1.50 ERA up there. And don’t look now, but Buchholz actually has a 2.18 ERA in 16 appearances (15 starts) in Toronto, too. But we all know what’s going to happen here — this series is going to come down to who out-slugs who.

Before the Red Sox could attain that one-game lead over the Blue Jays heading into this weekend series, they had to beat the San Diego Padres first, and they did so with David Price on the mound. Price was good once again, going seven innings, allowing two earned runs, while striking out eight. He’s on a nice little six-game winning streak, where he’s got a 2.14 ERA, 42 strikeouts in 42 innings, and opponents are hitting just .202 with a .583 OPS against him. Since May 7, Price has lowered his ERA from 6.75 to 3.87, which is 21st in the American League. Not where you thought his ERA would’ve been when the Red Sox signed him in December, but also not where you thought it’d end up back in the first week of May, either.

You can continue the conversation about this season being a disappointment in regards to where your expectations were for Price at the start of the year, and what the results ended up being, but the bottom line is that I’d much rather have him start out like dog shit and finish strong than vice versa, and that’s exactly what he’s doing right now. Since May 12, Price has made 23 starts, and he’s sixth in the American League in ERA over that span (3.11). By the way, 23 starts account for 77% of Price’s entire season.

Travis Shaw, Hanley Ramirez and Brock Holt all homered last night, giving the Red Sox 178 home runs for the 2016 season, which is already 17 more home runs than they hit in all of last year. Since August 12, the Red Sox are tied for the most wins in the MLB (17), they have the highest OPS in the American League (.835), and the lowest team ERA (3.24), and starting pitching ERA (3.18). Also worth noting that their bullpen has the fourth best WHIP in the American League over that span, too (1.26). You couldn’t ask for a better time for this team to be hitting its peak.

It’s happy times and shit around here, but I did just want to hit on one little negative thing really quick. What the hell was that stunt that John Farrell pulled in the ninth inning last night? Listen, I get that you want to get Brad Ziegler and Craig Kimbrel some work before the Toronto series, but what the fuck did that honestly do for either one of those pitchers to have Ziegler throw two thirds of an inning when he hasn’t pitched since August 27, and Kimbrel pitch a third of an inning, only to throw four pitches. Four! That’s “getting him some work” in that inning? Just let Ziegler have the inning. He needed the work more than anybody in that bullpen. Have Kimbrel throw a bullpen, if he needs the work. You did a disservice to both relievers having them split an inning, especially when Ziegler needed it more. Ridiculous.

To end on a positive note, Koji Uehara made his return from the disabled list and threw a perfect inning of relief, striking out two batters. He looked good. Velocity readings don’t mean much for a guy who doesn’t have much velocity to begin with. What’s important for Koji is that is splitter is actually splitting, and that pitch was dropping off the table for him last night. One strikeout came on a splitter down in the dirt, and the other came on an 85 MPH fastball up by the eyes, that somehow looks like it’s coming in at 98 because of Koji’s ninja magic.