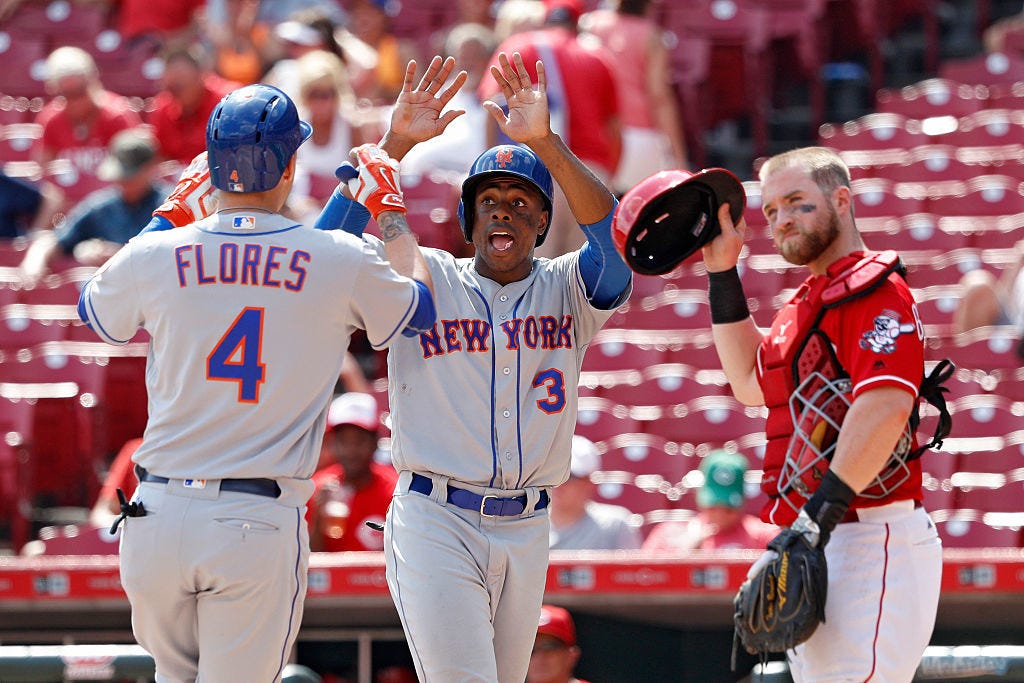 (Note: this was written Pre Tebow signing. This regards the actual players on the field. Feel free to add your own paragraph about divine inspiration in addition to the regular baseball talk)

What the New York Mets are doing is absolutely beyond comprehension. Now in a virtual tie for the 2nd Wild Card with the Cardinals, 0.5 a game back from the San Francisco Giants. In a matter of 18 games they’ve leap frogged 3 teams and 5.5 games.

On July 31 their playoff chances sunk to 6.7%, the only contending team lower than them was the Pirates.

Today they sit at a 52% chance. They are making this run in September – a month that absolutely haunts them as a franchise. They are tracking down proven winners like the Cardinals and Giants, teams that are the Anti-Mets in the history books.

And of course most of all they are doing it with a rag tag line up. They are doing this with 3/5ths of their stellar, dominant rotation that was supposed to carry them the the Canyon of Heroes. They’re the Dred Scott Rotation. Missing three out of five and the guys filling in are 3/5ths of a pitcher. What was supposed to be Harvey, Matz, and deGrom is now fucking Seth Lugo, Robert Gsellman and Rafael Montero. Those guys have been relatively speaking “lights out” during this stretch.

Let’s start with Seth Lugo. You want to talk about things beyond the realm of comprehension? He’s a Puerto Rican with the first name Seth. I don’t know what to make of this cat.

How about Robert Gsellman? His last name starts with Gs. And it’s not even a silent G! You actually say that shit. Guh-sellman. How can you trust a guy with a name that starts with Gs. He also looks like a bizarro world version of deGrom.

Then there’s Rafael Montero. Once lumped in with the other arms of the future. He and Mejia were the next thing before the next things actually became The Next Things. That guy has STUNK all year in the minors and steps up seamlessly.

3 aces down AND almost their entire infield injured, with the one steady hand being Asdrubal goddam Cabrera. Their team Captain probably out with career ending injuries. Their stud corner OFer, who bashed 2 World Series homers and started off with such a tear that people were comparing him to goddam Mike Trout, regressed so badly he found himself back in Las Vegas. About 25 home runs from Duda on the bench. My main man NEIL who would have been considered the best acquisition in baseball this year if Daniel Murphy wasn’t on steroids out for the season. A full time catcher that somehow has FOUR home runs and FOURTEEN RBI in September. A probably-hasty deadline trade that hasn’t yet really panned out (I think we’re about to see hot Bruce, FYI) 90% of the team this organization planned on winning with is dead or playing like garbage.

The perfect microcosm for this season is Curtis Granderson. Grandersons statline is incomprehensible. 25 home runs, 45 RBI. At one point he hit 18 consecutive solo home runs. He has something like 8 RBI all year via non home runs. It’s baffling. It doesn’t make sense. You can talk about how RBI are circumstantial and where he bats in the lineup and all that, but 25 and 45 puts the mind in a goddam pretzel.

And that’s the 2016 New York Mets. None of it makes sense but it seems to be working. A little bit of luck coming their way with their schedule, a little bit of luck with certain teams plummeting in Usual-Mets fashion, hopefully some good timing with the right guys getting hot, and their just might be some October baseball in Flushing after all. If we’re being totally honest, I can’t see Gsellman and Lugo and Montero continuing this a few more turns through the rotation…BUT, that’s exactly what I said the last couple times through so who fucking knows. Maybe the Lord and Savior Tim Tebow turns water into wine and this rotation can pitch lights out for 3-4 more weeks. Earlier this year I said I thought the Mets had one more run in them, but I didn’t think it was enough. I didn’t think the other teams would cooperate. But for once – in crunch time September, when it seems like everything SHOULD be going against them – everything seems to be breaking their way. Long way to go…but that Mets Magic seems to be back.

PS – When the Mets make their run this year, this WILL be known as the Year of Colon. King Bart. THE ROCK. When everyone was dropping like flies or dealing with bone spurs and didn’t know where to turn, Tolo went out there every 5 days and kept the ship on course.