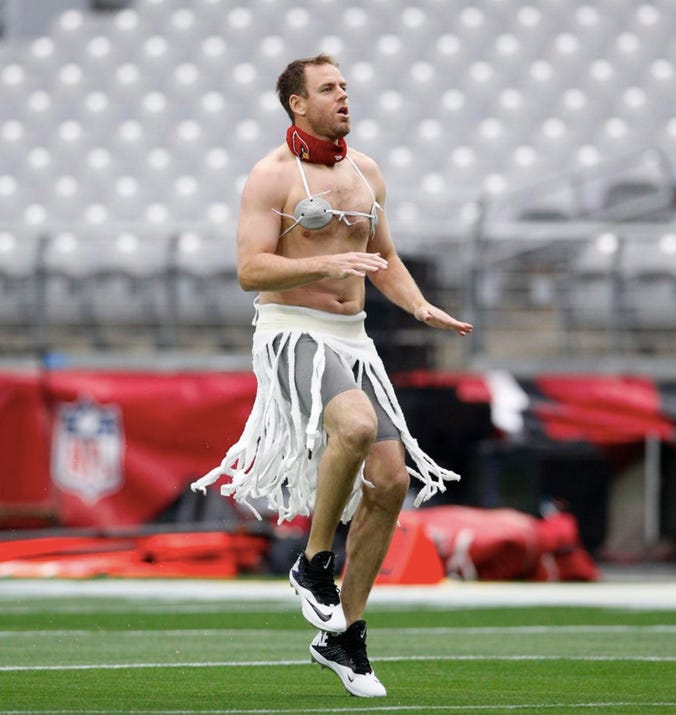 FOXBORO — Carson Palmer was a gold mine of information during a conference call with New England media Wednesday afternoon.

Informative, insightful and willing to answer every question during a 15-minute session.

The only time Palmer slipped from highly articulate to a little bit tongue-tied was when he was asked about Tom Brady’s suspension. Palmer, the Cardinals quarterback, tried to tightrope between saying how he really feels and being wary of causing a major poopstorm. Suffice to say, 1) he has little sympathy for Brady and 2) he probably caused a poopstorm.

Asked by Jeff Howe of The Boston Herald how he felt about Brady’s treatment, Palmer said, “I tried not to follow it just because it was everywhere for so long but I go back and … you follow what the rule book says and go about your business and your work and if they tell you not to do it and you get busted and what happens happens then you suffer the consequences.

“I’m sure you guys look at it a lot differently but I know a lot of players around the league just looking at it . . . ” and here Palmer stopped and seemed to veer away from saying most players agreed with him and concluded saying, “I don’t know if you can feel too strongly about it one way or the other.”

I said that, around New England, the feeling is the league didn’t prove anything. Asked if he felt differently, Palmer said, “To be honest … there was … supposedly the balls went somewhere and they weren’t supposed to go there. There was humidity and not enough humidity and whatever it was and altitude. I don’t really know. I didn’t follow the story. As soon as it came on I just turned it off because I was so sick of hearing about it.

“Whatever the league comes down upon and whatever ruling they make is what they make,” Palmer said. “You don’t have much of a decision after that and you can fight it for a little bit but after a while, you just gotta abide by what they say.”

I’m gonna make this quick because I, like the rest of the civilized world, can’t possibly stomach more Deflategate talk. But I just wanted to make it clear that Carson Palmer is a idiot. I know he said it himself (check, it’s in there. At some point in that incoherent rambling I promise you he says, “By the way, you guys all know I’m a fucking idiot, right?) but I really wanted to drive the point home. He’s a idiot.

When you start discussing the subject by announcing that you know absolutely nothing about it, it’s probably best to just stop there.

“Hey Carson, what do you think about Brady’s suspension?”

“You know, I really didn’t pay attention to any of that stuff. I tried not to follow it.

Boom, great answer and a totally understandable response. Cut it there. Because when you continue blindly fumbling around for a point, pretending you have even a slight idea what you’re talking about, you make yourself look like a real doofus. Brady’s guilty? Brady got caught? That’s a hot take, Carson. Hotter than the humidity at Gillette in December that caused those balls to deflate. Take it easy with the Goodell ballwashing about following the rule book and having to just abide by what the powers that be say and suffer their consequences. That ivory tower must be higher than Foxboro, a town famous for it’s altitude.