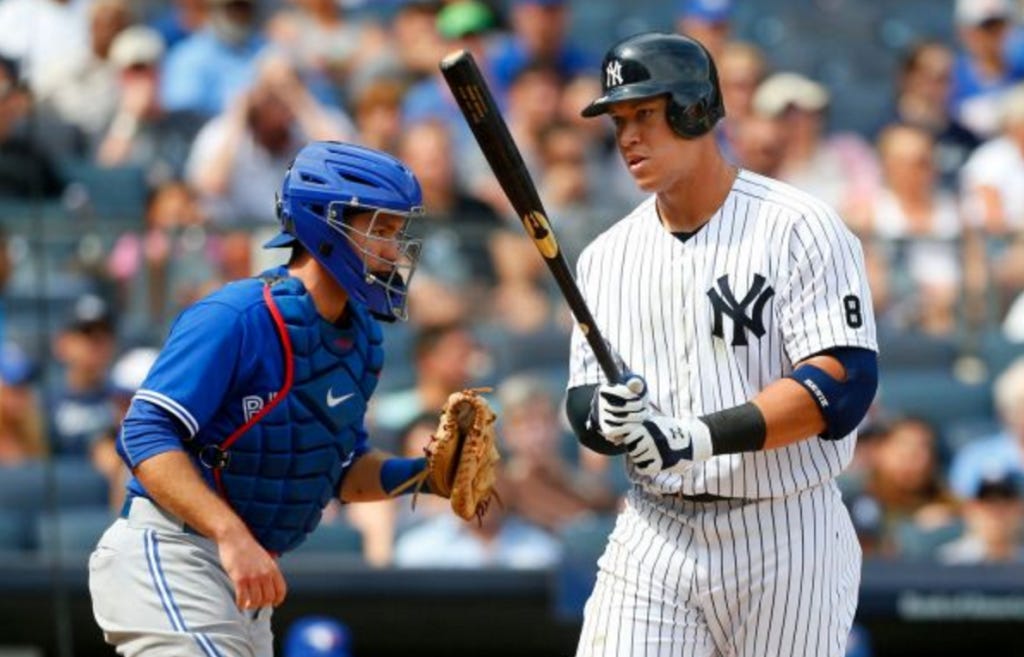 24-year-old Yankees outfielder Aaron Judge announced his arrival at the major league level with authority, blasting a home run in his first at-bat, and then homering again in the first at-bat of his second major league game.

Since making his major league debut on August 13, out of 185 players who qualify, Judge ranks 183rd in batting average (.174), 179th in on-base percentage (.247), and 162nd in slugging percentage (.333). He’s also struck out in 48.1% of his at-bats, which I’m sure you could probably guess is the mark that leads the majors over that span. For the sake of comparison, major league hitters have struck out 19.0% of the time this season.

Oddly enough, I wouldn’t be too concerned if I were a Yankee fan. Here comes the spin zone — Judge played his entire 2016 season at the Triple-A level before being called up in mid-August, and he had the 12th best OPS at that level prior to his call-up (.854). Out of the 96 players at the Triple-A level who qualified on August 12, Judge had the 20th highest strikeout percentage (23.9%). You also have to consider this — 24 is kind of “old” for a prospect to be getting a call-up. How should you interpret that? I’d interpret that as this is a guy who has taken some time to get adjusted to every level he’s ever played at. Call it a red flag if you want, but once he becomes adjusted, he mashes.

If you combine his numbers from every minor league level he’s played at over the last three years, he hit .278 with an .845 OPS. The power is obviously there, as we’ve already seen. Unfortunately, the strikeouts are always going to be there, too. But the rate at which they’re occurring will likely come down, and you can live with the strikeouts as long as you’re getting an OPS around .850, which I have a feeling is what he’ll become once he gets acclimated to the major league level. Either that, or he’ll eclipse that and end up closer to the .900 OPS end of the spectrum if he starts making contact more consistently. Dude’s built like a tight end, and he’s got grown ass man strength. Certainly not out of the realm of possibility.