“That’s what I’m saying with the not being informed because those people aren’t informed,” Schumer said. “You know, if you go, ‘Why don’t you like Hillary?’ they’ll go, ‘She lied about her emails. What else is she going to lie about?’ People get one fact and that’s what they latch on to about a candidate. They’ll go, ‘She lied about that.’ I’m like, ‘Well Donald Trump has a fake college. Donald Trump doesn’t pay his workers. He won’t release his taxes.’ There’s never been a nominee that has not released his taxes. I haven’t had a conversation with anyone who doesn’t like Hillary where they’ve had anything meaningful to say.”

“My act will change because I will need to learn to speak Spanish,” she added. “Because I will move to Spain or somewhere. It’s beyond my comprehension if Trump won. It’s just too crazy.”

There was a time years ago when Amy Schumer was opening for Jim Norton and regular on the Opie and Anthony show where I thought she was funny. And since then each time I see a news item about her, that feeling has gotten lesser and lesser, from her “We’re just a couple wacky averaged-sized girls” shit with Jennifer Lawrence to the Lena Dunham-esque complaining about everything and general hypocrisy (more on that below). And now the cliché grandstanding about how you’ll leave the country if someone is elected President…like come on already. This country has been the most amazing thing for a chick like Amy Schumer, someone born into a wealthy and powerful family who then ported (and portly’d) that headstart into more wealth and success for herself and her family. She’s not what I would call a conventional leading woman for film but she’s been in a movie Trainwreck that made over $100 million. She’s the American dream as much as one can be and because the Democratic process this country was founded on doesn’t shake out your way, now it all sucks and you should flee? It’s such stupid, phony logic and I genuinely can’t stand it.

And the other part of it…Amy Schumer recently tweeted and immediately deleted something going viral for being racist with her claiming that most of the guys harassing chicks on the street are minorities: 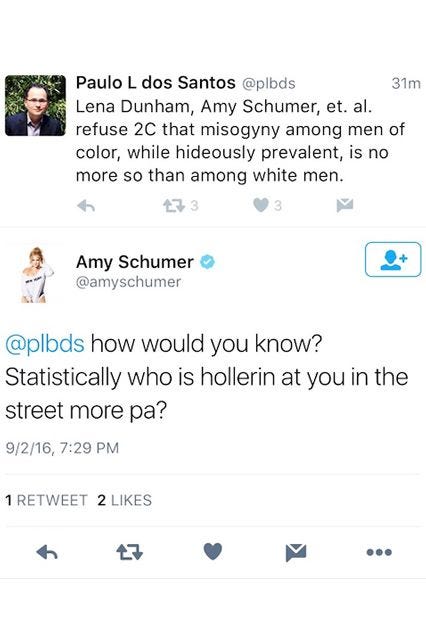 To be clear, I don’t even think this is that awfully racist of a tweet as some sites made it out to be. But the thing to me is if you’re going to represent yourself as some icon of modern feminism and bitch about a wide variety of things, maybe you shouldn’t cite race statistics or say racially condescending things like “pa” to someone on Twitter? You can’t bitch heavily about one thing that affects you, the poor aggrieved wealthy white woman, and blindly bury other groups in the process then still fashion yourself as this social justice warrior type. Cash your checks, make your easy “Lol dudes cum in me, crazy stuff right ladies?” jokes and accept whatever President is willing to let you keep getting away with it to fame and fortune for as long as you possibly can. Or don’t be a pussy and actually move to Spain and coast on tapas, cumin-infused semen, and royalty checks. Betcha won’t.