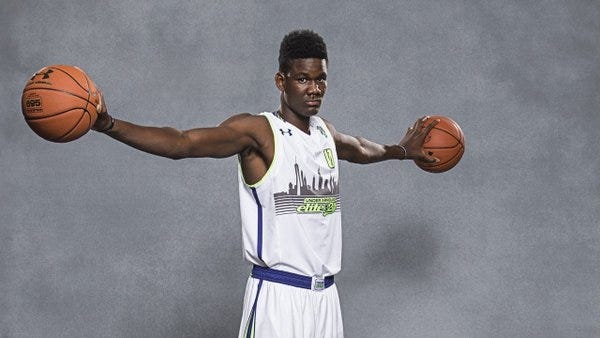 There’s one thing for damn certain. Sean Miller doesn’t care about the risk of taking a kid who has eligibility questions at Arizona. That was the case yet again last night when Miller and Arizona landed No. 1 recruit DeAndre Ayton, an absolute freak on the court.

Ayton chose Arizona over Kentucky and Kansas, which was shocking to say the least. For his entire recruitment it was Kansas as the heavy favorite – hell, the 247 Crystal Ball had Kansas as a 100% chance to land Ayton. He did an interview a couple months back where he said Kansas was the only school recruiting him. It made sense for him to go there as a talented big, who needs to get his ass kicked from time to time by a coach like Bill Self to make him even better. That was still the case for most of yesterday until a rumor by Evan Daniels made it seem like Kentucky was going to be the decision. That didn’t last long however as Ayton picked the other Wildcats just weeks after going on an official visit and deciding to stay closer to his America hometown.

I say American hometown because that’s part of the eligibility questions for Ayton. The 18-year old is a native of the Bahamas before coming over to the United States in middle school and having a top AAU coach become his legal guardian. The big concern is if the NCAA will accept his coursework at Hillcrest Prep Academy, which has a shaky status with the NCAA. However, he doesn’t want to be the next Thon Maker. During his announcement last night he was asked about playing prep school or going overseas for a year before the NBA and he responded with ‘Not at all. My family says college is a must.’

So what makes this guy so good? The fact he’s a legit 7-feet tall and can step out and shoot the ball while also being a strong passer helps with that. A lot of people compare him to Kevin Garnett, which is actually somewhat reasonable when you take personality out of the equation. The one thing Ayton can do when he steps on the NCAAA court is defend. He’s got the ability to protect the rim and also stick with a guard on a switch due to his agility.

How about Sean Miller though? What he’s done at Arizona needs to be talked about more often. He’s turned that program into the best program west of Lawrence, Kansas and is second behind Kentucky in 5-star recruits the last seven years. A lot of people will pass him off because he hasn’t made a Final Four yet, but winning 30 games consistently and making three Elite Eights is no joke. This guy is a top-10 coach in America and is due for a title in the near future.

So with Ayton and Michael Porter Jr., (committed to Washington) off the board, the next major chip to fall is likely to be Mo Bamba, another big and top-5 recruit in the country. He has four schools on his list and one is more than shocking. He has Kentucky, Duke, Villanova and Harvard – yes Harvard, in fact he just took an official visit there yesterday. Keep an eye on Bamba and Trae Young – a guard in a year where guards are limited – if you’re into recruiting.

As we always end these. Here’s the obligatory mixtape for Kmarko.