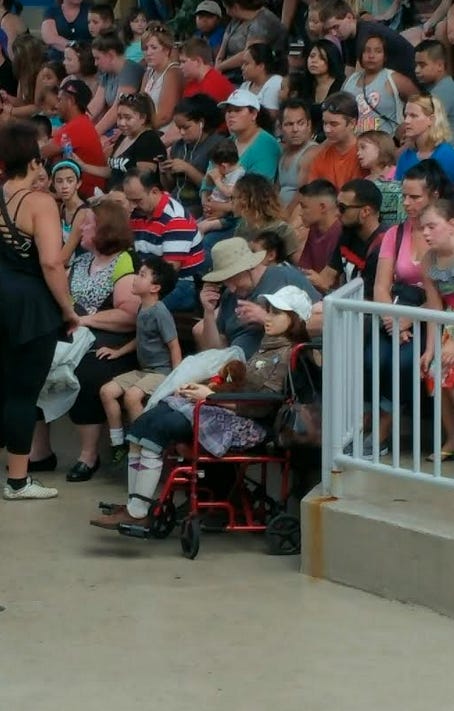 A coworker of mine walked into work this morning and told me a “horrific” story from her weekend and showed me the attached picture. It was taken at the Brookfield zoo in Chicago. Said she was at the dolphin show with her 3 kids when she looked over and noticed a man sitting next to a woman in a wheelchair. He was consistently stroking her hair, touching her face and talking to her. Everything seemed normal, just a guy stroking his wife’s face in public until she and the others around her noticed that the fully dressed woman in the wheelchair was actually a mannequin with a wig on. Apparently when people asked the guy about it, he just said that she was his wife and they just wanted to enjoy the show.

First off, pretty fucking ballsy for this guy to bring his plastic wife out in public and caress  the shit out of her, let alone put a “ring”on her finger. But hey man, it’s 2016. If the guy wants to marry his plastic doll and take her out for a nice Sunday dolphin show, why not right?

Evan, you said it yourself, it’s 2016, if you want to dress up a mannequin and stroke her hair at the Brookfield Zoo there is no better time to do that than in 2016. Why? The internet is why. We’re all so desensitized to fucked up shit that none of this matters anymore. What was a freak 20 years ago is just a run of the mill weirdo in 2016. The internet has taken away all shock factor. Fuck even TLC has done that to us with their “My Strange Addiction” show. There is nothing left to stun me. If you want to pin point the moment where I could no longer be shocked it would be 2 girls 1 cup. If a couple of chicks eating shit can go viral then anything can happen. I wouldn’t even give this guy a second glance. Just last week a guy trended because he jerked off with a McChicken sandwich, you think I care about a mannequin in a wheelchair? FUCK NO. Just a casual Tuesday.

I hate the “how will I explain this to my kids” people but in this instance it probably stands. I’m not shocked because like most of you, I’ve been to the end of the internet and back. But a little kid wondering why some guy in a bucket hat is pawing at a plastic doll while the Dolphins are trying to put on show? That isn’t the easiest question to answer.