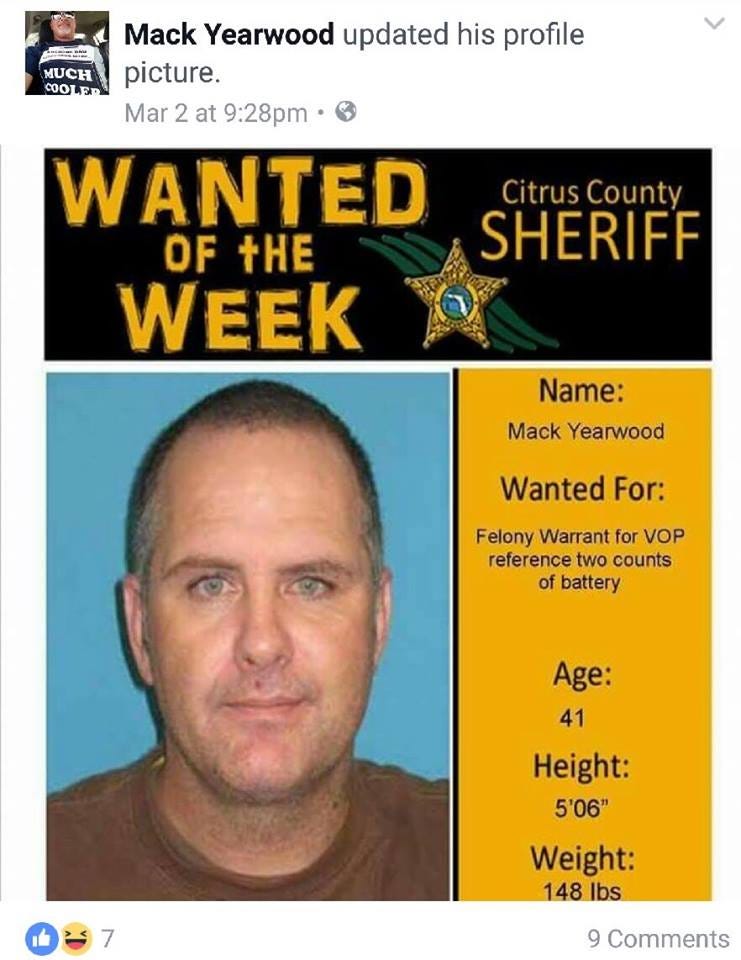 ABC News- Police searching for a Florida man in connection to a battery case discovered that he was using his wanted poster and mug shot from another case as his Facebook profile picture, authorities said. “Facebook is a great way to communicate and connect with old friends and family,” Cpl. Brian Bossio wrote in a post on the Stuart Police Department’s Facebook page. “If you are wanted by the police, it’s probably not a good idea to use the ‘Wanted of the Week’ poster of yourself as your profile pic.” Police responded to a call late Monday night about an alleged battery at a house in Stuart, Florida, Bossio told ABC News today.

Although the suspect had fled the scene, the alleged victim identified Mack Yearwood, 42, as the suspect and gave the officer an address where Yearwood was staying, police said. The officer passed that information along to his colleagues working the next day, police said. Police said that as they began to research Yearwood, they discovered that he had two outstanding warrants in Florida, and they came across his Facebook page. Police then arrested Yearwood at his brother’s house on Tuesday in connection to those warrants, one of which was issued in Citrus County. “The patrol guys, to look where he was and for some intelligence, they went to his Facebook page,” Bossio said. “They discovered that he used his wanted poster for his Facebook profile.”

Bossio added that Yearwood was sleeping at his brother’s home when officers arrived and asked an officer to hand him his pants. “When he was putting his jeans on, a bag of weed fell out,” Bossio said — resulting in a cannabis possession charge. Yearwood asked police not to charge him for that, according to the police incident report. He has not been charged in the recent battery allegation because the case is still under investigation, police said.

Yet another episode of When Keeping It Facebook Goes Wrong. Now before I get too angry at this guy, let me say that I realize having your wanted poster as your profile picture is probably the cool thing to do in Florida. I feel like every Florida resident has at least two Grand Theft Auto wanted stars at any given moment, so a wanted poster profile pic likely gives you a shitload of street cred. Up here in New York most of the profile pictures are usually lame selfies with a sports field in the background or pictures where someone is only half cropped out. So I can’t say that a wanted poster profile pic is lame. Just dumb. But then again so is Facebook, unless you are really really reeeeally into scorching hot takes, baby pictures, or recipes from family friends. That being said, the feeling of getting a few Likes and the laughing face emoji on any medium of social media trumps freedom.

Also, the weed falling out of this guy’s pocket as he was arrested was straight out of an episode of Cops. Granted in 2016, you’d probably see meth or heroin fall out of the guy’s pocket. But as evidenced by the usage of Facebook, our boy Mack Yearwood (A+++ name btw) likes to keep it old school. And there is something to be said for that.