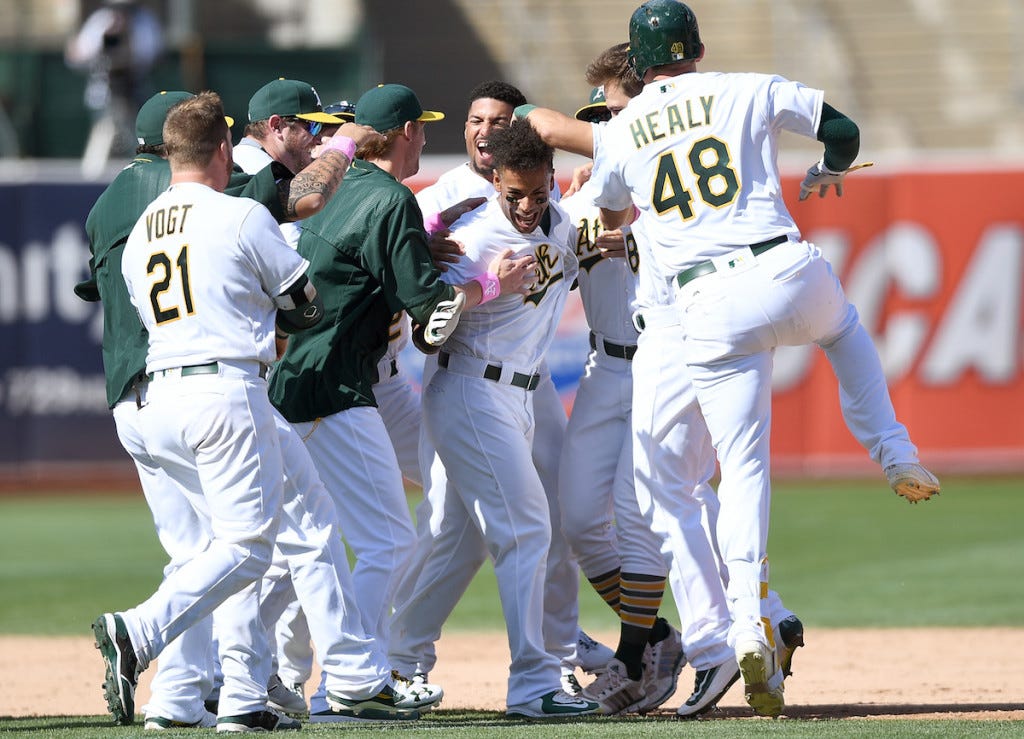 What’s not okay is the fact that Eduardo Rodriguez and the Red Sox took a no-hitter into the 8th inning with two outs, and lost this game on a walk-off error for the fourth time this season. Four walk-off errors in one year. I’ve never seen anything like it. One a year is too many, never mind what the Red Sox have miraculously accomplished — one in Toronto, one in Anaheim, another in Tampa, and then this one yesterday in Oakland. Hey, at least this one wasn’t at first base like all the others. Progress? Maybe?

And I understand that fans are frustrated with the end result of this game, and there was some ire directed at Brock Holt for misplaying that ball out in left field, but he’s not some sort of defensive liability out there. I saw some fans saying that John Farrell should’ve had Chris Young in left field as a defensive replacement in the ninth inning, and maybe that’s something they’ll consider until Andrew Benintendi returns. But as someone who bashes Farrell regularly for his idiotic decisions, I don’t think this is one of them. Before that blunder in the ninth yesterday, Holt only had one error in his entire career as a left fielder. One.

I don’t think the “Farrell should use a defensive replacement in the late innings for Holt” narrative will continue much longer, because Benintendi is nearing a return. He’s got a custom-fitted knee brace coming tomorrow that will allow him to ramp up his workouts, before facing live pitching against Red Sox teammates, or being sent to Florida to face live pitching in the Instructional League. Benintendi played catch before the game and took practice swings on Sunday, and said that he “felt fine” and that it was “all good.” No doubt, that’ll be a huge upgrade once he’s ready to return.

Anyways, back to this game. That game was kinda like if you watched the movie Titanic for the first time, and you thought it was a love story about two kids who fell in love on a historic maiden voyage that went flawlessly, and then they lived happily ever after together. Total plot twist. Everything was going great on Sunday. I thought I was going to see history and be so happy, and then the ship hit an iceberg, started to sink, some dude shattered his legs off a propellor, the ship split in half, sinks completely into the ice cold Atlantic, and then Jack freezes to death.

Same idea in Oakland — Rodriguez carried a no-hitter into the eighth inning, he’s cruising along, appeared to have recorded the third out of the eighth, but a replay challenge overturned the call to break up the no-hitter, and then the A’s walked it off against the closer in the bottom of the ninth. Everybody died.

We’ve seen it already — he’s a different pitcher in that second inning. The velocity is noticeably down, and he becomes much more hittable. Fuckin’ guy’s only been here for two months, but I feel like I’ve said this sentence a million times already. You have to go to Brad Ziegler in that situation. You have to. If you’re at home, I have no issue with using Kimbrel in a 0-0, non-save situation in the ninth to get you to the bottom half with a chance to walk it off. You use your best reliever in that situation, and that’s Kimbrel. On the road? It makes no sense to have Kimbrel pitch in that situation. You go with Ziegler there, and save Kimbrel for when you actually need him to close out the game.

There is a positive to come out of all of this, though. Two starts prior to this for Rodriguez, the left-hander carried a no-hitter into the fifth inning in Baltimore against the Orioles, and was forced to exit the game with a hamstring injury. He tapped out of his next start less than 24 hours before he was scheduled to make it, drawing much justified criticism over his mental toughness, and even just in general. You can’t just back out of a start like that on such short notice. His next time out on August 28 against the Royals, Rodriguez got knocked around, giving up five earned runs in 5.1 innings to take the loss, and it seemed like here we go again.

This was a big statement outing for Rodriguez. He hadn’t pitched into the 8th inning all year, and then he was a non-replay challenge away from pithing eight no-hit innings on the road. It might’ve been against a lowly A’s team, but I don’t see anybody else nearly no-hitting them. Over Rodriguez’s last nine starts, he’s got a 2.73 ERA with 45 strikeouts in 52.2 innings, while opponents are hitting just .200 with a .582 OPS against him. Compare that to where he was over his first six starts of the year — an 8.59 ERA with opponents hitting .315 with a .993 OPS against him.