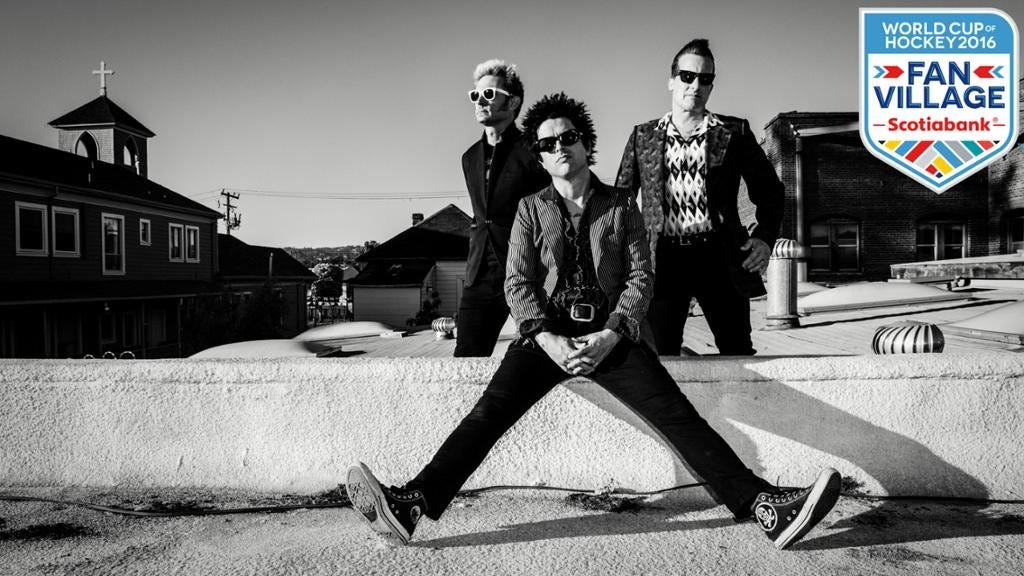 NHL - The Scotiabank World Cup of Hockey Fan Village in downtown Toronto’s historic Distillery District will salute members of Canada’s 2016 Olympic team followed by a live performance from Rock and Roll Hall of Fame inductees and Grammy® Award-winning rock band Green Day on Friday, Sept. 23 at 6:30 p.m. Tickets to the World Cup of Hockey Celebration of Champions featuring Green Day will be available for purchase via www.Ticketmaster.ca, the official ticket marketplace of the NHL®, beginning at 10 a.m. ET on Thursday, Sept. 8. The show will mark Green Day’s first live date in Canada of 2016.

I feel like people have been writing off the World Cup of Hockey since the day it was announced. People say it’s a gimmick that nobody will really get into. People say that having a North American young guns team and European All Star team will take away from the competitive nature of the tournament. People say that nobody actually likes hockey. Well guess what, bitches? I’ve got two words for all the haters in the building–Green. Day.

That’s right. You read that correctly. THE Green Day will be performing LIVE at the World Cup of Hockey Fan Village exactly 3 weeks from today. One of the biggest knocks on the NHL is that they never really seem to get their musical choices right when it comes to events like this. The fact that Fall Out Boy won’t be at the World Cup to perform “Centuries” on repeat for 24 straight hours is actually the upset of the century. But don’t wake me up when September ends. Wake me up when it’s September 23 so I can watch Green Day rock the fucking socks off of everybody at the World Cup of Hockey. Sure, Team USA may play like a bunch of American idiots out there and have no shot of winning gold. They’ll be skating down a Boulevard of Broken Dreams by the end of the tournament. Good Riddance to them though. Because watching the 23U North America team will be like a Welcome To Paradise.

We’re just a few weeks away, people. Get pumped because this is going to be a Holiday for hockey fans and all living, breathing humans alike. Just remember to always Know Your Enemy; Russia. More World Cup coverage will be starting up in the next couple of weeks. I can’t promise there won’t be any more Green Day puns.