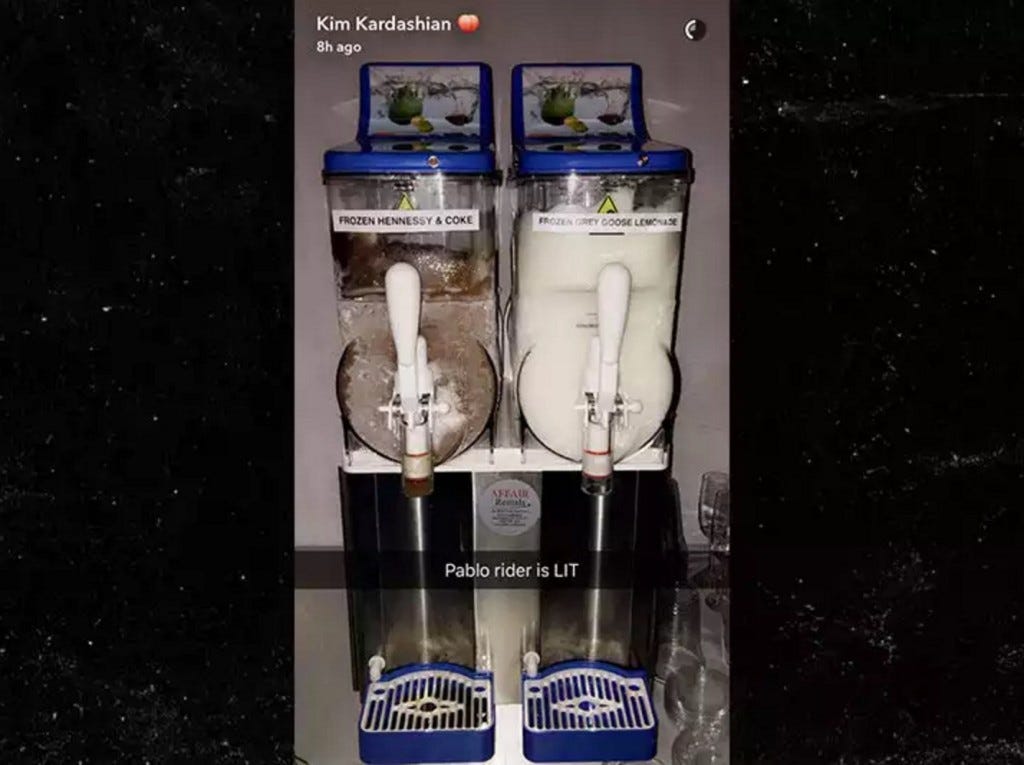 TMZ – Kanye West’s always going to have his Hennessy waiting on ice backstage during his Saint Pablo Tour … TMZ has learned.

‘Ye made sure of it on his tour rider, which calls for 2 alcoholic slushie machines — one dispensing frozen Hennessy and Coke, and another with frozen Grey Goose and lemonade.

We’re told the Goose is for Kim, who showed off the slushie gear during Kanye’s Toronto tour stop — and according to the tour doc … they’ll be standard at every show.

Kanye claims he’s a genius all the time and, while I’ve liked his music just fine for a decade now, I’m a little skeptical of the correlation between autotune, Derelicte clothing lines, and genius. But seeing that Kanye is not only a frozen cocktails guy but has the foresight to have them ready at every venue he has…this might be the tipping point for me buying in. I’m the kind of idiot who bought a Margaritaville machine one day a few years back because after ordering frozen margs all summer I thought I could become a full-time frozen drink guy only to end up using it probably less than 10 times in total (great conversation piece though). But in a setting where you’re trying to cool out before performing on stage or coming back after a hot sweaty show, that’s the perfect backstage drink to get you fucked up fast and cool you down. Put a request for a big container full of tiny umbrellas to put in there and some of those beach-shaped glasses that kind of look like a curvy island chick then sit back and enjoy it for yourself and backstage guests. Genius genius genius, way more than other assholes demanding a bowl of red M&Ms or fast food backstage.

I will say if I had to choose between the two drinks, I’m going with Kim’s vodka and lemonade every time. Can’t say I’ve had many Hennessys and Cokes let alone frozen ones but I’m not sold on making that one of my two frozen drinks. Margaritas or Mudslides in that second machine if Kanye wants my full respect for his genius.

Also since it’s Friday and you clicked a blog about Kanye and alcoholic slushies, here’s Kim parading her tits around NYC earlier this week as a bonus (NSFWish):

Shit talk her all you want but I’m all for her ditching the pretense and dumping them out there like that more and more. If it leads to even one easily manipulated 22-year-old emulating this in public, I think it’s well worth any attention whore eye-rolling it may get.