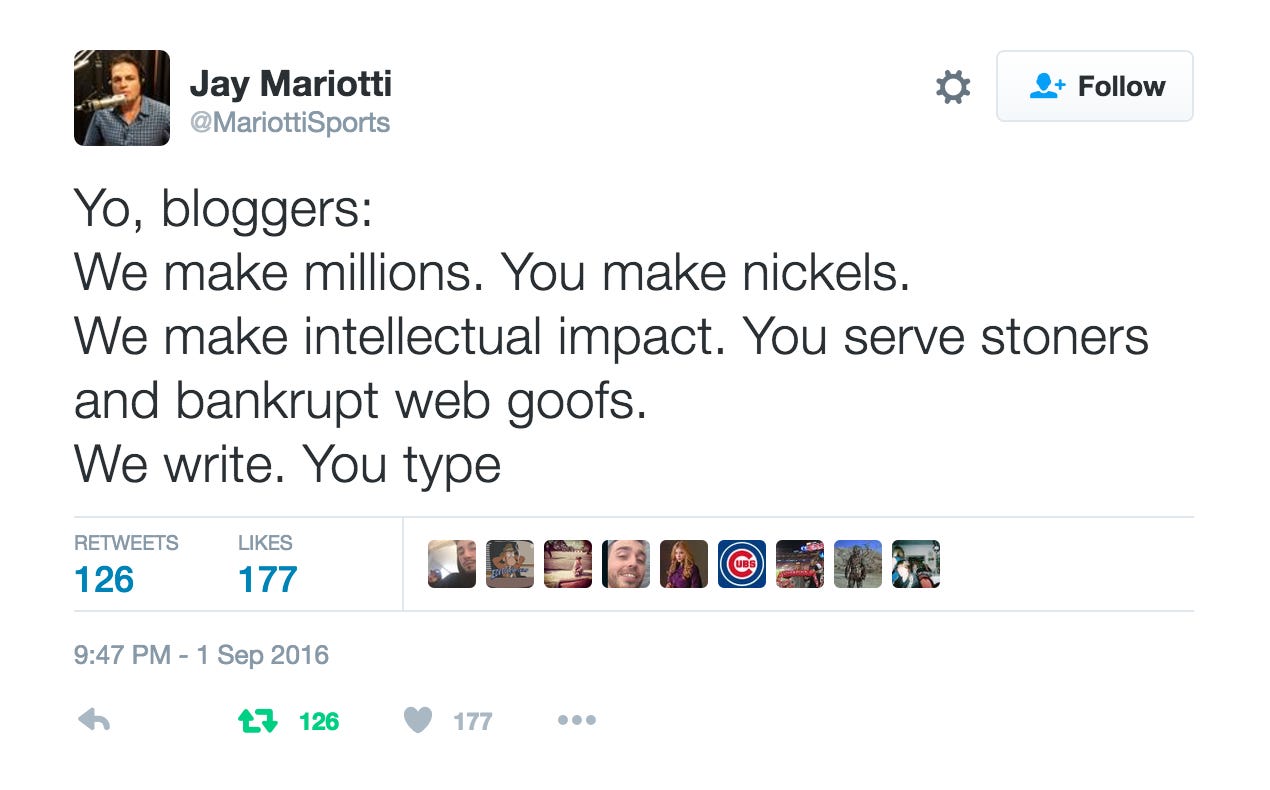 I write this blog from beyond the grave. Jay Mariotti just murdering bloggers everywhere. He put down his typewriter, took a break from stalking his ex girlfriend, figured out the Twitter dot com, and just spit flames to every blogger in their mom’s basement. Give all the skull emojis to Jay Mariotti.

So I just cant even comprehend what runs through your head when thats where you’re at in life and you fire off a tweet like this. Jay Mariotti, by every definition of the word, is a complete loser. He’s lost at life. He was accused of beating his girlfriend and ripping her hair out of her head. Whatever career he had at ESPN he completely flushed down the toilet. I’m pretty sure any colleague he’s ever had completely hates him. He’s just a garbage person in every facet of life. And so I just cant wrap my mind around being a Grade A loser like that and firing off a tweet about how you make millions and impact the world and you’re so talented and blah blah blah. When its just blatantly not even remotely true. You dont make millions, nothing you “write” impacts anybody at all. You dont have an audience – stoners, or otherwise. How can you lack self awareness on that scale? How can you think you’re Bill Simmons when you’re an absolute nobody? How can you think you’re in a position to judge anybody else’s career when you threw yours away because you were a scumbag who hurts women?

The “bloggers are nobodies” rhetoric is stale, lazy and tired. Its what old men in dying careers say. But at least its usually coming from writers and journalists who were actually successful. At least the guys who say that at least have a resume of some sort to back up the shit talking. Jay Mariotti’s resume includes losing fake arguments with Woody Paige and domestic violence charges. Delusional doesnt even begin to describe him.

Now if you’ll excuse me I gotta get back to typing for nickels, Jay. Go check in with your probation officer.