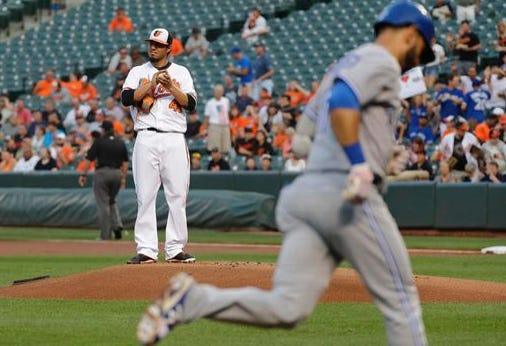 The Orioles entered August with a half game lead over Toronto and sat 14 games above .500 at 59-45. They also set a record for most home runs in August with 55, but after losing five of their last seven, and 10 of their last 16 to go 13-16 in the month of August, they find themselves in third place with a record of 72-61. The Birds have a lot of catching up to do if they want to win this division, they are two games back of Boston, four games back of the Blue Jays, and tied with Detroit for the last Wild Card spot. What happened to this club to have them fall this far?

Kevin Gausman went 4-2 in six starts with an ERA of 2.45, Chris Tillman got hurt, went on the DL, but not before going 1-2 in three starts with an ERA of 6.60. Tillman gave up 11 earned runs in just 15 innings and batters were hitting .305 off of him before he went on the DL. Dylan Bundy came back down to earth with a record of 4-2 and an ERA of 4.09, he had two rough starts against New York and Boston where he gave up five earned runs in both starts. New lefty acquisition, Wade Miley has not been the guy the O’s wanted when they traded for him. In August he went 1-3 with a 7.14 ERA, that includes a game where he went into the second inning with a 5-1 lead and got yanked. Ubaldo Jimenez stepped up for the O’s when they needed it, even if his starts didn’t lead to wins. He took Tillman’s spot in the rotation and threw two gems against Washington ( 6 IP, 1 ER, 4 Ks) and Toronto (6.2 IP 3 ER, 3 K). He had a 0-0 record in the month and an ERA of 3.92 including his relief appearances.

It’s never a good thing when three of your starters have an ERA over 5.00 in a month, especially a month when they needed to stay hot. Can’t put all the blame on the pitchers though, the bats need to come through. 4.5 runs a game during August isn’t terrible at all, but in games where your pitchers are limiting the guys to three runs or less and the bats put up 1, just not good enough.

-Manny Machado hit his 100th career home run the other night, becoming the youngest Oriole to hit the century mark. Machado, who has missed almost a full year due to knee injuries, overtook Eddie Murray as the youngest, at 24 years and 55 days. He was also the third fastest in terms of games played, Manny hit his 100th in his 578th game. The only Orioles to do so in fewer games were Boog Powell (564) and Chris Hoiles (577). He’s turned himself into one of the best players in baseball, and if the O’s make a run for the division, he’ll be up there in MVP voting due to his monster year. Here’s to many more Manny dongs.

-Mark Trumbo has been god awful since the All-Star break. I don’t think it has anything to do with his Home Run Derby appearance, because the bombs are still there, he just isn’t hitting right now. He is batting .178 (29/163) since the break, and 12 of his 29 hits since then have been home runs. He hit 10 in August, but again, did not hit for average, hitting .184 (18/98). He does have a league leading 40 homers, but this offense needs him to start hitting with RISP.

– A quick update on Chris Tillman. Tillman threw on flat ground on Monday and Tuesday, and had no reported setbacks, Buck did say it was unlikely he would make his start on the 9th or 10th, but they hope to have him back soon after that. Tillman has been the stopper on the season, and they need him back in a big way. Just have to hope he has no setbacks, and can give us the Chris Tillman we saw earlier this season. 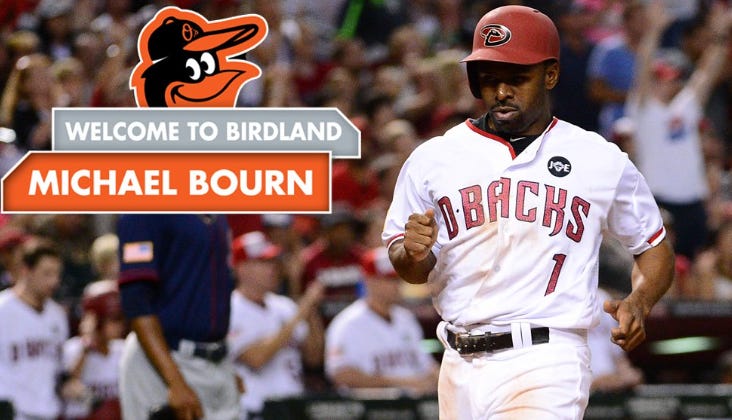 Dan Duquette was busy the last few minutes of the waiver trade deadline on Wednesday, acquiring outfielders Michael Bourn from Arizona for minor leaguer, Jason Heinrich. As well as claiming Drew Stubbs off waivers from the Texas Rangers.

Bourn can play all three outfield positions, which finally gives the O’s a backup for Adam Jones. With Jones hurt currently, Nolan Reimold was playing center, I hope I never have to see that again. Bourn was hitting .261 with 13 stolen bases with Arizona this season, so he had 1 less stolen bag than Baltimore had all year. He doesn’t have much power and doesn’t walk that much, I’d love to see his OBP a little higher and slide him to leadoff is Jones is going to be out. Overall, he is just a backup plan for Joey Rickard likely being out for the rest of the year, and Adam, and maybe will play a few games a week to keep Adam off his feet, don’t count on him to be a big contributor this season.

Stubbs, like Bourn, isn’t a big name, can play the outfield, and is a threat on the base paths. Stubbs has batted .259 with 3 homers and has 8 stolen bases split between Atlanta and Texas this season. These are just depth moves and not needle movers. Because the O’s basically gave up nothing for them, I’m fine with it. Like I said, I’d rather have Stubbs or Bourn in center instead of Nolan Reimold if Adam is going to be out due to this lingering hammy.

These moves didn’t really make O’s fans too happy, just because New York is out there getting better with their young guys, the Sox are calling up Moncada today, so that is two teams getting better while the O’s are kind of stuck in neutral.

29 games left in the regular season, for the O’s to reach 90 wins they need to go 18-11. Is 90 enough for a wild card spot? I’m not sure, if they went on a 20-9 run to close the season, that would put them in better position, but who knows how hot Detroit will stay, or if the Royals magic will run out, or if the Yankees remember that they are a bad team. O’s control their own destiny with several series against New York, Detroit, Boston, and Toronto all left, if the O’s take care of their business, they should find themselves in the wild card game. Time for the guys to step up, see if they can make one last run for a playoff spot.