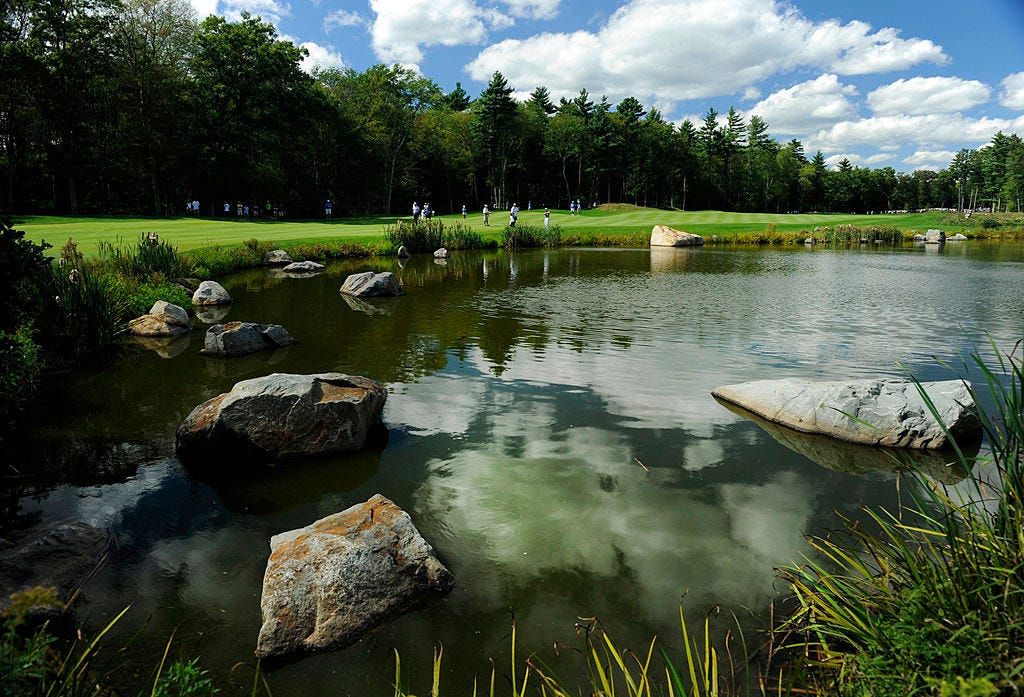 One down, three to go. Four weeks until the Ryder Cup. It’s crunch time for guys trying to extend their seasons, make the Ryder Cup team, and earn millions and millions of extra dollars. Last week was New York, this week is Boston. It’s the rare New England stretch for the guys. The transformation of the Duetsche from a “whatever” late summer event to a FedEx Cup playoff stop has made TPC Boston a prominent world-class golf venue. The final 100 players remaining on the toughest Tour there is. It’s good stuff and it’s produced big-name winners. Since 2006 (FedEx Cup began 2007):

This week’s winner will collect a $1.53 million paycheck and 2,000 FedEx Cup points. With the FedEx champ collecting a bonus $10 million check, there is considerable cheddar on the line. It’s a Friday start, Monday finish. Let’s do this. 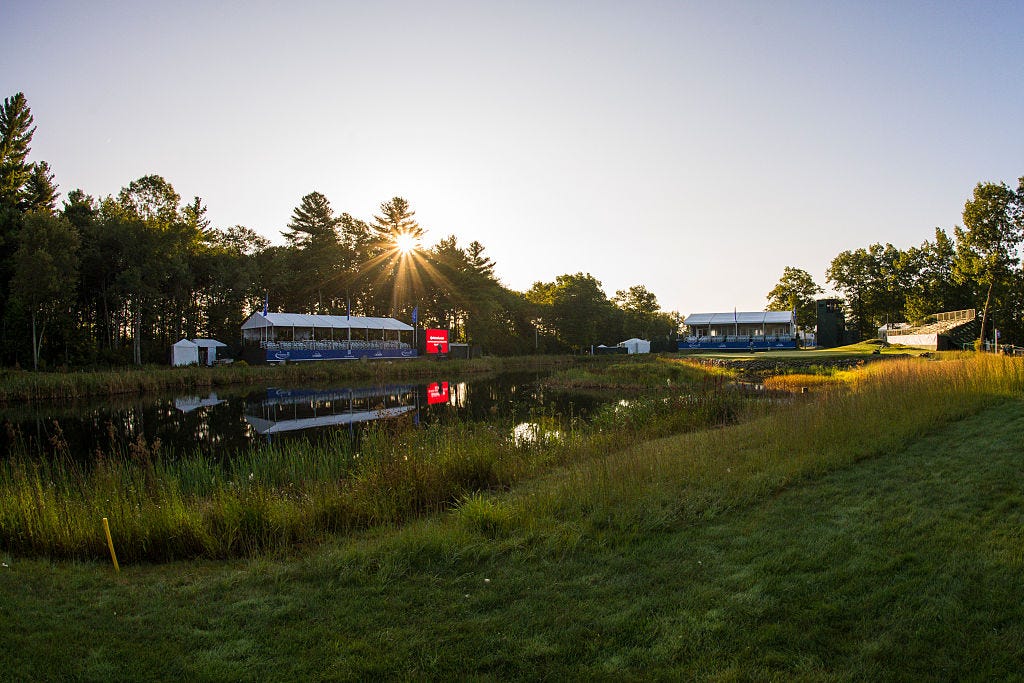 Huge, huge fan of TPC Boston. Played it for the first time a few weeks ago — it’s pure, fun, beautiful, tough, and fair. I was just about to shoot 69 but then I shot 83 (Tour tees). Whatever. These guys will do better.

This guy also did better… my buddy Mike teeing off through a tight window on 6. 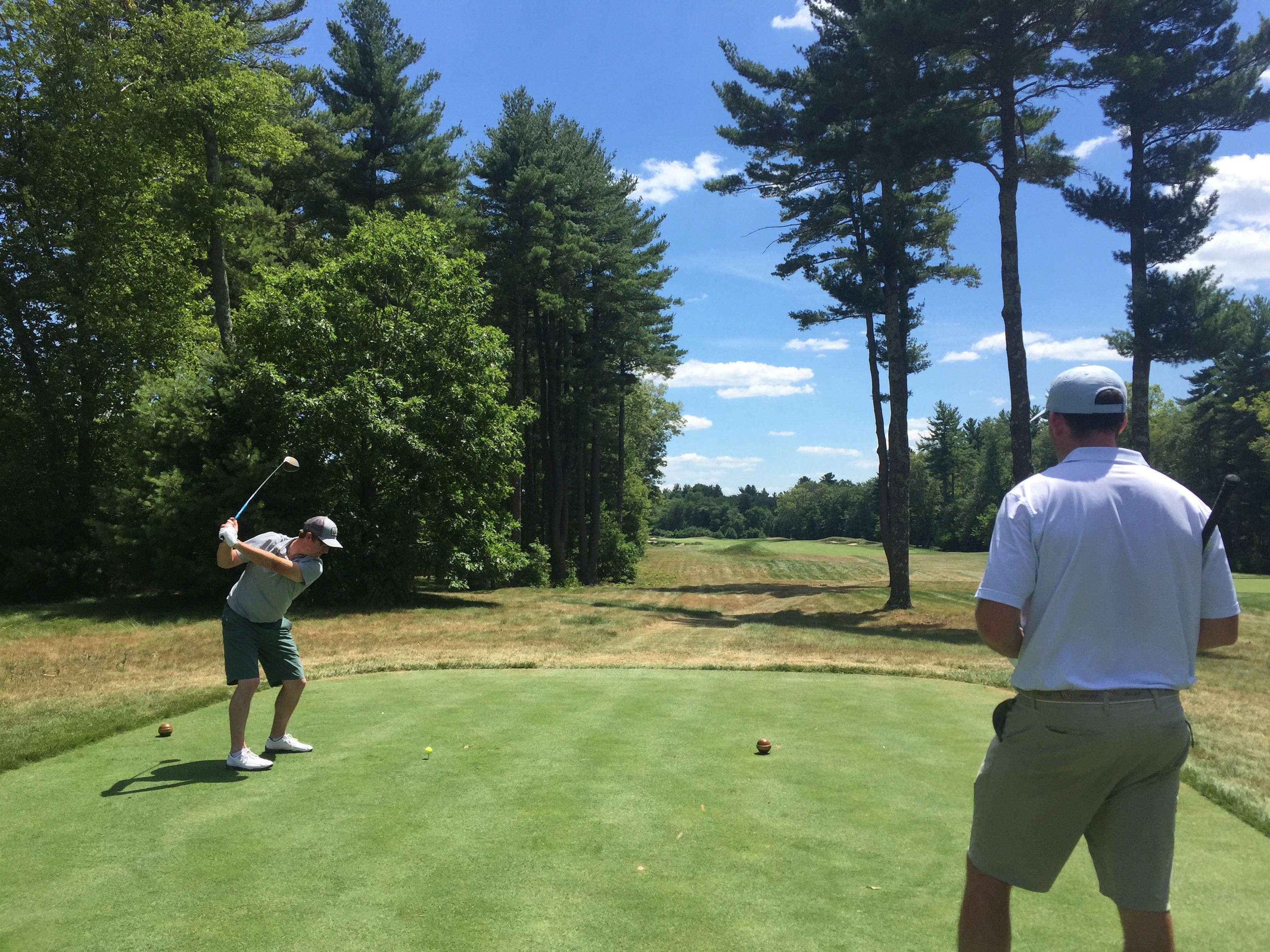 Here’s Richard, last year’s champ, on the same tee trying to hold off some sort of cut it looks like. 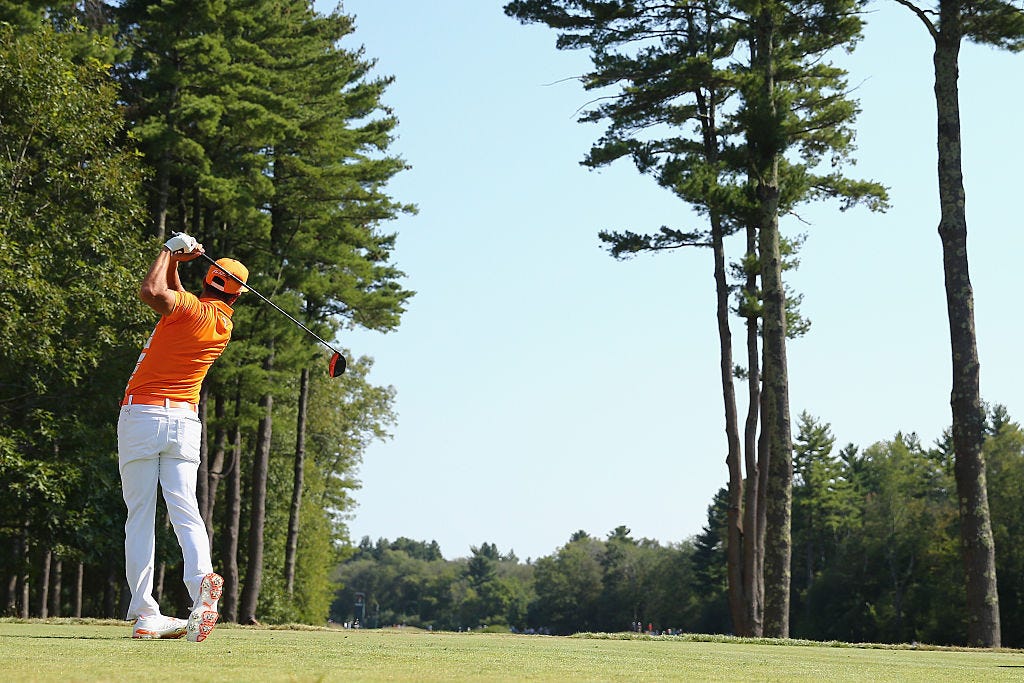 7,297 yards. Par 71. A very New England-ey topography. Gil Hanse and Brad Faxon renovated this place in 2007, bringing out more of the natural grass, bumps, and grass bunkers. It plays like you’re near Boston because you’re near Boston.

Getting up-and-down ain’t easy. It can be firm, dry and tangly — this pic I snapped from the side of the 231-yard par 3 eleventh is a great example. 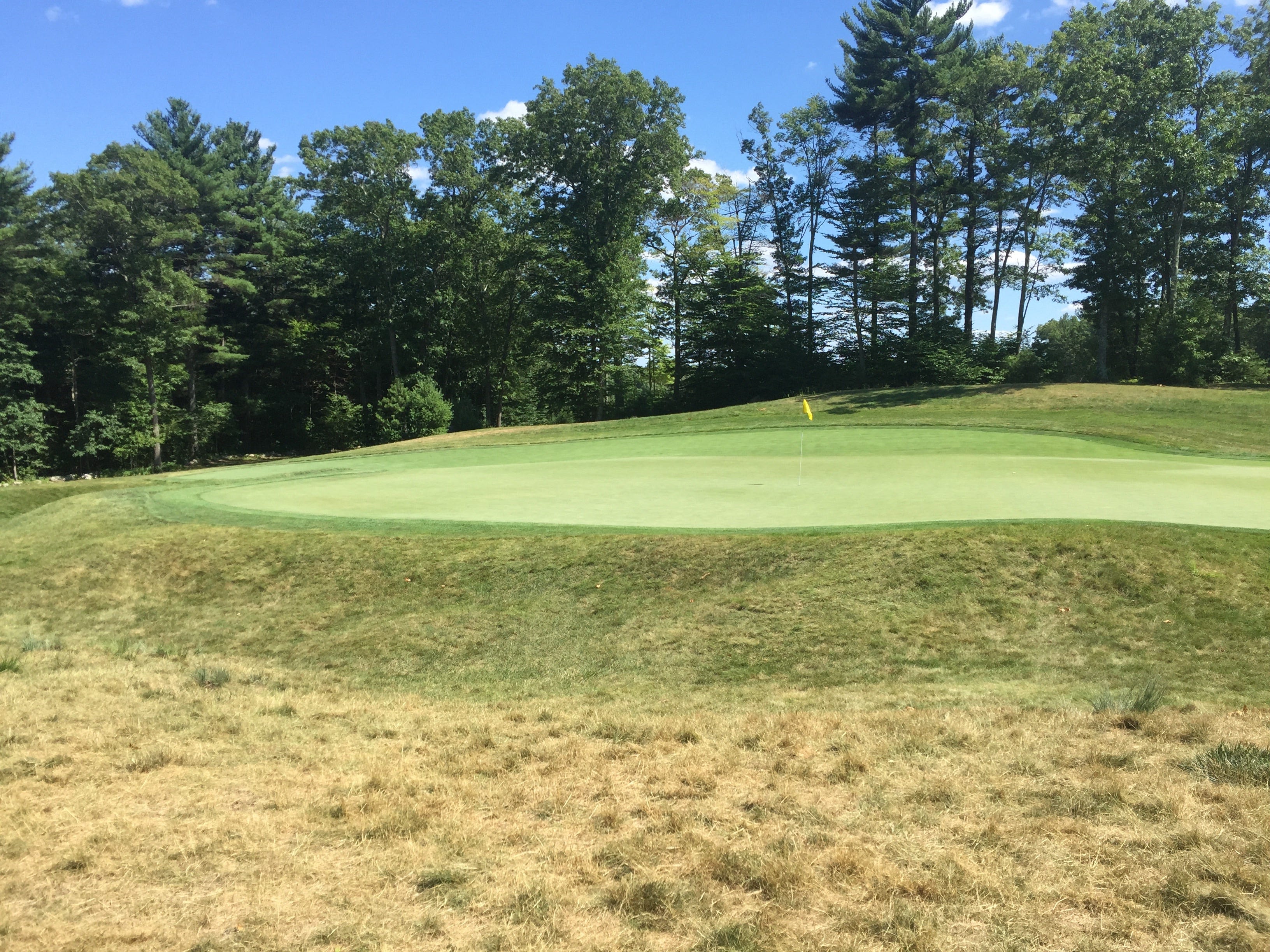 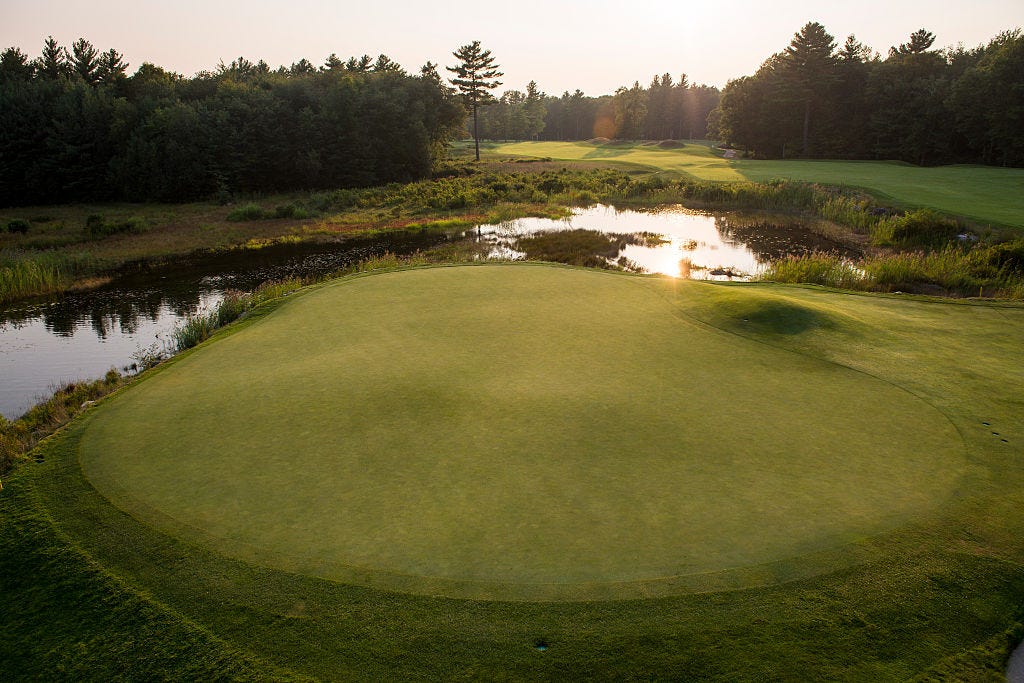 Slight dogleg right. Reachable with a good tee ball, but it’s all carry into this back-to-front putting surface. With a stone wall guarding the front edge, it can be an intimidating second — we’ll see plenty of bailouts to the left. The first is a relatively short hole, so guys will be hungry for some birdie-birdie starts here. (Highlight of my round = sticking it to 4 feet here. Lowlight = missing the 4-footer and tapping in for par) 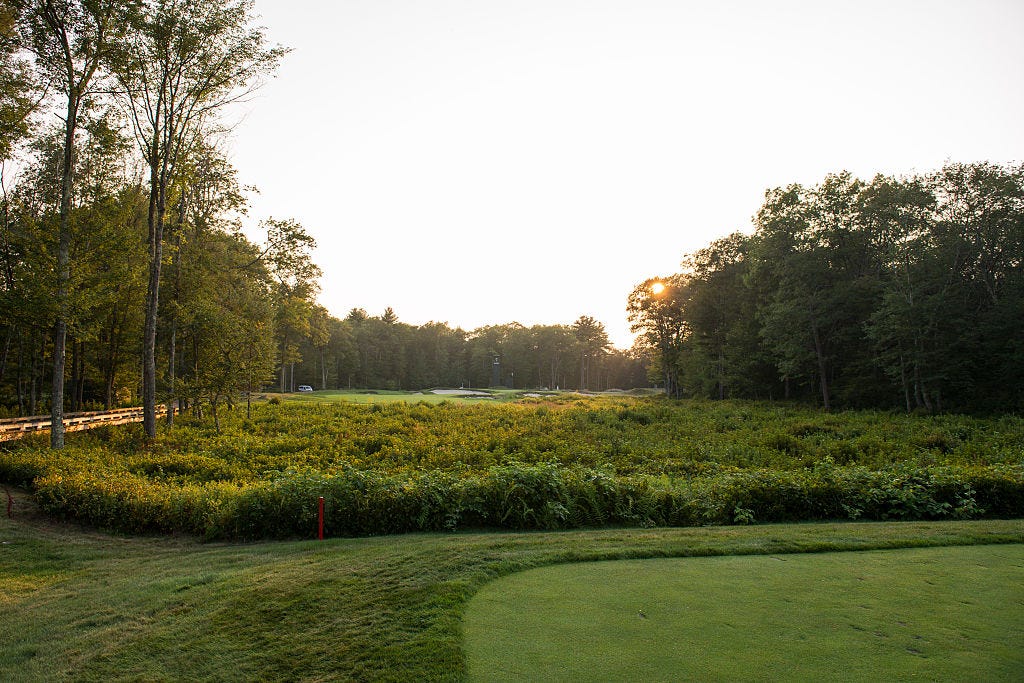 Ah yes, a driveable par 4. Love ‘em. This one’s got bunkers everywhere and, as you can see, makes you visually say “what the hell am I aiming at?” An aggressive tee ball will put most guys in greenside bunkers with pretty simple up-and-downs, but something offline makes 5 or worse incredibly doable here (trust me, I know). 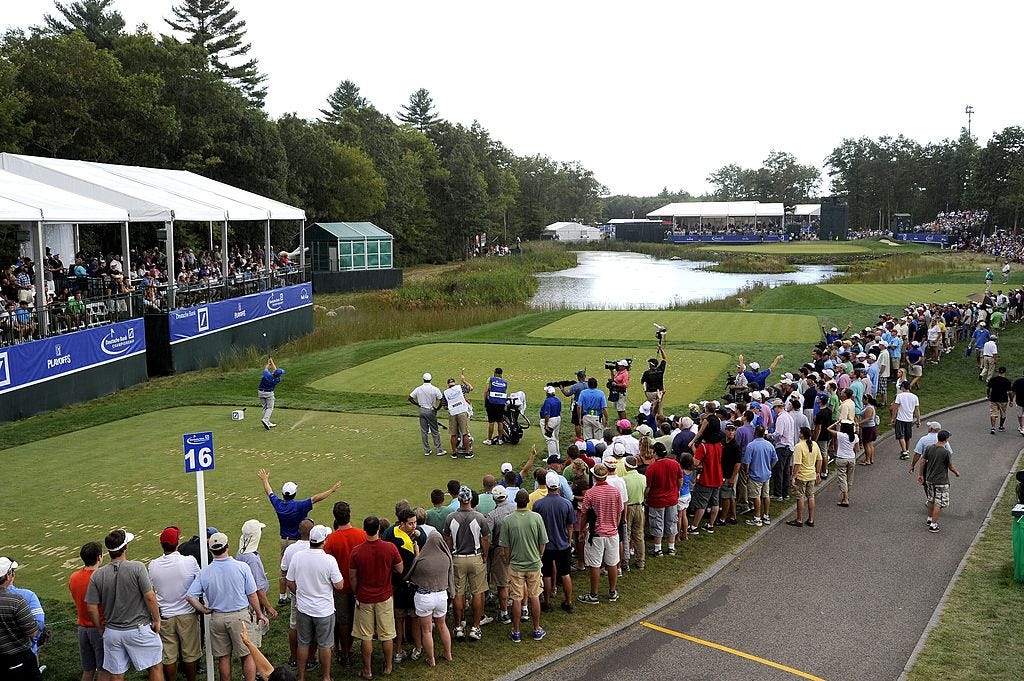 Gorgeous, cheeky little 3-par here. Card says 187 but with the different pin locations and tee boxes they’ll use, it will frequently play 15-30 yards shorter. With the exception of the right pin, the green contour funnels most balls towards the hole, so guys should have good birdie looks here. With water looming short and left though, miscues go heavily punished. Henrik made a brutal double Monday to lose the tourney just last year. 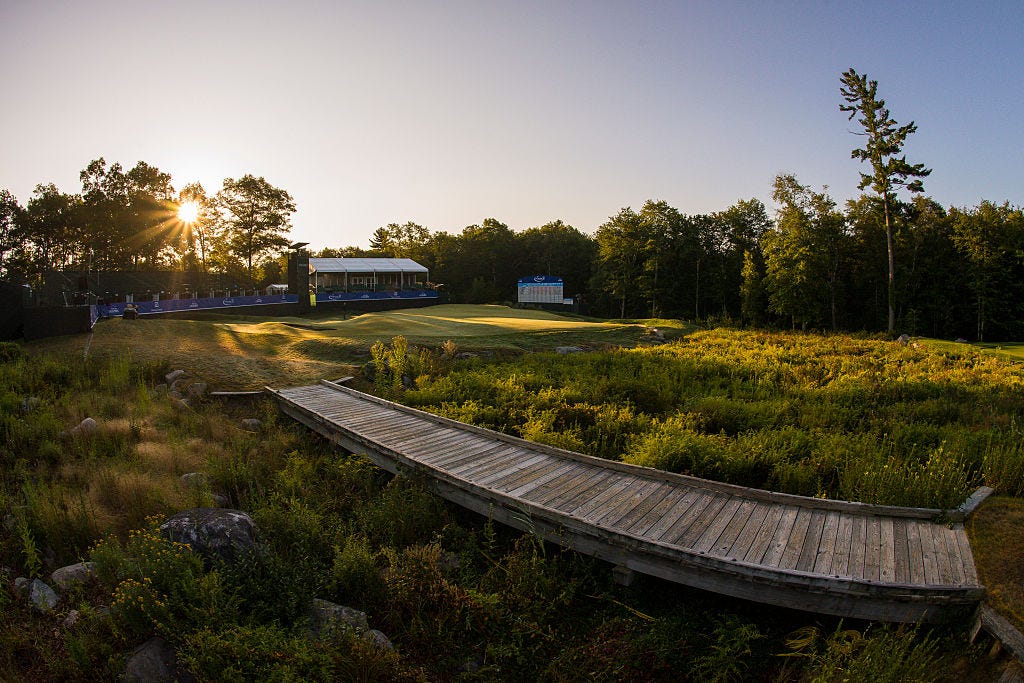 An electric finishing hole, this reachable par-5 rattles a lot of players’ cages. With any decent drive, everybody in the field can pump it over the ravine and get their ball green-high. But that’s where things get tricky. The renovation created a severe slope behind the green so, after players land it on or near the green and it trundles over, they have to negotiate this bad boy in an effort to get it close. 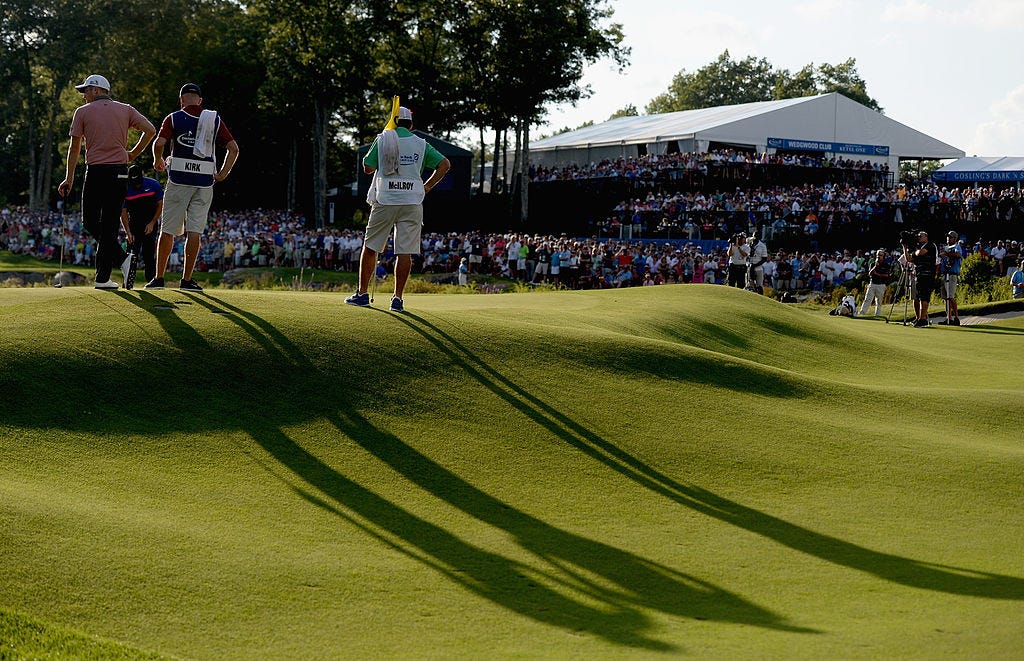 Do you bump it? Do you flop it? Do you try some weird in-between shot? Who knows. Add in that most balls trundle into some rough, on a downslope and yeah, good luck. No wonder the guys get rattled.

(Billy Horschel famously chunked his second shot here into the ravine to lose the tournament in 2014. It was awesome. Sadly he won the next 2 events, the FedEx Cup and $10+ million.) 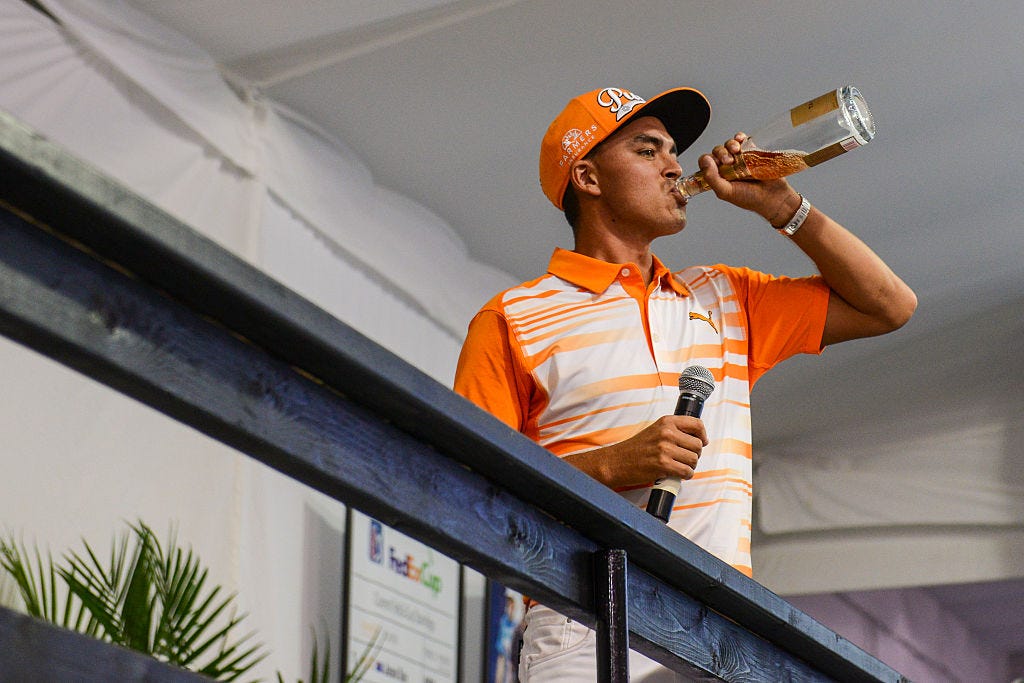 99 of the top 100 players on Tour this season are in Boston and ready to rumble. Masters champ Danny Willett the only guy opting out (he’s playing Euro Tour in Siberia or Switzerland or someshit). TPC Boston has produced some hall of fame champs for good reason — because the best players in the game show up to play it. Rickie is our defending champ and the no. 8 ranked player on the planet. I expect someone of similar caliber to take her down this Monday. 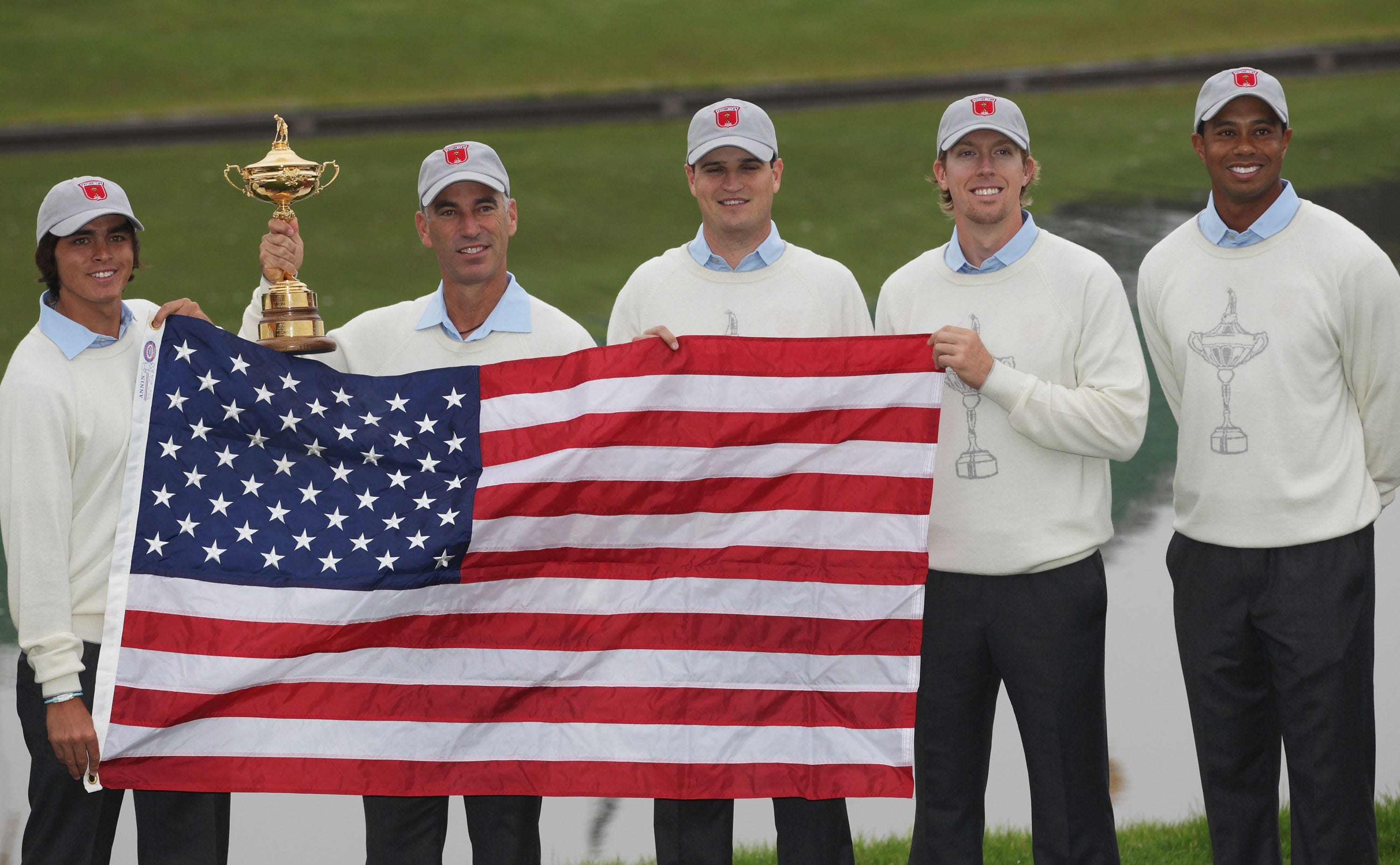 On our watch list is Bubba Watson, JB Holmes, Jimmy Furyk, Matt Kuchar, Rickie Fowler, Justin Thomas, Sean O’Hair, Ryan Moore, Gary Woodland, Daniel Berger. Although I have a painful, stressful concern that Davis Love and the gang are going to go with the underwhelming usual suspects (Furyk, Bubba, Kuch…), these names are all considerations for the 4 remaining spots. If they play well, if they win, if they show balls under pressure, they can catapult themselves to Minnesota at the end of the month. If not, we’re gonna get the same old and we’re gonna fear the same old results.

Beyond that, it’s the Jason Days and Adam Scotts. They’ll be jostling for position and looking to stack points up heading into the BMW. The FedEx is all about continually playing well so you have a chance at East Lake. They’ll be looking to do that and, as happens most often, I expect the cream to rise this week. Which leads me to everybody’s favorite part…

I’m not one to brag. I typically take Mr. McGraw’s advice, always staying humble and kind. But I’m going to brag. Last week I picked -9 as the winning score and Graham DeLaet to finish Dead Fucking Last. Patrick Reed won at -9 and Graham DeLaet tied for DFL (of the guys that made the cut).

I also picked Dustin Johnson to win and he finished 18th but whatever. Who cares. I’m hitting my stride going into Ryder Cup season. Don’t sleep on Riggs, Captain Davis. 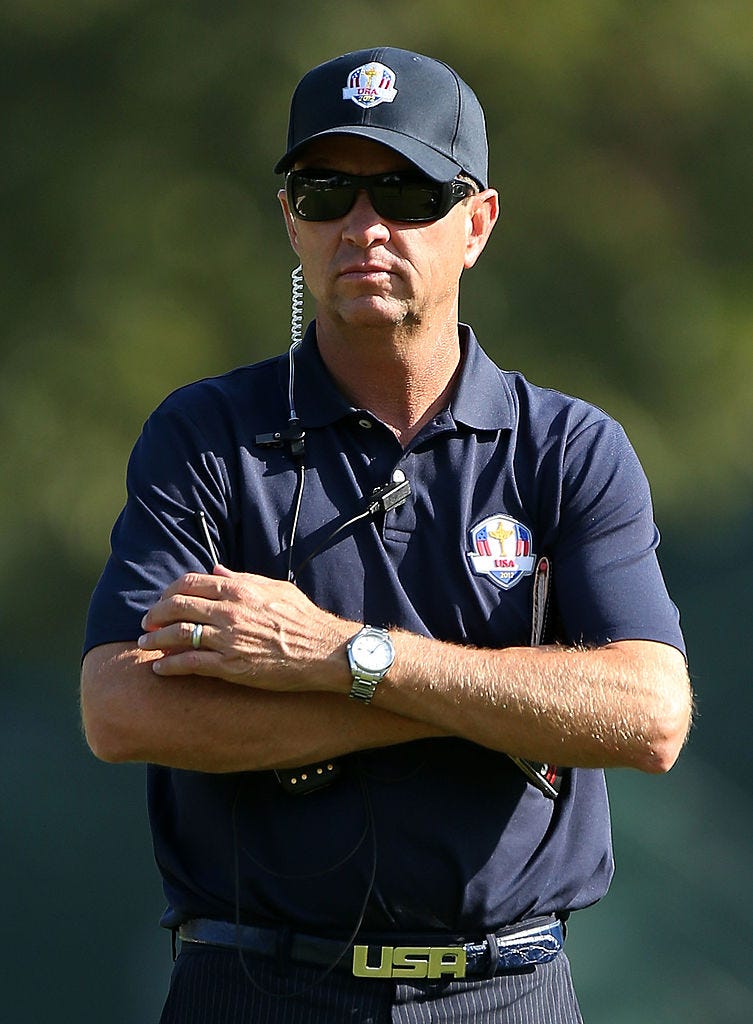 Rickie won it at 15-under last year. Stenson won it 22-under in 2013. That puts me in a tough spot — I like hard golf courses, but I like being right. I’m sort of splitting the difference and going with -17. Go lower than that and, well, touché.

Jason Day hit it like shit last week and finished T4. Two shots back. He was dead last in the field in fairways hit. So why the hell would I pick him? Because he’s that good. Because he’s the no. 1 player in the world. Because he’s got a cool Australian accent, a cute kid, a 100/100 wife and fucking crushes the ball. Jason wins at 17-under. It’s fun being right.

Hmmm here we are. The 100 best golf-playing humans on Tour this year and I have to pick the worst. I didn’t want this life but not everything is a choice. The bottom line is facts are facts and it’s a fact that someone will play the shittiest golf this week. After careful analysis of the field, the Official Steven Bowditch DFL Pick Of The Week goes to Aaron Baddeley.

I have no clue how this dude made the top 100 let alone is 56th in FedEx Cup standings. It’s shocking. He stinks. I guess it’s because he won the Barbasol Championship a few months ago which I thought held less clout than any local member/guest. It ran opposite the British but oh well. He’s here and he stinks and he’s DFL. Sorry Aaron. 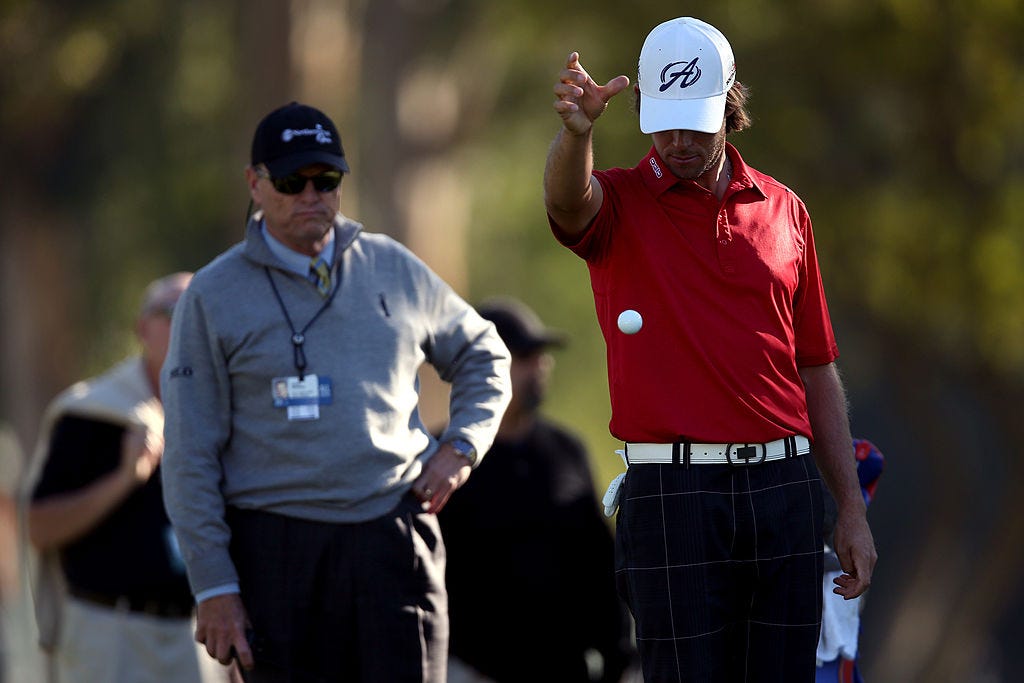 Thinking about hitting up the Deutsche Saturday. If anybody’s around and wants to have a beer or 30, hit me up. Always a fun event — hopefully see ya out there. I kinda look like an older version of this guy. 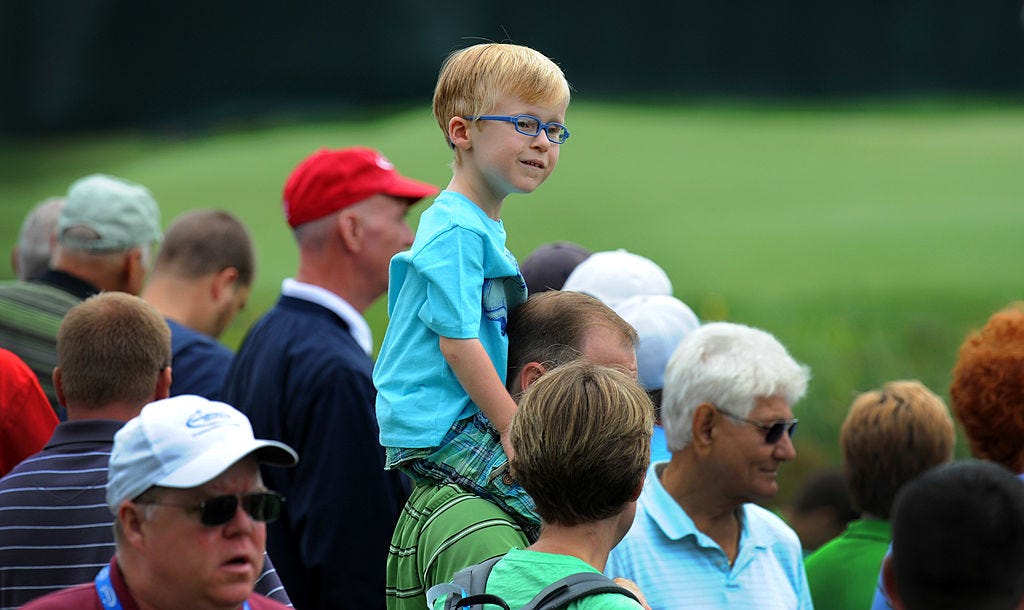