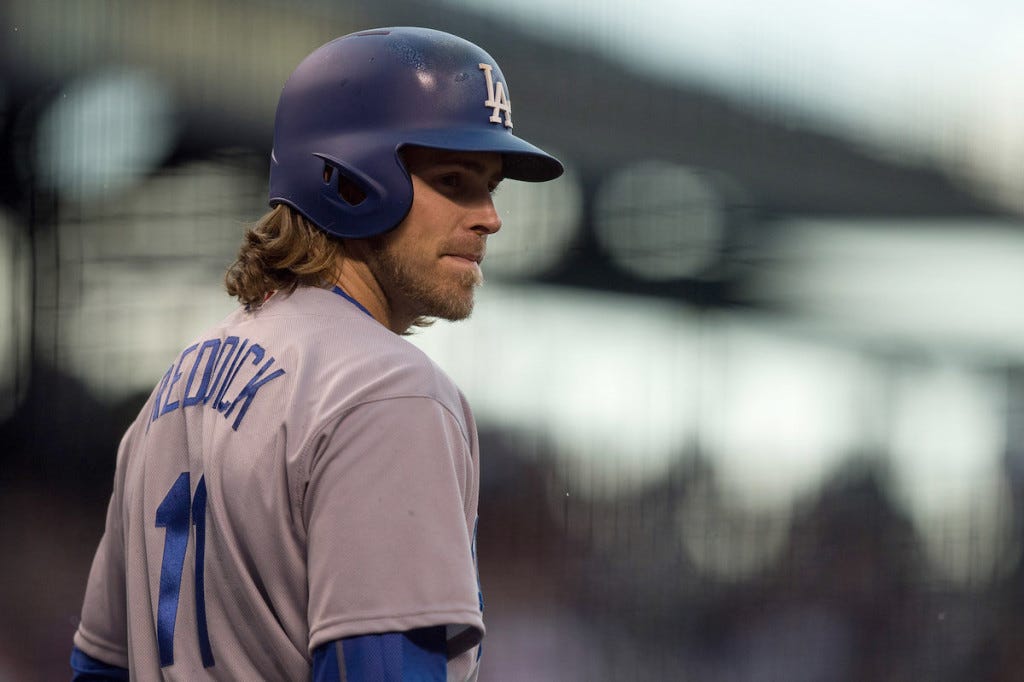 At the trade deadline, the Dodgers traded three right-handed pitching prospects, one who was actually a former first-round draft pick, in order to acquire left-handed starter Rich Hill, and outfielder Josh Reddick.

Here we are, three weeks later, and Hill still hasn’t made his debut for the Dodgers yet, although he will start tomorrow night against Johnny Cueto and the Giants. Big series for the Dodgers, as I wrote about this morning. And then there’s Reddick. Oh, Josh. Good dude, by the way. I met him maybe five years ago when the Red Sox were in Houston, and he was cool enough to shoot the shit with us for most of the night at the hotel bar. Good times.

But times haven’t been so good since he got to L.A. at the start of the month. In 72 plate appearances since being acquired by the Dodgers, Reddick is hitting .149 with a .373 OPS, no home runs, one double, and 12 strikeouts. Since his first game with the Dodgers on August 2, out of 187 players in the MLB who qualify, Reddick ranks 184th in batting average, 186th in on-base percentage (.208), 186th in slugging (.164), and 186th in OPS. Keep in mind, both Hill and Reddick are free agents at the end of this season, so the Dodgers gave up a pretty nice package in order to acquire two rental players, who have done absolutely nothing for them in the first month since the deal was completed.

And now this. Reddick apparently jammed his finger in a door on Sunday, while ordering room service, and that’s what kept him out of the Dodgers lineup on Monday, although he did later pinch hit in that game and popped out. Do I actually believe the door story? I don’t, but I also don’t really care to know what actually happened. I’m sure he was probably just fucking around, and something happened to his finger. Irrelevant.

What is relevant, though, is that Reddick has statistically been one of the worst, if not the worst, hitter in baseball since he was acquired by the Dodgers. Couple that with the fact that Yasiel Puig is hitting .417 with a 1.219 OPS since he was demoted to the minors, and does that open the door back up for a Puig return in 2016? All I know is, if Reddick continues to suck as bad as he has, and Puig continues to rake in the minors, and they DON’T call Puig back up, you’re never going to see him in a Dodgers uniform again. One hundred percent, he’ll get dealt this offseason. Because, if you don’t call him up under these circumstances, when will you?