NY Post- A man was climbing the side of Trump Tower in Midtown on Wednesday afternoon — prompting a massive police response. The climber had made about five floors above a landing, and appeared to be using giant suction cups for his ascent. Police raced to the scene and appeared to be trying to talk the dare-devil down.

Just beware that there is a reporter on the scene named Jim Dolan, which will send every Knicks into a PTSD haze.

UPDATE: The cops have gone in through the vents and we have a slow developing game of cat and mouse going on.

We got some hot takes from the news crew:

Here are the measurables of who we are dealing with here:

And a look of what’s happening inside the Casa de Clem:

Everyone talks about the fun side about running for President. Having millions of supporters and a chance to become the most powerful person in the free world. But nobody talks about the other side of the coin. The long hours, hard work, and threats on your life that come along with it. Oh yeah and all the weirdos. You know The Donald must be soooo pissed this asshole is climbing his tower. Trump probably loves that building more than Terry Benedict loves his vault. He’d probably rather have this guy take a run at Melania than climb his tower. Now he has to hear people saying how is his giant wall going to keep Mexicans out of the US if he can’t keep weirdos off his prized tower.

We saw these kind of weridos at the RNC and DNC. Some of them kinda blended in with the Barstool Juggalo video too. And this goes double if your home base is in New York City like Trump’s is. First we had the nutbag model dancing naked in Times Square, and now this. A human fly. The biggest security threat to someone living in Manhattan. While you can load up the lobby of your building with doormen and security, New York is clearly not prepared for some lunatic climbing up a skyscraper’s soft underbelly using suction cups. And you can’t be anything but a lunatic if you are on a skyscraper using suction cups. Even the window washers are out of their fucking minds, but at least they are getting paid. The weirdo population in New York is truly like Ghostbusters right after the Containment Unit was shut down. A scary time for normal folks, but winning time for smut bloggers. Suction cups, so hot right now. And I feel like many people are rooting for this guy to fall but not die, which unfortunately looks to be impossible. 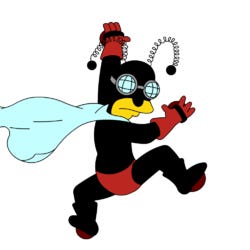