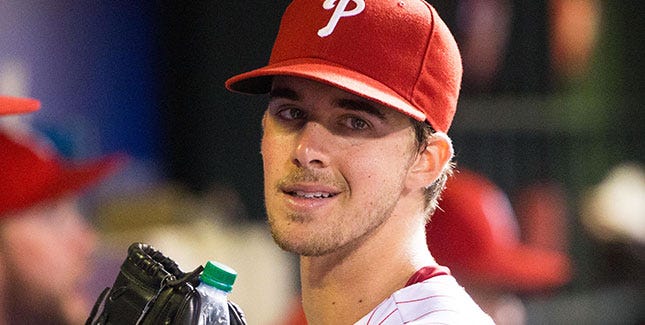 Phillies place Aaron Nola on DL with elbow strain. Phil Klein comes up from triple A to start tonight

Not good, not good at all. I had a feeling this was coming too. Primarily after watching his last start where he averaged a season low 88.5 MPH on his fastball. I was watching him and wondering, why is the ball not moving like it usually does and the gun is only reading 87-88 every pitch. I am reading he has been hurting since June, which sounds about right considering his numbers since June 11th have been off the charts bad.

Whether they are just saying this to give him another breather or he does in fact have something going on with the elbow, either way I wouldn’t bet on him returning this season. The term “elbow strain” is never good. In fact over the past week, pitchers Wei Yin Chen, Colin Rea and Wade Davis have all been placed on the DL with the same injury. In 2014, Jose Fernandez went on the DL with an elbow strain which ultimately resulted in him getting Tommy John Surgery. That would be an absolute worst case scenario for Nola and my heart.

I guess the silver lining in this is we will finally get to see Jake Thompson in a phillies uni. Phil Klein, who was recently grabbed off waivers from Texas will make the spot start tonight and Jake Thompson should be next in line. Thompson has a 1.21 ERA in his last 11 starts for the Triple AAA Lehigh Valley Iron Pigs.

I will miss this.