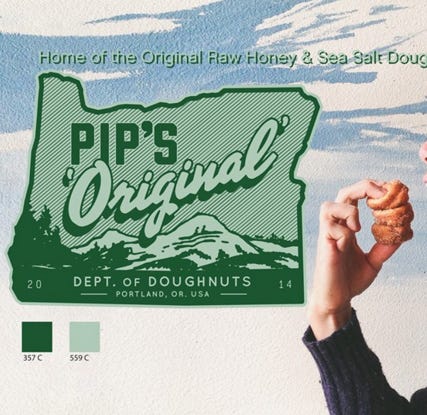 Fox News - An Oregon doughnut shop is hiring—just not any vegans or vegetarians. A job ad for Pip’s Original Doughnuts in Portland describes the ideal candidate as someone with “a friendly, outgoing personality,” but “no non-medical, non-religious dietary restrictions” that “would stop you from tasting, accurately representing our treats, and maintaining quality control.”

Given that PETA recently named Portland as America’s “most vegan-friendly city,” the ad is not going over well, reports Oregon Live. “Won’t return now that I know you discriminate against vegetarians,” one customer writes on the bake shop’s Facebook page. But co-owner Nate Snell isn’t budging.

“After receiving as much hate email as we have in the last two days, I’m more steadfast and sure of our position than ever,” he writes. Snell says employees are required to taste shop items that contain bacon, gluten, soy, dairy, and nuts. Those unable to do so “would place an undue burden on our ability to maintain the quality of our food and the health of our customers and employees.”

Reason 958,495,493 vegans are the worst. No, not all vegans, but this is why they have such a bad reputation. They can’t just be happily vegan. It has to be all about them, all the time. Because they make a decision about how they live their life, you need to make the world revolve around them. Case in point- this donut shop, Pip’s. Pretty basic requirement for working at a place that serves food, please be able to try our food.

Welp, vegans did not like the fact that Pip’s would only hire people who could preform the duties of maintaining the highest standards of food safety and excellence. How dare you make the best hiring choice for your small business if it’s not all about ME! 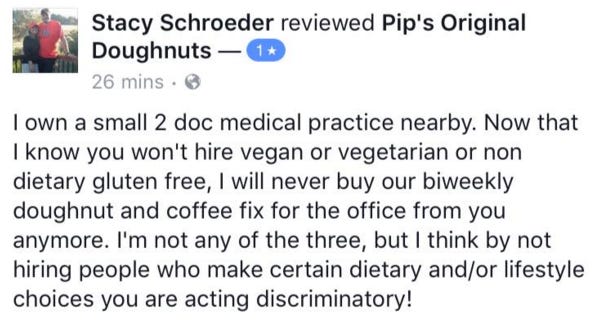 Oh, fuck off. Calling it discrimination is so stupid. I wouldn’t hire a deaf person to listen to music, so no I won’t hire a vegan to work at my donut shop. The shop owner, after getting the usual wrath of the internet hive-mind from hippies and assholes in Oregon and beyond, doubled down on his stance: 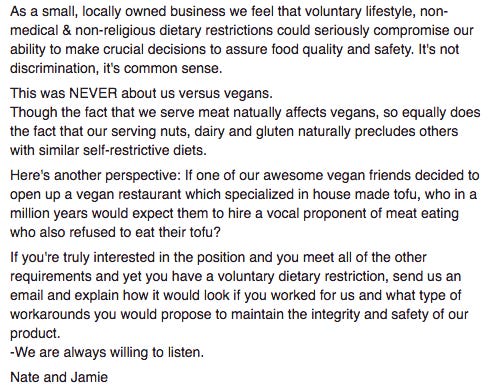 So now this place has to deal with all sorts of 1 star reviews on the Internet because holier than thou vegans didn’t get their way. But at the same time, I think the good publicity from them standing up to the Internet mob will balance that out. I think the lesson here is you don’t always get your way. I’m not going to be hired to be a model because of my face, and you aren’t going to be hired to work at a donut and coffee shop because of your stupid diet. Just find another job, and let the Earth keep spinning.