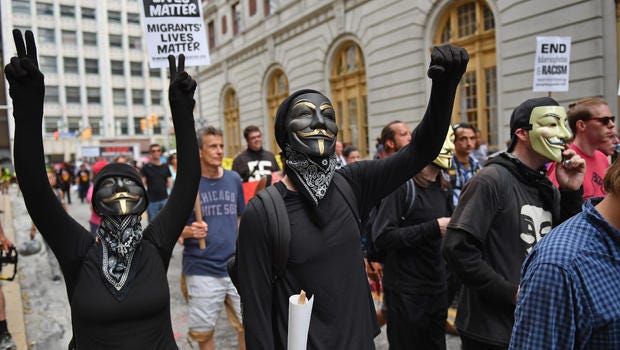 The Blaze – Hundreds of dueling protesters clashed Tuesday afternoon in the humidity just blocks away from the GOP convention, at times throwing urine at one another.

Cleveland police confirmed to TheBlaze that some protesters had filled water guns with urine and were using the guns to spray those with who they disagreed as the different factions clashed in Public Square.

Among those demonstrating were members of the Westboro Baptist Church, KKK, Black Lives Matter supporters and men wearing the popular Guy Fawkes masks.

The Bloods vs the Crips. The Jets vs the Sharks. The KKK vs BLM vs The Westboro Baptist Church. The only thing I could possibly equate this royal rumble to would be the scene from Anchorman when all the news stations go to war.

Only better because this fight involved water guns filled with piss. I mean talk about unreal planning by these protesters. This is how I know I’d be way out of my league with these kooks. The thought to piss into a Super Soaker wouldn’t even cross my mind heading into a protest. But as it would turn out, it’s the weapon of choice to the pros.This is why we must always fight to preserve the 2nd Amendment. So that idiotic protesters can exercise their right to douse each other in urine while fighting for their flawed morals and ideals. It’s the most American image I can possibly come up with. Now I just need to know on whether or not there is an unwritten agreement on asparagus consumption prior to loading up the ammunition. It’s all fun and games until somebody shows up with water balloons filled with piss straight off of eating an entire plate of asparagus. Then we might have some death on our hands to report and dead people usually aren’t that funny. Even if it’s the same people that brought us this fun family jingle.

Also, I don’t know where else to put this but it’s too good to leave out sooooo here ya go.

Still waiting to hear back from the fact checkers on this one but this is YUUUUGE if true.