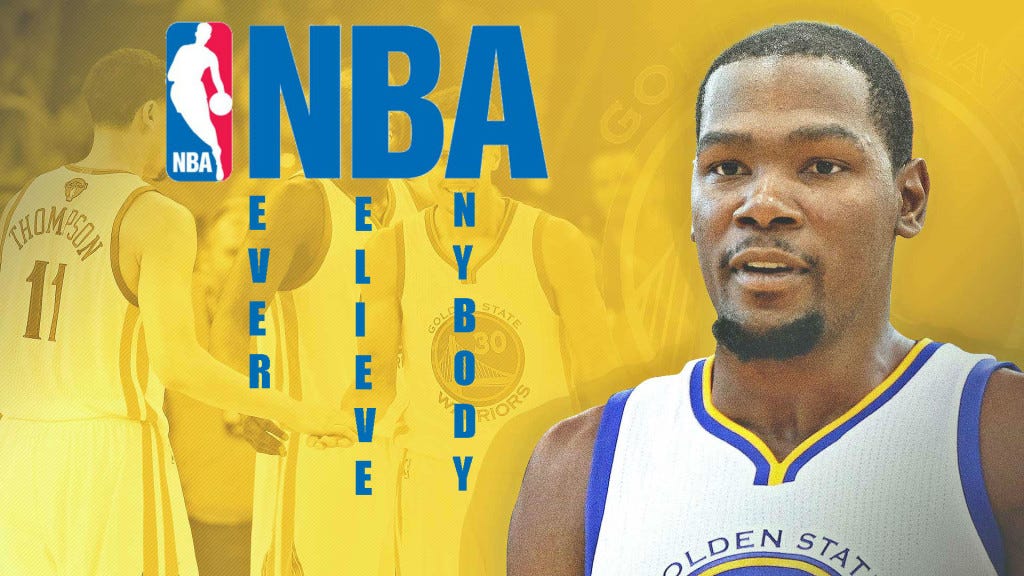 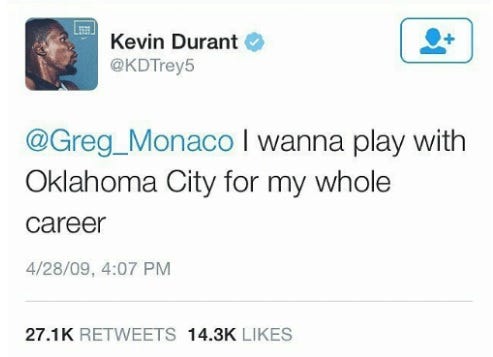 Yesterday Kevin Durant really put the ME in America by trying to hijack the 4th of July with his decision to leave Oklahoma City for the Golden State Warriors. However, unlike our forefathers who founded this great nation we live in today, Kevin Durant played the role of Benedict Arnold and drove a giant knife directly in the back of the Thunder and OKC fans everywhere. But that’s just the current state of the NBA. A league where honor and integrity mean nothing to the players. A league where selfishness is rewarded and the fans are left there feeling like Draymond Green just kicked them square in the dick. And all I’m going to say here is that no superstar in the NHL would ever even think of doing such a thing. 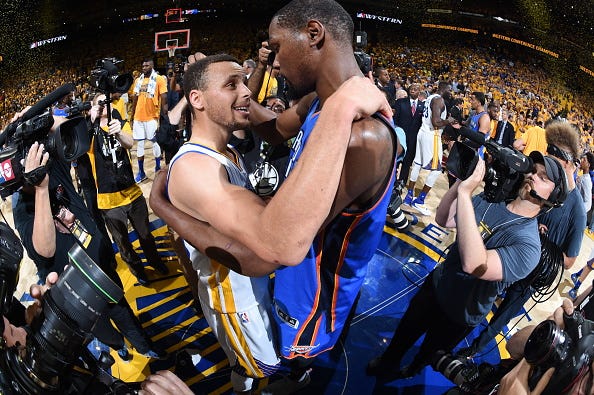 Here’s a photo of Kevin Durant embracing Steph Curry after the Warriors knocked OKC out of the playoffs this season. The team that came back from being down 3-1 and then crushed the Thunder’s hopes and dreams of winning a championship. And what does Kevin Durant do immediately after the game? He hugs his “enemy” and then joins said enemy just one month later. Now take a look at this photo. 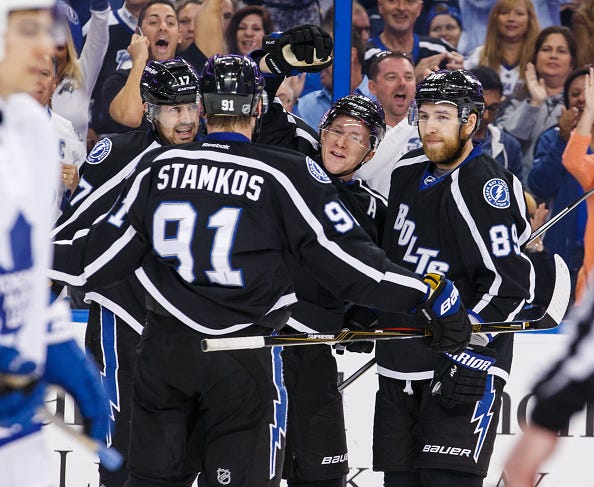 Here’s Steven Stamkos. For those of you who are unaware, he was scheduled to be the biggest name in free agency this year. He had teams like the Buffalo Sabres about to throw $12 million a season his way. He had teams like the Toronto Maple Leafs ready to give him the keys to the city. Offers about to start flooding in from Detroit, Montreal, pretty much every team was willing to rob a bank for this guy. But take a look at that photo. Notice the only people he’s about to hug. It’s not his opponent, it’s his teammates. Which is telling because instead of abandoning the team that has made him the man and player he is today, he decided to re-sign with them before LOYALTY and INTEGRITY means a little something to these guys. The old saying goes “If you can’t beat them, join them”. But that saying is for pussies. That saying is for a bunch of baby back bitches like Kevin Durant. The real saying goes “if you can’t beat them, beat them up”. Actually ask yourself if you think any hockey player would leave his current team to join the assholes who just beat them in the playoffs? The answer is hell no. You’d get your ass kicked for even thinking about doing a thing like that.

The knock on basketball is that you’ve only ever had to really watch the last two minutes of the game. Nothing happens in the first 3 quarters and then with 2 minutes left, everybody suddenly starts to care. Well now it’s even worse because you can say that for pretty much the entire season at this point. Teams in the NBA are just trying to build super teams so the regular season doesn’t even matter anymore If it weren’t for Golden State about to go 81-1, there would be no need to watch regular season basketball. Hell, there’s no need to watch the majority of the playoffs either. The only two games that will actually matter next year will be game 6 and game 7 of the NBA Finals when it’s Golden State for Cleveland again. You think the players in the NHL would ever let the league get to that point? Shit no. It’s a little thing called parity. Ever heard of it? Because it’s not the fake twitter accounts of famous people. It’s having a league in which any team can beat their opponent on any given day. That’s not the NBA way though. There’s about 2-4 legitimate teams out of 30. And it’s not because basketball is stupid and soft and lame. But it’s because the players in today’s game are.