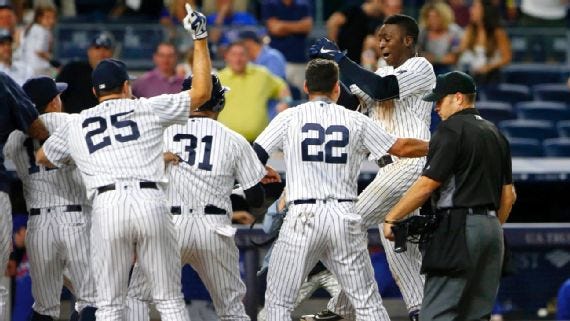 This team is a goddamn roller coaster of emotions. Sitting just 3 outs away from our 4th straight loss, this team found a way to turn the game around and end up with a walkoff win against the best team in baseball. Some might even argue that coming from behind to beat the team with the best record in baseball, makes the Yankees the new best team in baseball. At least that’s how it works in wrestling.

Obviously last night was an exciting win and makes you wonder things like “What if this is the beginning of 12 in a row?” but we should be cautiously optimistic. Just a few weeks ago The Yankees swept The The Angels Angels of Anaheim in a 4 game series and it seemed like things were set up to finally make the run we’ve all be expecting. That hope turned into a mere 6-5 run against The Rockies and Twins which was a blown opportunity to makeup ground.

Back in May, The Yankees rattled off 6 wins in a row to get make us all think that the first 6 weeks of the season were a fluke and the bats were awake for good. The streak led us to a 4-8 run and showed us that there was still a ton of work to do and rough roads ahead. Looking at these 2 stretches, you can see why we should all be hesitant to say that this one game is the turning point. At the same time though, if this team is ever going to make a run, it has to be now.

The Orioles are playing way above where they should be. With a division lead of 5.5 games and The Yankees a full 9 games back, it is really hard to see not only the Yankees turning things around, but also jumping 3 teams to win the division. With the addition of the 2nd Wild Card spot, we’re only 3.5 games from a playoff spot but would need to jump 6 teams to claim that spot. Again this isn’t an ideal situation.

With only 11 games left before the break, this is the only chance that THIS team will have to make a run. If we finish out the first half going 6-5 and continue to be mediocre, this team will be broken up so they won’t have eachother to play for anymore. Beltran, Chapman and Miller are all extremely valuable trade pieces so if this team isn’t going to show that they can not only make the playoffs but make a deep run, it will be time to punt this season away. As Yankee fans we never expect to be sellers but without some miraculous run over the next 2 weeks, one game won’t be enough to save this season.