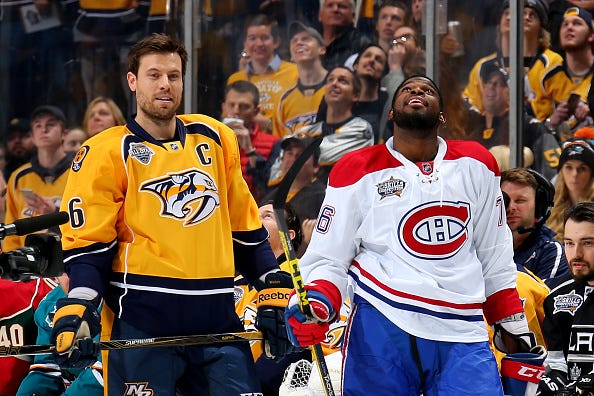 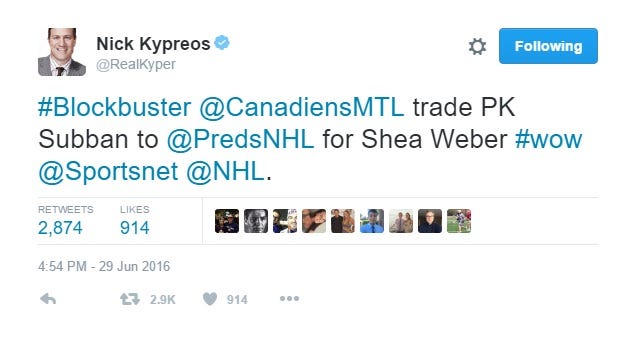 There have been rumors for weeks that the Canadiens have been looking to shop PK Subban. And every single time it was met with “yeah right, like the Habs would ever be dumb enough to let PK go”. Weeks and weeks and weeks of PK Subban trade rumors. The face of the organization. The man who has donated so much time and so much money to the city of Montreal. As if Marc Bergevin could side with Michel Therrien over his superstar. Yet here we are. Wednesday afternoon. June 29. And the Montreal Canadiens have moved PK Subban to the Nashville Predators for former Flyer great Shea Weber. Now obviously the names involved in the trade are huge and there is a ton of shock factor that comes along with that. But let’s try to make sense of this trade somehow anyway.

Shea Weber is the exact type of steady rock on defense that the Canadiens need, especially with their instability in net. PK Subban has star power. He’s a game changer. He’s an X factor. But there’s always an element of surprise to his game and sometimes that can go well, and other times it can be bad. It’s clear that without Price in the net that the Canadiens are not a very strong hockey team. Part of that is because they have literally nothing on offense. But another part is because there’s just not a lot of confidence on their blueline in their own zone. Shea Weber helps the Canadiens out immediately. He may not be as entertaining of a player as Subban, but it’s not like the Canadiens get any worse by this move at all. But they also don’t even come close to winning this trade by any means. His cap hit is almost a little more than a million dollars less than Subban’s but he’s signed until he’s like 40 so who knows what the thought process behind making this a straight up trade was.

As for Subban going to Nashville, well obviously Nashville immediately gets more entertaining to watch now. Between Forsberg signing his extension, having Ryan Johansen in the mix and now PK Subban on the blueline… well the Predators are in a great spot moving forward. Does Subban’s $9 million cap hit hurt their ability to make any more moves in the future? Yeah, sure, obviously. But they don’t need to make any more moves. They have their guys. They have their core. And this is actually a great spot for Subban to be in because now he doesn’t have to be that guy on the blueline. He has Roman Josi and Ryan Ellis to rely on for defensive purposes. He can be more of a puck carrying defenseman without having to worry about his defensive downfalls as much (even though he’s been slowly getting better at that part of his game). Does it suck that he has to leave Montreal? Yeah. It’s clear that Montreal meant a lot to PK and that PK meant a lot to Montreal. But as far as landing spots go, I don’t know if there’s a better place for him than Nashville.

Well it looks like I can just take Friday off now because there is noting left to see come Free Agency. That $8.5 million number has been thrown around for a few months now and it looks like Stevie Y was finally able to convince Stammer to take the hometown discount and stay in Florida. When you see that number compared to other guys like Kopitar getting $10 million, obviously it’s a bit of a head scratcher. You can look at the fact that Florida has no income tax which means that he’ll actually be taking home more with this contract in Tampa than he would with a $10 million contract in Toronto. But it was still a concern that Stamkos would get caught up in a dick measuring contest with the rest of the guys in the league and want to set the new standard. But Tampa gives Stamkos the best chance at winning a Cup right now. They have everything they need. They have a young crop of talent. They have a stud on D with Hedman. They have Vasilevskiy in net who can fill in for Bishop once he leaves. They were in the final two years ago. They were in the Eastern conference final this past year. The only reason to go to Toronto would be to be that guy to bring Toronto their first Cup in over 50 years. To restore hockey’s homeland to greatness. To bring them back to the promised land LeBron James style. But in true hockey fashion, Stamkos hates LeBron and said fuck that story. Time to stay on the beach in Florida and win a goddamn championship.

I Look Forward To Hating Taylor Hall For Now On

This was the first domino to drop today and when all is said and done, it’ll probably be forgotten by the rest of the moves. But the Edmonton Oilers are looking to dump some space to bring in Milan Lucic on the left wing. So a salary cap casuality to make that a reality was to send Taylor Hall to the New Jersey Devils in return for Adam Larsson. Obviously the Oilers need help on defense. Does Larsson give them a little better lineup than they had last year? Sure. But this deal is a fucking ROBBERY on New Jersey’s half in a straight up trade. Somebody needs to figure out what bar Chiarelli was drinking at today and make sure they cut him off forever. Because holy shit is this one sided. Larsson is good. Don’t get me wrong. But Taylor Hall is an all star. One of the best left wings in the game right now. And to just go player-for-player here and downright preposterous. So now the New Jersey Devils are back. And that makes my life miserable. But then again, when isn’t it as a Philly sports fan?