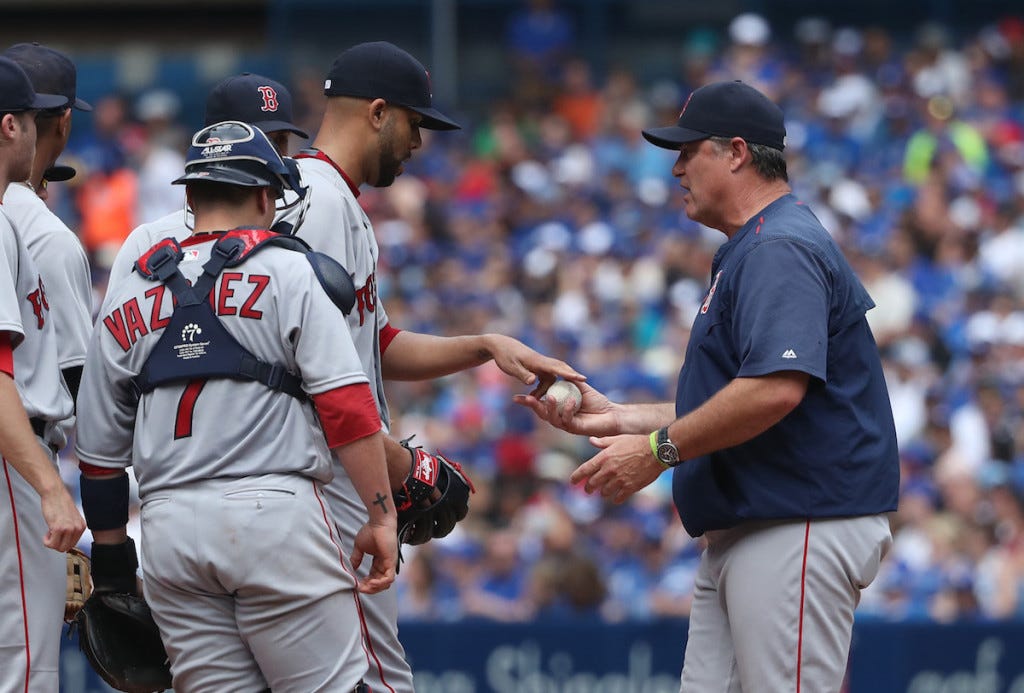 What the fuck, man? It’s gotten to the point where John Farrell has become such a joke that you actually KNOW what he’s going to say after his pitchers get knocked around.

Clay Buchholz, Joe Kelly, David Price, Eduardo Rodriguez, you name it. Whenever one of these Red Sox starters goes out there and gets their teeth kicked in, you can pretty much BANK on Farrell talking about how great their “stuff” was after the game. Like clockwork. And thank GOD, to Price’s credit, he faces the reporters after the game and talks about how much he sucked out there, and how he just didn’t have it. Because right now? It’s bad. Team-wise, I’m talking about. And you know what makes it worse? If you have your starters talking about how great their stuff was after they get their shit rocked.

But don’t worry! They don’t have to talk about how great their stuff was, because you know good ol’ John Farrell will do it for them. Every. Fucking. Time. It’s honestly embarrassing. Like, I can’t imagine that he has such a low level of self awareness, to the point that he has no idea that he’s openly mocked amongst Red Sox fans and media alike for how he talks about how great his pitchers’ stuff is after they get shelled. It’s honestly infuriating as a fan to hear this guy turd-polishing these performances when all Red Sox fans want to hear is honesty and accountability. A fucking win would be nice, but accountability is your best option during a time like this. Tell me what you saw. Because I KNOW you didn’t see Price’s best stuff all year.

This isn’t LA. Baseball fans in Boston pay real close attention to what goes on during these games, and I’m not just talking about reading the box scores after. Red Sox fans have the reputation for being some of the smartest fans in baseball, because they actually are. It’s not like that hokey “Best Fans In Baseball” bullshit in St. Louis. Red Sox fans know their shit, and it’s flat out insulting to the entire fan base to continuously give these PR, damage control-type responses to questions that deserve honest answers.