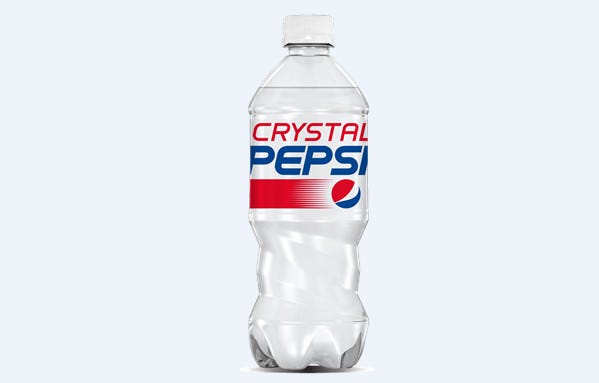 Advertising Age- Aspartame-sweetened Diet Pepsi is not the only soda coming back. PepsiCo is also returning Crystal Pepsi to store shelves nationwide in a retro play. The 1990s-era clear soda will go on sale in 20-ounce bottles for a limited time at major retailers starting July 7 in Canada and Aug. 8 in the U.S., according to PepsiCo. The soda briefly came back last year, but only via an online sweepstakes that lasted less than two days in December. This time, PepsiCo is making a bigger bet that consumers will scoop up the retro soda at stores across the country. Crystal Pepsi will be available for eight weeks.

Now to be honest, I don’t have the same love in my heart for Crystal Pepsi as I do for Ecto Cooler. I remember drinking Crystal Pepsi once and thinking it tasted more like 7-Up than Pepsi. But it (I think?) is supposed to taste identical to regular Pepsi, just without the dark artificial coloring. I’m not sure. I do think that if you change something’s color, it’s going to taste different. Just like yellow American cheese tasting completely different than white American (#TeamYellowForLife, by the way). Same for Pepsi. But I’ll go into a taste test with a clear mind when Crystal Pepsi comes out again, even though last time I tried a retro soda, it ended very poorly.

And while that bottle above is sexy, I want the old school flat bottoms brought back. 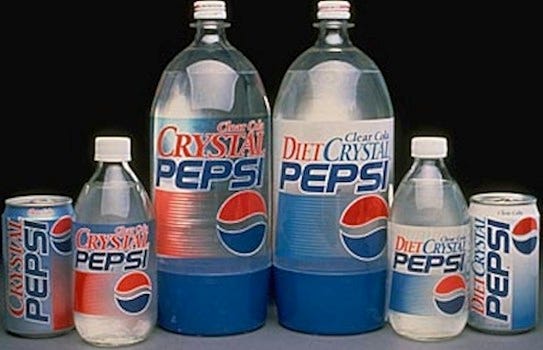 Also, as someone that is a Diet Pepsi drinker (diet soda is the fat man’s compromise), I am very happy that they are bringing back Aspartame-sweetened Diet Pepsi. I would rather take my chances of getting cancer than drink that awful Aspartame-free swill one more time.