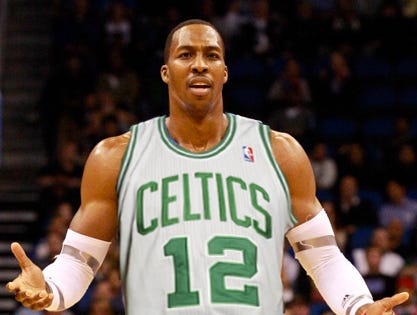 Remember this from May? At the time I said it stunk to the high heavens, that he was for sure opting out, and since his new agent made a career on building and changing public perception, hadn’t worked with an NBA player since Shaq, and they were on the campaign trail to try and show teams he’s “changed” and “ready to work”, safe to say that assumption was correct.

There’s no debating that Howard is a talented player. He may very well be the most talented big man that will end up being available this summer. Dwight is without a doubt a better low post option than any current Celtic big from an individual talent standpoint, so I can see where people are willing to accept this asshole. The Celtics need rebounding and rim protection, and that is what Howard gives you in spades. I get that. But there are also a couple pretty big warts to consider.

I’ve seen today that it should be a no brainer if Howard accepts a one year deal, or a two year deal with a team option in Year 2. Financially, yes that would be a great deal for a player of his talent. Sure you’re taking a giant risk bringing him in, but to only have to worry about one year does make it a little easier to stomach. My thought though, is there is no way Howard is down for that idea. He has too much to risk in what might be his LAST opportunity for a big payday. What if he gets hurt? What if he struggles? It’s one thing for Durant to have this type of deal with OKC, he could be missing a foot and every team in the league would still take him, Howard, I’m not so sure. If this comes down to like a 4 year deal, not one person on the planet should want the Celtics to do this. Take a second and think about it if somehow it’s a one year deal. Howard is 30 years old. He plays next year and sucks, you’re getting rid of him. If he plays well, your’e instead committing big money and big years to a 31 year old player with back issues. Along those same lines, people don’t want to give Horford 5 years because he’s 30, how does that make any sense?

Let’s look at this from the basketball side. You’d be acquiring a guy who does not have an offensive game outside the paint. When you look at his tape in Houston, he and James Harden ran pick and roll all day. You might be saying, well, the Celtics run a shit ton of P&R too! Perfect fit! While that’s true, and as great as Isaiah Thomas is, James Harden is a MUCH better P&R player, so it’s not fair to assume they’d have the same success. Also not to mention, when the Celts ran it, it’s more a pick and pop type play because spacing is so so so so important given the roster we have. Think about the Atlanta series and why the Celtics struggled. Sure some of it has to do with the injuries they had, but when Isaiah doesn’t have space to work, the offense stalls. Isaiah is great at getting into the paint, his hesitation move is Top 5 in the league (not a debate), but this is where he differs from Harden. Harden is big enough to get into the paint and get to the line even with Howard on the floor, I’m not convinced Isaiah has that same success. We hear all the time about the future of the NBA, and how teams are going small and spacing the floor, well, how does this space the floor? 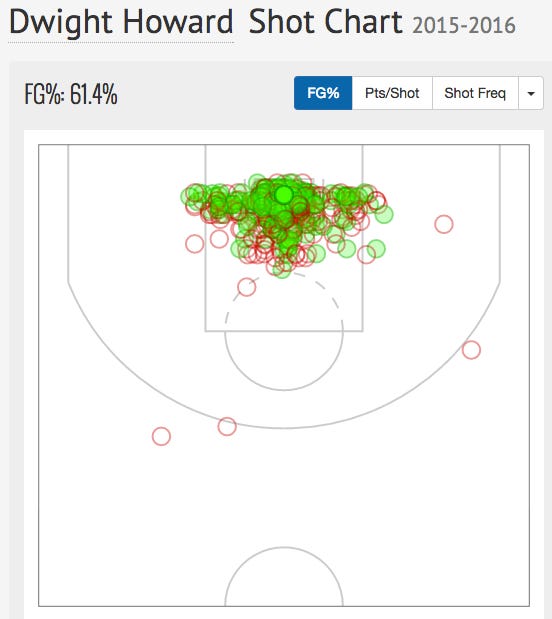 Here’s what we also know. Dwight Howard is only happy if he’s the number 1 option on a winning team and only if he gets his touches. Well, this team doesn’t play inside out. How many times did we see the Celts run a motion offense to begin a possession, run guys like Jae and Avery off screens shit like that. This team isn’t good enough to make sure on every trip we are dumping the ball into the post and just stand around and watch Dwight attempt a baby hook or whatever. He’s not going to get the touches he wants on this team. Guys like Isaiah demand the ball too much, and the way the Celtics move the ball isn’t conducive to the style Howard wants. To me, he doesn’t seem like a fit for Brad’s system, and we all know what happens when Dwight doesn’t feel like he’s an integral part of a system. Now if you want to argue that Brad’s system isn’t all that successful (I mean win a playoff series DERRRRR!) this might not bother you. It bothers me.

Next red flag: When even the Knicks fans don’t want him.

In looking at the FA landscape for Centers, it’s not exactly encouraging. The best one available (Andre Drummond) is restricted and not going anywhere. So we’re left with guys like Byombo/Horford/Whiteside/Howard/Mozgov/Jefferson/Noah/Ezeli/Mahinmi etc. For me, I’d rather Whiteside/Byombo/Horford but I don’t see that happening, so I would be comfortable in taking a chance on some of the other names on this list that probably won’t be as expensive, and doesn’t have the chemistry issues Dwight does. And don’t forget, maybe Jordan Mickey really does provide some rim protection since he showed it in flashes lat year, so maybe you just need to add depth around that until you hit 2017. Guys like Gobert/Ibaka/Bogut/Monroe/Len all could hit the market.

And if you still aren’t convinced that Dwight should be a hard pass, remember…

I just hope Durant hearing this meeting is even taking place doesn’t hurt what beyond slim chances the Celtics already have. So please, I would rather you do absolutely nothing and we struggle all year in the frontcourt than have to deal with this mother fucker ruining everything we’ve been trying to do for years. Dwight Howard IN…Greenie OUT.