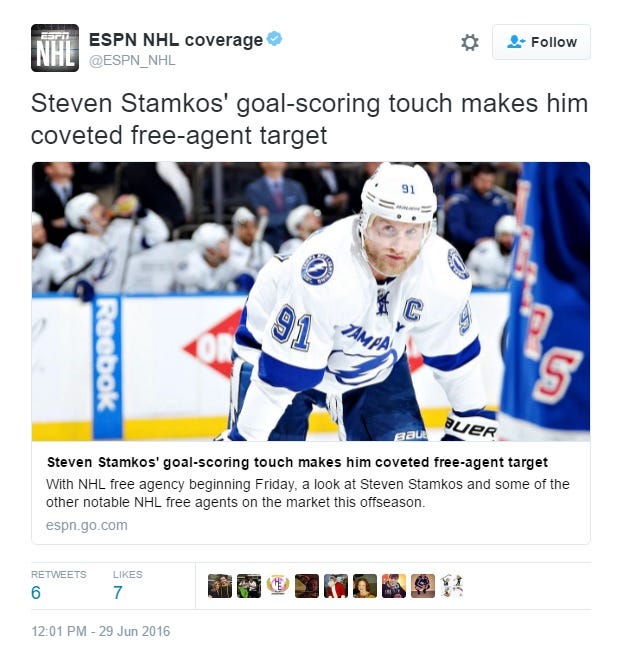 Well I guess I just have to go ahead and tip my cap to ESPN for scooping the entire hockey world on this one. For those of you who are unaware, the NHL Free Agency period opens up on Friday. One player who will hit the market at noon on July 1 is Tampa Bay captain Steven Stamkos. And, according to ESPN, this specific hockey player is going to be highly coveted because of his goal-scoring touch. Now I’d like to see who ESPN’s sources are on this one but I’m pretty sure this is an accurate statement. A quick fact-check will tell you that since coming into the NHL in the 2008-09 season, there’s only one player who has scored more goals than Stamkos’ 312 goals. That player is Alexander Ovechkin with 362. But before you file this away in your “uhhhh ya think?” category, we must ask ourselves does this goal-scoring touch necessarily equate to being a “coveted free-agent target” or not.

After some extensive research, I have found that every team in the past 10 years that has won the Stanley Cup has done so by scoring more goals than their opponent in the game in which they clinched the Cup. There’s a clear correlation between goal-scoring and winning the Stanley Cup that nobody besides ESPN has really picked up on before. So yes, I would say that the fact that Steven Stamkos has averaged 0.55 goals per game in his career would lead to him being a rather highly coveted free-agent target.

Let’s Get Real For A Hot Minute…

Personally I think it’s time to cross Buffalo off the list of potential landing spots for Steven Stamkos on Friday. The reports that came out about Buffalo getting ready to offer $12 million AAV are so fucking preposterous that you have to imagine Stamkos and his agent are just using that number for leverage in talks with Tampa Bay and Toronto. Does Detroit have a legitimate shot of landing Stammer as well? Kind of. It would make sense. It’s a great hockey town and with Datsyuk’s contract out of the way, they have 18-20 million to work with. But if Stamkos goes to Detroit, he has a very finite window to work with when he still has Zetterberg and Franzen and Kronwall to work with. Obviously the two spots that are probably options 1A and 1B right now for Stamkos are Toronto and Tampa. It just comes down to how much money Toronto is willing to throw at him.

It’s hard to think that Stamkos would sign for anything less than $10 million after that’s the deal that Anze Kopitar got earlier this year. While Stamkos and Kopitar are very different players, they bring the same level of impact to the game. Nobody is hoping that Stamkos actually gets $12 million more than Kyle Okposo right now. If Tampa sticks to their number and Stamkos ends up re-signing for $8.5, well then nobody in their right mind is going to give Okposo the $7 million that he’s looking for. Even if everybody knows that signing for $8.5 would be an extreme hometown discount, Stamkos will set this market this summer and Okposo needs that money to start flowing around like it’s Allen Iverson at a strip club.

Free Agent Frenzy live blog will be up and running on Friday. In the meantime, here’s why Steven Stamkos won’t be signing with your favorite team this summer.