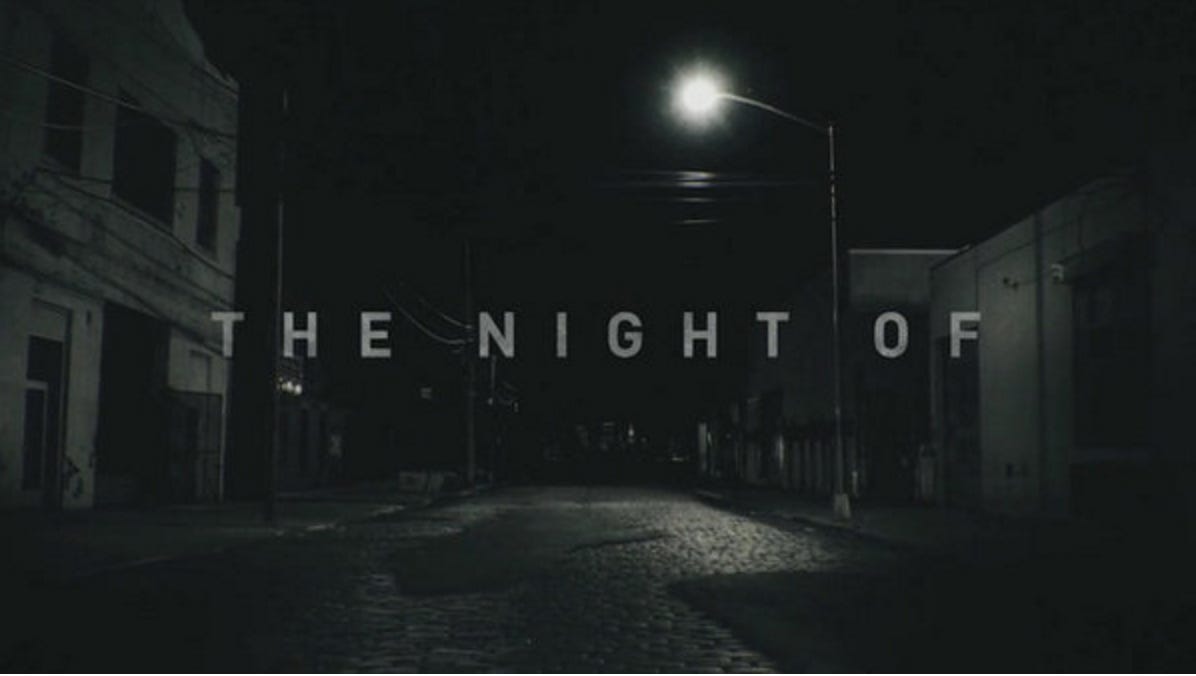 That’s right. I threw it out there. I’m using the Must Watch tag. At least for episode 1. Right now the premiere is available on HBO on demand/HBOgo. The series officially premieres on July 10, but I think they knew they had such a bangarang premiere episode they released it early to drum up the publicity. Get the critics talking and blogs like this spreading the word. It’s a cocky move that you pull only when you know you knocked it out of the park and that’s exactly what The Night Of did.

I’ll explain it briefly doing my best to not spoil it and then we can dive into some more in depth talk for the people who have seen it. It’s the story of a murder case involving a Pakistani-American college kid who needs major legal help. Originally the lawyer was supposed to be James Gandolfini. After he died, Robert Deniro replaced him, and ultimately they landed on John Tuturro to play the role. Tuturro only appears in maybe 10-15 minutes of the 80 minute premiere, because the bulk of episode 1 focuses on the murder. The way the show builds suspense is PERFECTION. It’s some dark, dark, tense shit but I was on the edge of my seat the entire time. Watching all the evidence and the ins and outs of the case come together is awesome. There’s at least 5 or 6 moments where you, as the viewer with all the knowledge, notice something and go “OOOOH. That’s gonna lead to XYZ.” “Oh man now that guy is fucked.” ” oh they screwed up.” A lot of subtle but deliberate pieces of the crime scene and the case that are going to make it a very complicated and in depth series. Anxiety through the fucking roof watching it all unfold.

One last thing I’ll say before we get to real spoilers. Although the this next statement is kind of spoiler-ish so you can stop here if you really want to go in totally blind but I think this is a great way to describe it:

It’s basically Serial the TV show and Nazir is Adnan.

Now for the real spoilers for those of you who have already watched. Come back here July 18th after episode 2 airs and we’ll all be on the same page.

Our boy Nazir is FUCKED. The MOUNTAIN of evidence against him – from eye witnesses to DNA to having the murder weapon on him to lying about everything from the jump – is absolutely staggering. As I said – he’s Adnan. (I suppose that analogy doesnt work if you think Adnan is guilty, but you get the point.) Only difference is even nerdier. A nerdy, quiet family oriented Pakistani kid who ends up in perhaps the WORST “wrong place, wrong time” situation ever. On a night where he was just trying to have some fun for once in his life. The amount of times I said “you’re fucked, Naz” was staggering. From the stab wound after playing with the knife, conveniently putting blood DNA everywhere, to forgetting his car keys and needing to break back in, to the police getting the call to bring him right back to his own murder scene, to the moment when the female cop was patting him down and you knew it was only a matter of time before they found the knife. The whole time I was getting more and more anxious for the kid as the evidence began to pile up.

I’ll admit some of the things seem a little far fetched. How many times has a chick gotten in a cab and fucked her driver? Little outrageous. The knife thing is a perfect conduit to bring the murder weapon, mutual injuries, and blood DNA all over the apartment, so I can over look the fact that it was weird as shit for that girl to want to play stabby games with her one night stand. I mean when Nazir just totally missed and stabbed her I let out a “oh shit!” out of shock, then leading to one of those “ohhhhh no” as she dragged blood everywhere. Definitely some weird shit but I’d imagine most murders are pretty fucking weird. The actual murder itself is going to be an important part of this show. Which I know sounds like “no fucking duh, dude,” but I mean how the show handles it. Will we find out how she was actually murdered? Do we know who did it? Or will the show just focus on Naz being wrongly accused? Is there a chance it was Naz? Was it someone we saw in that first episode? It’s a little silly that there was this GRUESOME murder and nothing happened to Naz and he missed the whole thing. I hope they handle the murder correctly going forward by addressing it.

Speaking of the murder scene – 1) gruesome enough to make you flinch when Naz flicks that light on. Which is good. I think that needed to be part of the story. It’s a truly MONSTROUS murder that heightens everything.

2) I think this will help Naz. If he committed that murder he would be COVERED in blood. And if he was somehow able to wash it off why would he then leave the blood on his hands? Seems like it might be an angle for Tuturro to play.

And to be honest, I don’t think he has many other angles. There’s glimpses of hope – the police breaking chain of command with the evidence, perhaps some of that confession somewhat coerced? (I’m now putting on my Serial esquire hat and playing lawyer again) but other than that it’s an outrageous uphill battle for our boy Naz. Evidence, racism, no alibi. Like I said, Adnan part 2.