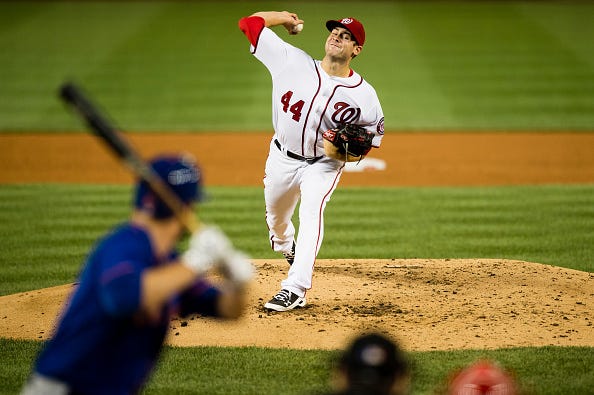 ESPN - A few hours before Lucas Giolito’s major league debut, Dusty Baker said that his prized prospect was on more a “performance count” than a pitch count. The one count he didn’t count on was a pause count.

Whether you were judging by performance or pitches, Giolito was sitting pretty early on. After weather delayed the start of Tuesday’s National League East showdown between the Washington Nationals and New York Mets by 55 minutes, the towering 21-year-old right-hander — who received a standing ovation from fans as he emerged from the dugout shortly before first pitch and ran sprints in the outfield with a rainbow levitating in the distance beyond right field — needed just 45 pitches to get through four scoreless frames.

Relying heavily on a four-seam fastball that topped out at 96 miles an hour, and mixing in a big breaking ball plus a changeup, the 6-foot-6 righty — considered the top pitching prospect in baseball — limited the Mets to a bloop single and two walks over the first four innings. 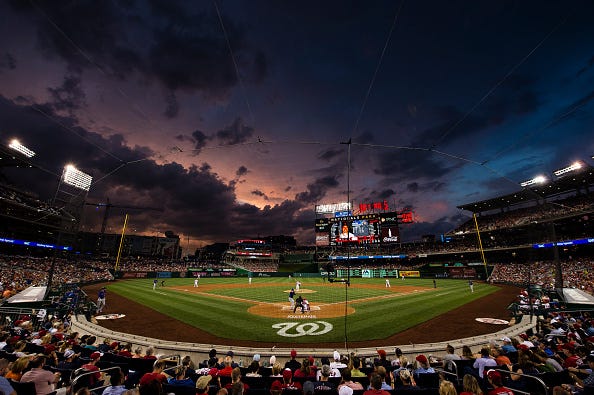 While it wasn’t Strasburg going out there and recording 14 Ks in his major league debut, Lucas Giolito’s performance last night wasn’t half-bad either. The 21 year old who has been hyped as the best pitching prospect in baseball for the last few years had his start delayed by rain, and then shortened by rain, but threw 4 innings of 1 hit ball in between. He only needed 45 pitches to get through those 4 innings, taking the Mets lineup to task and outshining Matt Harvey, who walked 3 in 3.2 and took his 10th loss of the season for the terrible Mets.

After the rain delay the Nats bats came to life, including a 2 run bomb by Bryce Harper and a 2 run double by Wilson Ramos. The Mets never got anything going, and the Nats were able to stretch their NL East lead to 4.5 games over the…Marlins. Yep. The Mets sit in 3rd in the NL East, 5 games back of first and facing Max Scherzer tonight. The sweep should be nice.