The Blaze – British politician Nigel Farage, one of the leading voices behind the Brexit movement, delivered a blistering speech to a hostile European Parliament Tuesday, scolding and mocking MEPs over their “denial” that the European Union is failing.

“When I came here 17 years ago and I said that I wanted to lead a campaign to get Britain to leave the European Union, you all laughed at me,” he said. “Well I have to say, you’re not laughing now, are you?”

Farage told MEPs that the reason they are “so angry” is “perfectly clear.”

“You, as a political project, are in denial,” he said. “You’re in denial that your currency is failing. … Just look at the Mediterranean.”

When members began booing in disagreement, Farage sarcastically added, “No, no, no — as a policy to impose poverty on Greece and the rest of the Mediterranean, you’ve done very well.”

Farage later openly mocked members of European Parliament, telling them they have never held a “proper job,” ran a business or actually created a job.

Cameras captured some of the telling reactions from MEPs during Farage’s unforgiving verbal assault.

Whether you’re pro-Brexit or anti-Brexit or Brexit-apathetic, we can all appreciate what we’re seeing right here on. Pure gloating. Just in your face, smug smile, fuck you I was right, you were wrong, suckkkk myyyyy dickkkkkk.

Honestly I needed to see this guy come out from behind his seat and deliver an old-school DX “Suck it” style right around the room.

I mean there’s really just no better feeling in the world. Saying something, getting mocked for it, then turning out to be right. Some people might take the high road, those people are pussies. If you can’t pick the shit up off the ground and rub everybody’s face in it there’s no point in ever having an opinion in the first place. 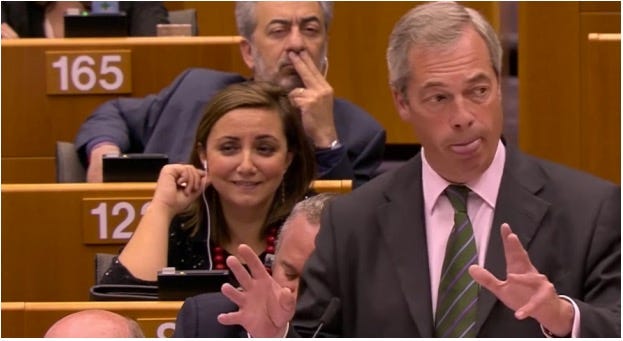