There are only a few sentences in the human language that are impossible to come back from. “Cuz I have a brain”, “Because I said so”, and “No duh” being the first three that jump to mind. All verbal versions of the “slap me high, slap me low, slap me middle, you’re too slow.” Absolutely no way to bounce back from any of them. Just drag your lifeless body to an open plot and bury yourself six feet deep. And just an FYI to any fan that asks why an NBA player is opting out of his contract in the near future. It’s because they all have a brain. The league’s salary cap is skyrocketing, player salaries are going to go through the roof because of it, and it’s impossible to live without a brain.

Chandler Parsons, man. He doesn’t need 140 characters to make a point. Just give him 20 or so and keep the change. Hell it only took him one emoji to set off The Great Emoji War of 2015, which doubled as the greatest day in my life.

The two things you can’t teach NBA players are length and social media savvy. Chandler Parsons just gets it. And whatever team signs him will be the true winner of the 2016 offseason*.

*As well as whoever signs Kevin Durant

Forget it, you cannot trust a guy that never at least snuck a drink of a beer in his life. 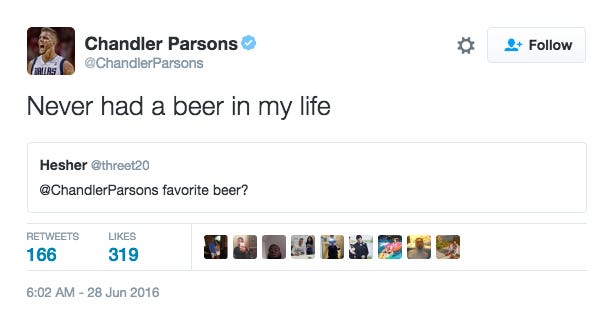