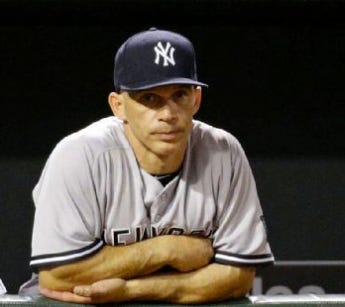 The Yankees, who were three outs away from a victory, instead were dealt a crushing 9-6 loss by the Rangers following an interminable rain delay.

Kirby Yates, in relief of Aroldis Chapman after the game was stopped in the top of the ninth for 3:35 (and resumed at 2:15 in the morning), imploded. He hit three batters and allowed a two-run single to Adrian Beltre as the Rangers stormed back with a four-run ninth following a controversial delay.

“It’s hard for me to understand what happened tonight, how it got to this point,” Joe Girardi said. “But it did and we lost.”

Chapman was looking for his 16th save when he entered Monday’s soggy game in The Bronx.

The closer had already walked Robinson Chirinos to start the ninth and fallen behind Shin-Soo Choo when Girardi approached home plate umpire John Tumpane to complain about the conditions — even though rain had been falling for at least three innings.

Amazingly, the ploy worked — or so it seemed — and the game was halted.

For the last 3 years the Yankees have been able to, for the most part, avoid being a circus but after yesterday it seems like their setting up the tents and and trapeze. The day started off with media coverage of ARod being benched Sunday and again on Monday against righties due to performance issues. None of this should be a big story because with an OPS below .700 you can’t tie up a spot in the lineup that would keep Beltran fresh. Instead the media forced Cashman to talk about the benching being performance related so that they could get a quote from ARod. And what was the magic quote that the media got? It was a media 101 quote to show the guy still wants to play and loves getting paid.

I may be the biggest ARod supporter in the world. I think that he is one of is not the best baseball player in the history of the game. However, facts are facts and the guy stinks because he’s a 40-year-old man and at that age you should stink at baseball. If they put Alex back in the lineup every day he’s just going to continue to not produce so it’s time to cut bait. The longer this goes on, the more the circus grows around the team, which is probably only holding on to Rodriguez to profit off career home run number 700.

Wen you start a day with that kind of mess brewing, the only way you can overshadow it is to go out and win or go out and blow a game in spectacular fashion. Most of us went to bed thinking that we were getting the first option but woke up to find out we were wrong and after a 3 hour and 35 minute delay, The Yankees lost. The weather was shit and the umps should’ve maybe stopped the game earlier but I put this game on Joe Girardi. Why in the world you would decide to begin your campaign to get the tarp on the field after your closer has entered the game is beyond me. The conditions weren’t good, but they had been just as bad for 3 innings so why not start this campaign as soon as we got a lead?

PS: Why would you play this game so late? Not only did you make the players sit around all night but there are hundreds of people who work at the stadium in security and other jobs that had to wait around. I’m sure that the overtime is nice but there we’re only about 100 fans in the stadium to see the end of this game instead of just finishing before one of the other 3 games these teams have this week. Fans and blogs can’t grow the game by sharing videos and now fans can’t even see the games because they’re at 2am. Great job MLB.