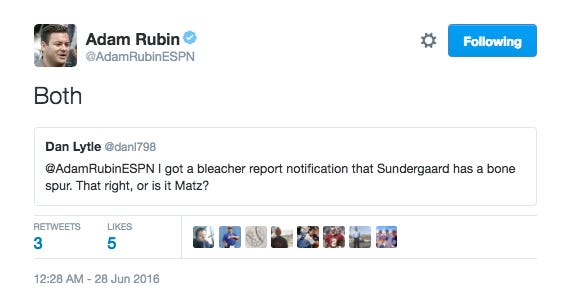 First of all let’s just say fuck bone spurs. Fuck em. Messing with both Matz and Noah and if they need surgery for them we’re pretty much completely fucked. Bone spur surgery isn’t major but if 2 of this staff’s aces miss like 6 weeks we’re cooked. I want to hope for the best, but at the same time need to do whatever is best for these guys for next season. By no means do I want to punt this year but part of me thinks maybe 2017 is the year to really go for it. After the World Series hangover is gone. But like I said let’s all hope for the best here. Hold on to your butts.

Now on to Adam. You remember Adam? He’s the guy who was crying that people on Twitter for using his SPRING TRAINING PHOTOS. He went around reminding people of Internet copyright rules. It was top 3 saddest thing I’ve ever seen on the Internet.

Well now he’s back and the tear ducts are open once again. This time he’s mad that Noah Syndergaard didn’t disclose his bone spur to him. Talking about how Noah looked him dead in the eye and lied to him like they were man and wife or some shit. How their relationship is never going to be the same and Noah should be truthful at all times to him and other reporters and shit. Mannn get lost. Noah Syndergaard doesn’t owe you shit. None of those guys do. They have every right to tell you what they want to tell you. Whatever lies they want. It’s your job to get to the bottom of all that nonsense. If everyone in sports told the truth all the time being a sports reporter would be the easiest job ever. But they don’t. They lie all the time. About their intentions about their reasons about where they were or why they did something. People lie to the press all the goddam time dude! I can’t believe we’re even discussing this like its a thing.

Especially when it comes to injuries. You know why Syndergaard lied to you about his elbow? Because if he told the truth you, me and every other asshole writer in this city starts to churn out a “sky is falling” article. Some dickhead with an axe to grind probably writes an article on how Syndergaard is blaming his injuries for his poor start. The vultures start swarming when you tell the truth. I wouldn’t tell the truth EVER if I was a pro baseball player. Not one single time would I be honest. Deny deny deny. Snake it til you make it. And that goes double for playing in NYC and it goes triple for playing around guys like Adam Rubin.