Johnny Manziel’s father came out last week and said that the best place for his son is in jail. And then this morning we see the following news break:

Today we saw the lightbulb finally come on for Manziel- he gets it. Its actually an extremely mature move on his part to allegedly get on a airplane high, and go slam some tequila. Plus as one of his conditions of bail being that he’s not suppose to be around guns, traveling to Cabo virtually guarentees that he will be arrested and spend time in jail to get the help that he needs as his father suggested. After his lawyer resigned, its possible that Johnny thought that boarding a plane to Mexico smelling like reefer and taking selfies with passengers when your supposed to be in your home state is essentially a kind of an act of civil disobedience.

Its a lazy comparison to say that Cam Newton could learn alot from someone on how to handle adversity, so I’m not going to do that. But it’s obvious that Cam Newton’s father could learn a TON about how to raise your son to be successful from Johnny Manziel’s dad.

Johnny Manziel is finally apparently taking his fathers advice, going to jail and getting back on the right track. Jail is the best way to humble yourself, which Cam Newton obvously needs if he ever wants to be a success. Some of history’s greatest leaders have spent time in jail- MLK, Napoleon, and Jesus- there is virtually no historical downside to going to jail for a while to figure out who you are and what you believe. You know how homeless people will sometimes break a window during winter so they can get off the street and have 3 hot meals a day? If Cam Newtons dad was half the man that Manziel’s father is he would of dropped Cam off in a parking lot with a bindle stick, flat-head screwdriver and a scavenger hunt for after-market radios he needed to collect before sundown. Give him a month in solitary to reevaluate his life that he thought was going so well.

The maturation process for Manziel has allready started. Johnny was spotted getting on the plane to Cabo with Gordon while wearing his teammates jersey instead of his own. You’re more likely to see Newton strolling around with Ginn spilled on the front of his shirt than written on the back. And folks I don’t think there’s any faster way to get the President of Mexico to pay for that damn wall that he owes us than by repeatedly sending Johnny Manziel into his country.

Its called “tough love” and its obvious that Mr. Newton has been coddling Cam, much to his detriment. Both Johnny’s dad and Cam’s dad have a big gap on the fireplace where there sons Lombardi Trophy should be- but only one is actually doing something to try and improve on that. It’s very easy to trick yourself into complacency if you’re the reigning MVP. You can’t hit rock bottom if you’re already pretty good and the faster Cecil Newton realizes that and tells his son to get arrested, the better Cam will be in the long term.

Road Grader of the Week: The Cleveland Poop Eater

This is what sports are all about. Might be the only time in the history of the world that “shit eating grin” has been used literaly. You cant say anything else about Cleveland- this guy cares more about sports then anyone else on the planet. He should honestly get a ring. A Cincinatti fan would need a spoonfull of cinnamon and a bunch of spaghetti to pull this one off.

1. RIP to Buddy Ryan. Buddy was such a football guy that at one point in his life he was literally walking around with both Rex and Rob, football guys in their own rights, simultanously swimming around in his nutsack. He was the biggest football guy on a team that had Mike Ditka, Mike Singleterry, and Ron Rivera. Buddy was the kind of guy who would punch Kevin Gilbride on the sidelines for looking to much like Kenny Powers, and coaching to much like Joffery (Googled “worst game of thrones character” in order to make this piece more relatable to milleneals). He was a innovator in every sense of the word, and this is my favorite Buddy Ryan thing. Via SmartFootball, Buddy invented the coolest formation that has ever existed- the Polish Goal-line defense. 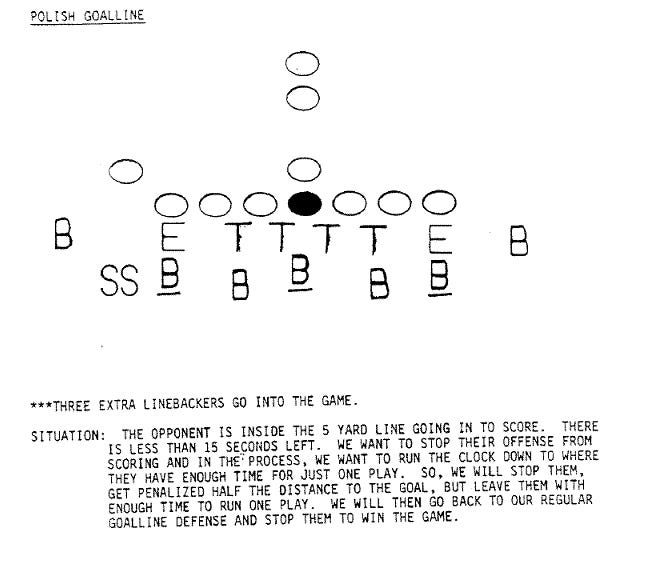 This is basically a endorsement of telling “the Big Lie” on defense. If you are going to cheat, don’t just put twelve players on the field, you go big and put 14. Make the referees think there literally going insane and force them to have the balls to call you out on it. Worse case scenario you stop your opponent on the first play, then after the penalty they get the ball on the 2.5 with time for only one play left. Its brilliant. Makes you think that if Ryan had acutally been in charge of the Polish army he would of allocated more than enough resources to defend against a quick strike offense.

Ryan also had whats known as a “polish punt” formation (I’m not exactly sure why he kept going after the pollacks but it was ok to make fun of them back then) where he would put 14 men on the field during a punt late in a game to make sure the opponet didnt block his punt while daring the refs to call him for too many men on the field. He actually pulled it off verse the Vikings one year because the officials were too chickenshit to call a penalty.

Feel for Rob and Rex, who wanted their dad to see them coach together so badly. But with both the brothers and Buddy watching from the Big Lunch pail in the sky, your going to have 14 guys going all-in on every play.

2. The NFL announced a partnership with cirque du solei for a interactive display in Times Square and its hard to imagine anything that makes more sense. What better way to combat perception of the NFL as being a money-hungry big brash bunch of cold-blooded ostentatious marketing bufoons then a massive display in Times Square? The $30ish dollar area will allow visitors to simulate the experence of watching a real NFL game in person without having to leave the comfort of Midtown Manhattan. Masterstroke by the NFL to improve the in-stadium experience by providing fans with a opportunity to go to the circus instead.

Cant help but think this is all going to end in a lawsuit at the eventual NFL theme-park in Orlando Florida after a child climbs over the fence into the Florida Gator exhibit and encounters Aaron Hernandez.

4. The CEO of the Rio Olympics doesn’t exactly sound confident in their abilty to handle the games. In order to save the olympics from having to deal with poisnous drinking water, the unnessecary slaughter of zoo animals, inadequate health care systems, and gun violence, please sign my petition to move the games to the US instead so we can avoid all these problems. 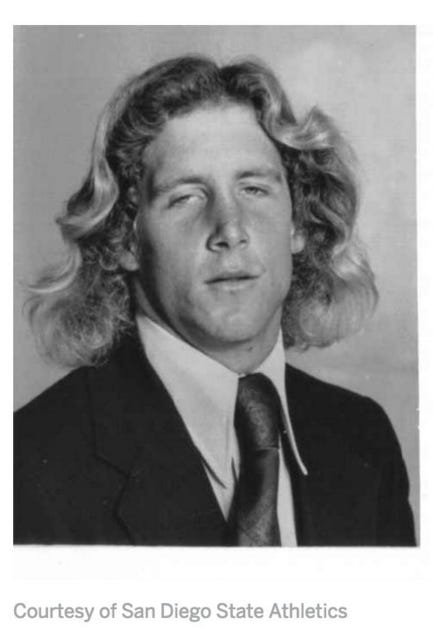 8. Which player does God love the most in the NFL this week? Well if you guessed Mark Herzlich thats astounding because your absolutely right.

I’m actually not sure if you cut Jesus or not. If your just looking at the scouting report, Jesus was injury prone. Had family issues. Mom and Dad not married. In training camp you want a guy who can change the math and it was Muhammad who literaly invented Algebra. Plus Jesus technically takes up three roster spots and you’d rather have a guy like Yaweh who can contribute at multiple positions. Its defeinitely a close call though but when it comes down to it, unfortunately for the Turks going to be the one calling your name this time not the Romans.

Extremely out of character for Dan Snyder to pay a bunch of overpaid washed-up former stars to play at FedEx field just because he was a big fan when they used to be good back in the 80s.

10. Tim Tebow has performed his first miracle if you dont count growing up to be literate in the state of Florida. Everyones favorite God-QB called a hail mary and literally prayed a man back to life on an airplane after he had stopped breathing/having a pulse.

Tebow saved the mans life by kneeling in prayer while the other passengers stood around with there dicks in there hands performing chest compressions for an hour straight until the man regained consciousness. What is right is not always popular. What is popular is not always right.

This weeks 69 is a absolute no-brainer sent to us by long-time MMBM subscriber ClueHeywood. Its a cake they gave to his uncle on his 69th birthday: