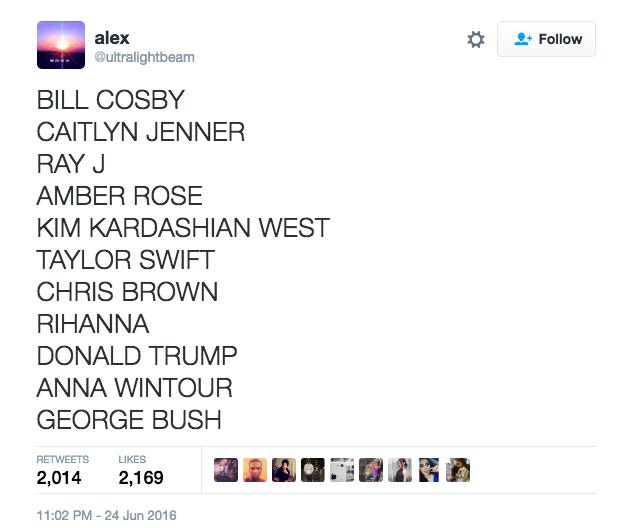 Look, I will admit that I was on the Kanye hate train for a few years. I missed the old Kanye, the straight from the ‘Go Kanye. I’m one of the old people that loved everything from College Dropout to My Beautiful Dark Twisted Fantasy (except 808s, fuck that album). But then Yeezus came out and we were flooded with the “artistic genius” mumbo jumbo from everyone, which actually made it easy to hate Kanye. Because his stans are the worrrrrrrrst. And then once you start hating on his fans, Kanye pulls you in to loathing him by being the same Kanye that you always loved (granted on a higher volume thanks to social media and whatnot).

But between The Life Of Pablo being a solid bounceback album and now this video, I’m happy that Kanye is back in my Good column with this video. Because make no mistake about it, that shot of the “celebs” all in bed together is a modern day Andy Warhol. Taylor Swift’s two bee stings are the Campbell’s Soup can of 2016. Sure it’s ridiculous, kinda gross art (looking at your fake Bill Cosby and Donald Trump), but it’s art nonetheless. Many of the biggest names of 2016 along with the biggest celebs Kanye has been involved with over the years all naked in a bed (mattresses, mattresses, mattressses!) with that post-sex look is great. If the art crowd thinks an all-blue painting is worth millions, then seeing fake Rihanna share a bed with Kim K and Amber Rose is basically the sequel to the Mona Lisa. Fuck Photoshop. Fake celebs is where it’s at now. That picture made me feel something, which is like the definition of art. I’m not sure if what I felt was good or bad, but it was SOMETHING. Add in that this video is exclusively on TIDAL and it doubles as a genius business move because it’s getting me closer to realizing if I want to listen/watch anything new from Kanye, Jay-Z, or Beyonce, I’m going to have to break my number 1 rule of never paying for any music service. Which is wild to think about in 2016.

Oh and if that wasn’t enough, George W. Bush’s people released this statement to TMZ

Anytime you can have Dubya’s people talk about how his fake naked doppelganger in a music video didn’t do a good enough job on his fitness, you have to tip your cap to the creator of said video. Kanye West, Artistic Genius.