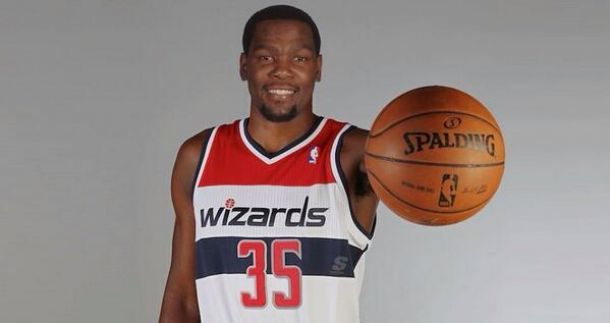 ESPN - The Washington Wizards think it is unlikely that Kevin Durant will sign with them in free agency, a team source told ESPN’s Britt McHenry.

The Wizards recently reached out to Durant’s camp to gauge his interest in joining his hometown team, the source told McHenry, but were told that the superstar forward’s situation is different from LeBron James’ free agency in 2014, when the four-time MVP returned to the Cleveland Cavaliers.

“It’s not like LeBron and Cleveland,” the source told McHenry. Durant, a Washington, D.C., native, already has set up face-to-face meetings with the Thunder, the Golden State Warriors and the San Antonio Spurs, league sources told Stein.

Two years ago, the Wizards were flying high. Back to back Eastern Conference semis appearances, and a John Wall broken hand from an ECF birth. But oh, how things change. A terrible season this year, a firing of a head coach, and an incompetent GM later, the Wizards don’t even appear on KD’s radar. He won’t even entertain them with a meeting. That’s how far out of favor his hometown team has fallen with him. And it’s just so Wizards. A 40 year spell of losing will do that to a team.

It now appears it will take an act of basketball gods coming together at a pow-wow and sending down an angel to work a miracle for Durant to land in Washington. One of those “holy shit, it’s really happening” sports moments that come once in a generation. That’s what we need to happen to land Durant now. For him to have some sort of come to Jesus moment where he puts everything aside and decides he wants to do for DC what LeBron did for Cleveland. The odds are most certainly stacked high and mightily against that happening…but there’s always that tiny small little chance.

If he were to come to Washington, the Wizards would be reborn. A team of John Wall, Bradley Beal, KD, and Marcin Gortat immediately competes for the number 1 seed in the Eastern Conference. But the teams besides OKC that Durant is meeting with- Golden Fucking State and San Antonio, they already have their shit together. They aren’t launching a hail mary to try to get their lord and savior…they are just like “hey if you come here, we win 80 games next season, lmk if you’re into that”.

On one hand, KD can do that whole “legacy” thing people like talking so much about and come to DC and be that savior. Or he can go to an already established basketball powerhouse and win rings. I do think there’s a certain amount of valor in fixing a bad team instead of jumping aboard an already established team, but valor doesn’t win championships.