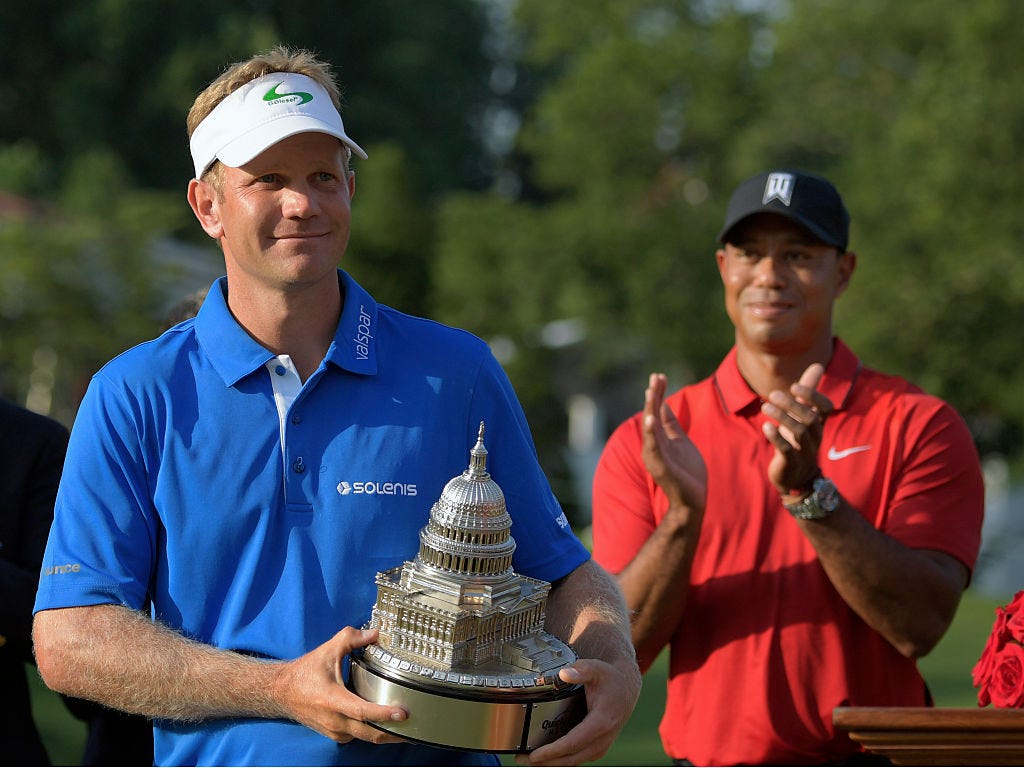 For the second week in a row our champ shot a #nice final round 69. It’s comforting to know everything happens for a reason. While last week the storyline was the major-deprived Dustin Johnson overcoming a bizarrely botched USGA ruling down the stretch, this week’s Quicken Loans National storyline was quite different, quite emotional, and quite layered.

Billy Hurley III is a 34-year-old Navy vet from Virginia who’s had a really shitty year. On July 27th — the Monday before last year’s Quicken Loans National — Hurley discovered that his father had been missing for a week. The next day, he used his PGA Tour press conference to plea for his father’s return. National media picked up the story and a few days later, Hurley’s dad was ID’d in a Texas library. But he never returned home.

Two weeks after that, Billy’s father shot himself in his car next to the Potomac River.

When Hurley wrapped up his first PGA Tour victory yesterday, finishing 17-under and 3 shots ahead of Vijay Singh, he understandably got emotional with Kostis:

"I couldn't think of a better tournament for my first PGA TOUR win." https://t.co/iwIok8WjuP

Yes he walked up 18 with a 3-shot lead, but the back 9 wasn’t void of drama. As things tightened down Congressional’s difficult home stretch, Hurley holed this cheeky little pitch for bird on 15:

His response to the #ShotOfTheDay … "That's probably the most emotion I've ever shown in my life." @QLNational https://t.co/ki1CZGbN1P

And yes, Hurley is a former Navy lieutenant. While Tiger was interviewing himself after winning the 2009 edition of this event…

…Hurley was stationed aboard this puppy in the Persian Gulf: 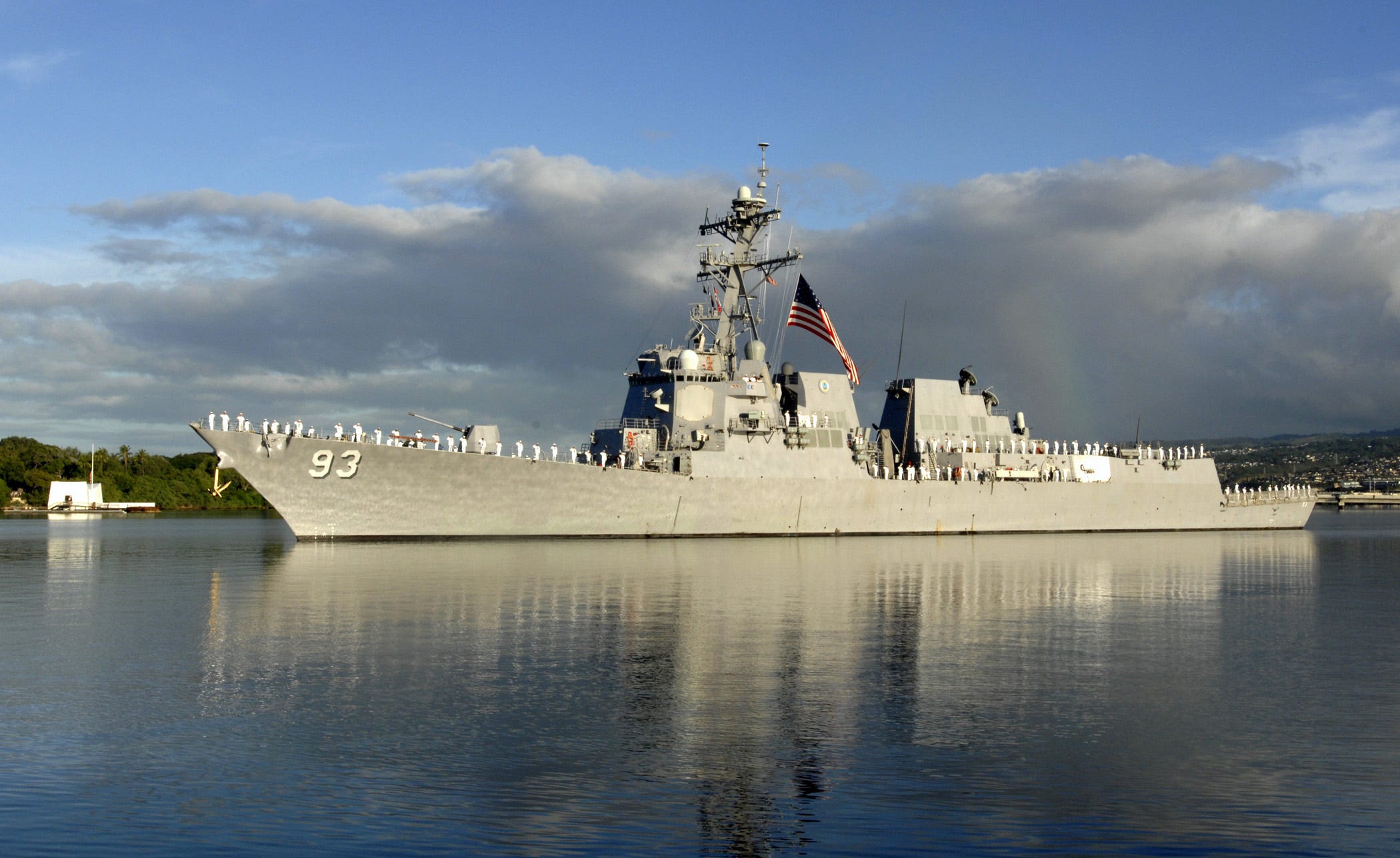 Impossible not to pull for this awesome, heroic, American dude. While many Tour events produce for us an “oh sweet another country club kid raked in another million bucks” feeling, this one damn near brought us to tears. Safe to say we all fist-pumped with Billy on 15… and we haven’t golf-pumped like that since Poulter got injured for the Ryder Cup.

Cue-El host Tiger Woods hopped in the commentary booth on Sunday… rocking his Sunday red that somehow wasn’t ripped to shreds trying to contain these biceps.

Most notably, Tiger said he wasn’t sure if he’d play in 2016. Truthfully, I’d be shocked if he played this year, or at least anytime before the Ryder Cup concludes on October 2nd.

Here are the tourneys he’s eligible to play: 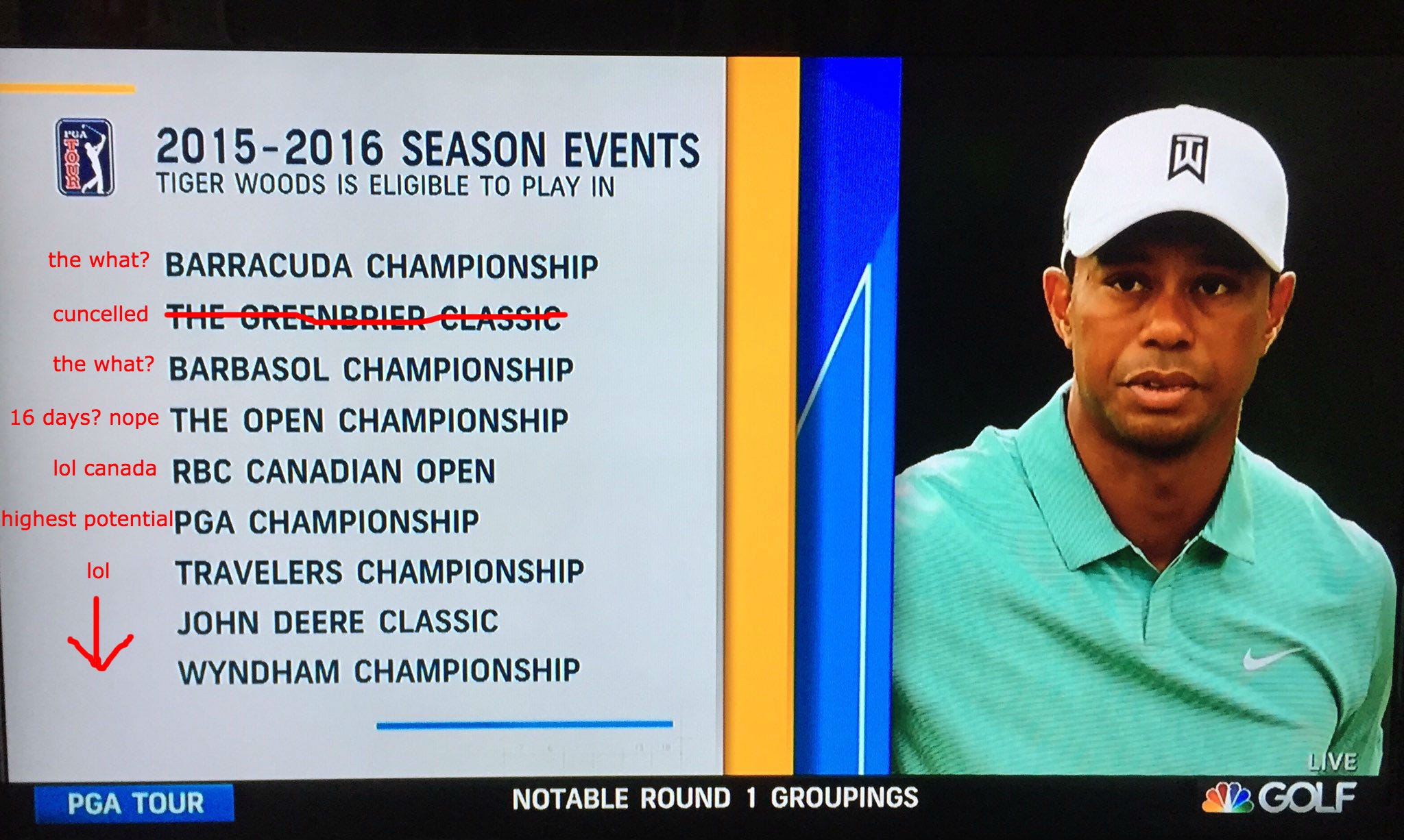 Tiger, take your time. Go play soccer with the kids, focus on your vice captaincy for the Ryder Cup, and get as healthy as that band-aid of a body of yours can get. Then comeback next year and give us one last run at the crown. 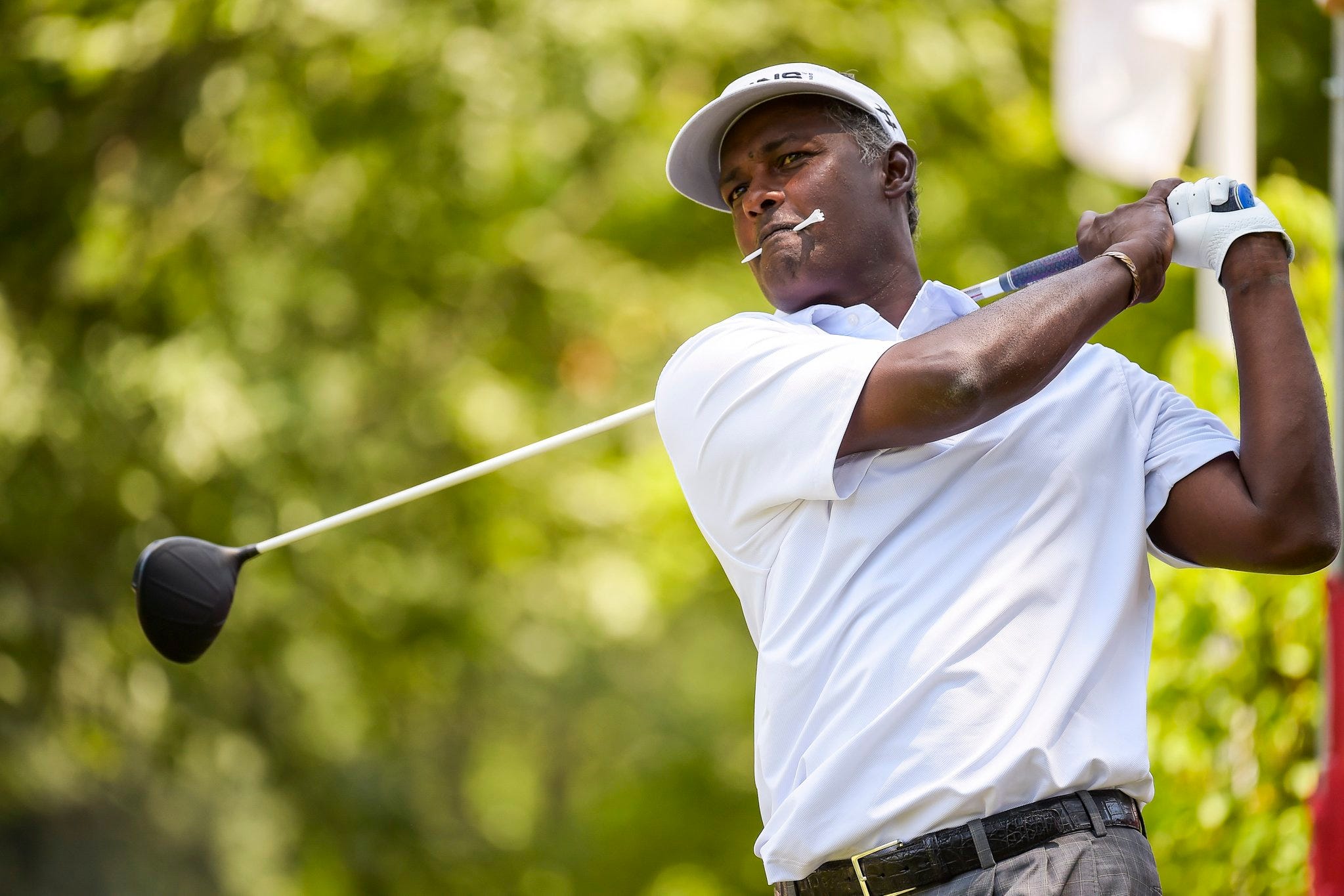 Bit of a blast from the past outside DC this weekend. The 53-year-old Big Fijian finished 2nd and 46-year-old Ernie Els delivered a solid 5th-place showing.

The much-hyped SB2K16 grouping had a decent but underwhelming week. Although Justin Thomas opened with a fun 69-69, he failed to break 70 over the weekend and finished T12. Smylie Kaufman posted a stellar final round 67 to crack the top-10. And Richard Fowler, the no. 7-ranked player on the planet, closed with a 3-over 74 to finish T44.

Rickie Fowler's walk to the #QLNational tee got a little awkward this morning – https://t.co/Kgr9pqLahH pic.twitter.com/4YpRqZ6rS2

Let’s start with the good. Of the 151 players that “finished” the tournament, my DFL pick Carlos Ortiz tied for 4th to last at 6-over par. Sadly, he birdied 2 of his final 6 holes on Friday otherwise I could have nailed my first DFL prediction in just the second week on the chase. Regardless, a good run at it from the 25-year-old Mexican.

I picked Australian Marc Leishman to snag the dubya this week. He opened with a solid 67, but failed to break 70 the rest of the way and finished T39, 15 shots behind Billy Hurley.

The Greenbrier Classic, the Tour’s July 7-10th stop, has been cancelled due to Virginia’s devastating flooding. Here’s some Bubba footage of the course:

Henrik Stenson won for the first time in nearly 3 years this weekend. He took home the Euro Tour’s BMW International Open in Germany with a dash 17 finish. Hard to fathom it’s been that long when he’s sporting this kinda action:

This week the boys head to Akron, Ohio for the WGC-Bridgestone at Firestone CC. Tiger has owned this track, winning 8 times from 1999-2013. But with Eldrick now dead and resigned to going full Sunday red for quick spots in the booth with Faldo and Maltbie, Firestone is wide open.

The Irish are on a bit of a Bridgestone run. Rory won here during his dominant summer of 2014 and Oakmont collapser Shane Lowry is the venue’s defending champ, earning it after firing this one through the trees on the 72nd:

And remember, last year, Lowry got this stroke of good luck on 18 at Firestone: https://t.co/3L9sNnEsYY. Dude has moxie. #USOpen #golf

I was a little late off the block with the Quicken Loans preview last week. My bad. Keep the retinas peeled for the Firestone preview midday Wednesday.