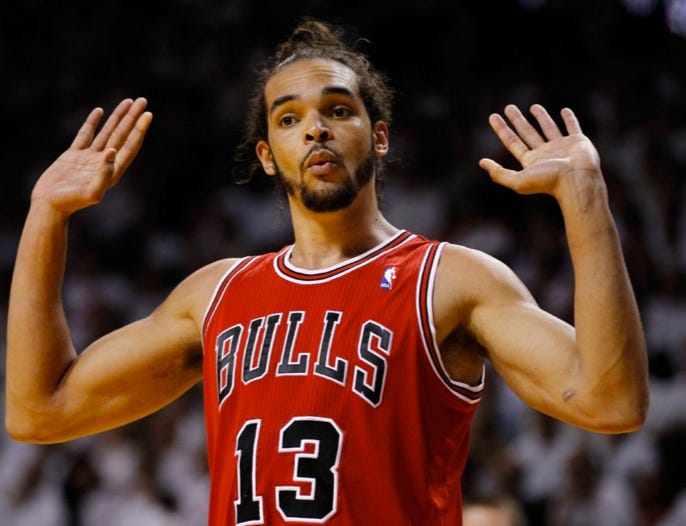 Sporting News - The summer of crazy spending in the NBA is only days away and it is likely to start in Washington. But we’re not talking about the Wizards’ pursuit of Kevin Durant, which most observers regard as slightly delusional.

According to sources, the Wiz are locked in on making a major offer to Joakim Noah. The Wizards are said to be willing to offer Noah, coming off shoulder surgery that KO’d him in January, a full maximum contract. His deal would start at $28 million and reach around $120 million over four seasons.

Yeah, it’ll be that kind of crazy money for the soon-to-be former Chicago Bull.

The Wizards are prepared to go all out for the 2014 NBA Defensive Player of the Year because they have glaring holes up front and already are anticipating having to win an intense bidding war. Three other teams — the Knicks, Timberwolves and Bucks — are also planning to make substantial offers to Noah, who played only 29 games last season before suffering a shoulder injury. If the Bulls come calling, he probably won’t even take their call. He has no intentions of re-signing in Chicago and is ready to move on, according to a source.

What a ridiculous rumor going around? We’re all laughing, because nobody would possibly ever give Noah a max deal that reaches 120 million over 4 seasons….oh wait, the Wizards GM is Ernie Grunfeld. God fucking dammit. This is probably going to happen, isn’t it? Giving Noah a max deal is craziness. Joakim Noah wouldn’t even give Joakim Noah a max deal. Not only is he past his prime, he was one of the more overrated players in his prime. Not only that, but he’s injury prone now. If there is one thing the Wizards absolutely don’t need, it’s a big guy who misses too many games who can’t score. We already have one of those, his name is Nene, and we’re stuck with him, thankyouverymuch.

Hopefully Joakim Noah does the honorable thing and goes to the Knicks. Derek Rose, Noah, and Phil Jackson just running some weird triangle offense. We need to see this so bad.

If Grunfeld does lure Noah to DC with a max deal, god help us all.