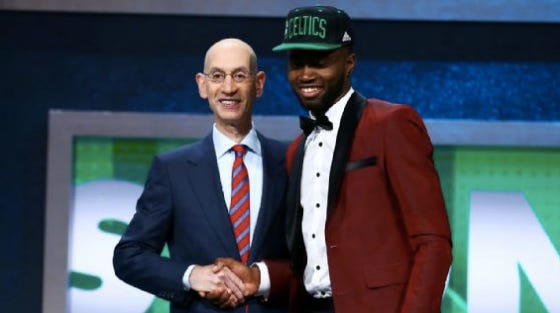 1092 days. One thousand ninety two days. That was the buildup to the 2016 NBA Draft. June 28, 2013 was the day the Celtics officially began their rebuild. It’s when they cashed in for an unheard of haul. Unprotected first round assets. Since that day the dream of possibilities was intoxicating. They now had the assets to pull off another 2007 trade we thought. Last night’s draft was the cashing of our first wave of chips, and after another round of talking about fireworks, and months and months spent yapping about Kevin Durant, Jimmy Butler, Paul George, DeMarcus Cousins, Jahlil Okafor, Nerlens Noel, drafting versus trading, all that bullshit, here we are. We did get a trade in the second round, so you can’t say Trader Danny didn’t make any. Now, I’m sure as you read this there’s a chance you’re pretty angry. Or at least annoyed. I’m with you. Last night could be called a disappointment, that wouldn’t be wrong, but I call it reality. The second you got the third pick, this was your reality. The easy thing to do is complain Ainge choked and couldn’t pull off a deal for Butler that was on the table. Maybe that’s true. But none of us know what the official ask was from Chicago. Who knows how ridiculous it was? What put fuel to the fire were the rumors about the Minnesota deal, something that appeared to be a deal the Celts could have, and should have made. But remember, that deal didn’t happen either. That’s the reality of this pick. Chances were, they were going to have to keep it.

Call it PR, you’re probably right, but right away Wyc came out and was adamant that what they were offered was trash. He talks about not getting ripped off, and shit I have to agree. It makes you wonder, who’s lying, the Celts or Woj? I will say this, his performance as pretty rehearsed. I listened to him here, on CSN, and on the Sports Hub, and he gives the exact same story and reactions every time. Maybe that means it’s true, maybe he knows how this works.

So, where we stand today is in a position of uncertainty. That’s frustrating because it’s not a position any of us thought we would be in. In a draft with 8 picks, it wasn’t even a thought that they would be making and keeping all of their first round picks. That alone was surprising, without even talking about the players they took. Remember, the overall consensus was that the Celtics needed to address shooting, rebounding, and big man depth. Well, how did they do..

If you paid attention, you were doing the smart thing and mentally preparing yourself for this. I had hoped for Murray, but once Brown was announced I felt nothing. Not shock, not anger, mostly acceptance. For every reason someone can say Brown is the wrong pick, someone else can point out an area that leads you to believe he can be successful. When picking this high, deep down I want one thing. I want a player that can play right away. The quality of that play will probably suck, but he is a rookie. Can he guard his position well enough to warrant the minutes, and if so, with this roster around him, how bad can Brown be? Young, strong, athletic, who can run the floor and finish in transition? Last time I checked all the Celtics do is play in transition. Make no mistake it’s not all positive, the last thing you want to hear about your top pick is that he’s uncoachable, but this isn’t Sacramento. He’s coming to a good team with a solid foundation. Also, this pick saved us the headache of what the fuck we would do if we took another guard, so I may be taking that into consideration when I think about how I feel about this pick.

Here’s where things started to take a wacky turn. Who on God’s green earth is Guerschon Yabusele. I’m not going to sit here and say the pick sucks because I’ve never heard of the player. He very well may be a great pick. At 6’8 260 he’s certainly not going to need to add weight. Twitter says he’s the next Draymond, and if that’s true, it’s an absolute home run pick. My problem isn’t that they took this kid out of France, it’s simply when they took him. It didn’t just surprise me, it surprised him! 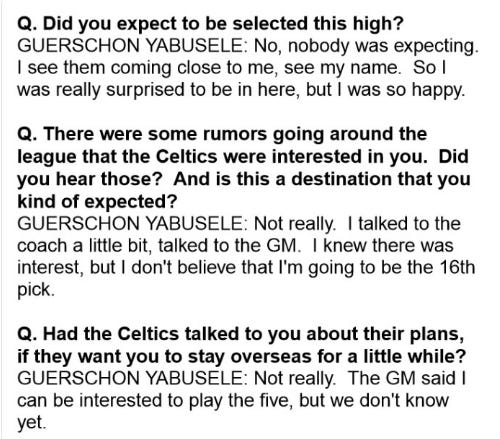 People who are a hell of a lot more in the know than me say this guy lived in the 30 range. Is it really outrageous to say maybe this is a stretch? Not to mention, he’s probably a draft and stash player. That’s the other half of the pill that’s tough to swallow. Out of your first two picks, you didn’t address shooting, and you took a player you probably wont use next year. For those who wanted Danny all along to keep the picks and build through the draft, I simply ask if this is what you had in mind. Even if you wanted to reach for Yabusele, chances are you could still reach and take him at 23.

By the time this pick rolled around, I think we all knew they weren’t going to be trading any of these picks. In my draft preview I talked about using this pick on a project. Just say fuck it and take a risk on somebody. When Ante Zizic was announced as the pick, on the surface it’s not terrible. What made it such a punch to the gut was it was another player, back to back, that was a draft and stash player. So, basically, two out of your three first round picks not only didn’t bring you NBA talent in a trade, they didn’t help you move up in the draft to take a high pick, no, they gave you two guys that won’t even be on your team next year. I don’t understand how that’s an ideal situation. Again, no problem with the player, if he pans out is anybody’s guess, but right after you take a draft and stash player, to take another one is tough to stomach.

There’s Trader Danny! Another first round pick that will probably end up like 19 that they won’t be able to move! We would come to learn that they had their next draft pick ranked in this range, so it worked out to get a better pick and the player you were going to take anyway. No complaints, in fact, good deal.

Love love love love love. This was a player that for most of the year had first round talent. Some say he is one of the better point guards in the entire draft. To get a player like this at 45 is probably best case scenario. Sure, it’s still a definite long shot that he turns into anything, but when you want to talk about value, this is tremendous value. In reality he probably spends the entire year in Maine, and that’s fine. Down the road, if there’s ever a time where the Celts deal some of the guards on their roster, if I need to develop someone to fill Terry Rozier’s spot, why can’t it be Jackson.

If Danny Ainge wanted to give me that little taste to bring me back in, it’s working. First team all Big East (RIP), Big East Most Improved Player, and Kris Dunn’s running mate, I’m not going to put my nose up at 21/7. Another future Maine starter, a young power forward who can stretch the floor, not to mention coming from Providence, you can’t help but think maybe there is something there. Don’t fall too much in love though, remember that whole math thing.

All in all, last night certainly wasn’t what we all expected. In fact, I don’t think it’s even close. It’s impossible to know, and stupid to try and say how they did in terms of the players they took, because nobody knows. Here’s what I do know. I don’t see any of their areas of need addressed. Where’s the shooter? The rebounding that you did take, won’t be on your team, and aside from Brown, the players that are going to be in the US are going to be in Maine. So out of 8 total picks you got 1 NBA player who’s biggest weakness is your biggest need, a mid round first in 2 years, and two D-League players. I can’t sit here and tell you Danny hit a home run in this draft. I’m all for trusting Ainge and obviously he knows a shit ton more than any of us, but I do think it’s valid to look at this situation and honestly ask how this makes us better. This was his first chance to show how he was going to validate trading Paul fucking Pierce, and I think it’s justifiable to say, what. the. fuck.

Big picture thinking, a 48 win playoff team just added a lottery talent and has room for two max players. I love that sentence. Room for two max players. So, I’m supposed to be encouraged that things are in a good place because for the first time in the history of this franchise they are finally going to bring in two major talents in free agency. People have looked at this list right? Who exactly are you going to give max money to on this list that is going to make that difference? And don’t say Kevin Durant. If you want to tell me the 2017 draft and 2017 FA class is where the Celts will make major moves, I’ll tell you stop telling me it’s about the next year. I’m all for patience, but as we JUST saw, these picks lose value by the day, and right now after going through THAT draft, it’s only human to be a little nervous moving forward. 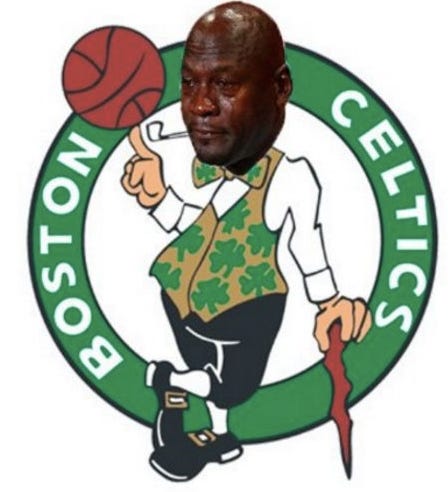