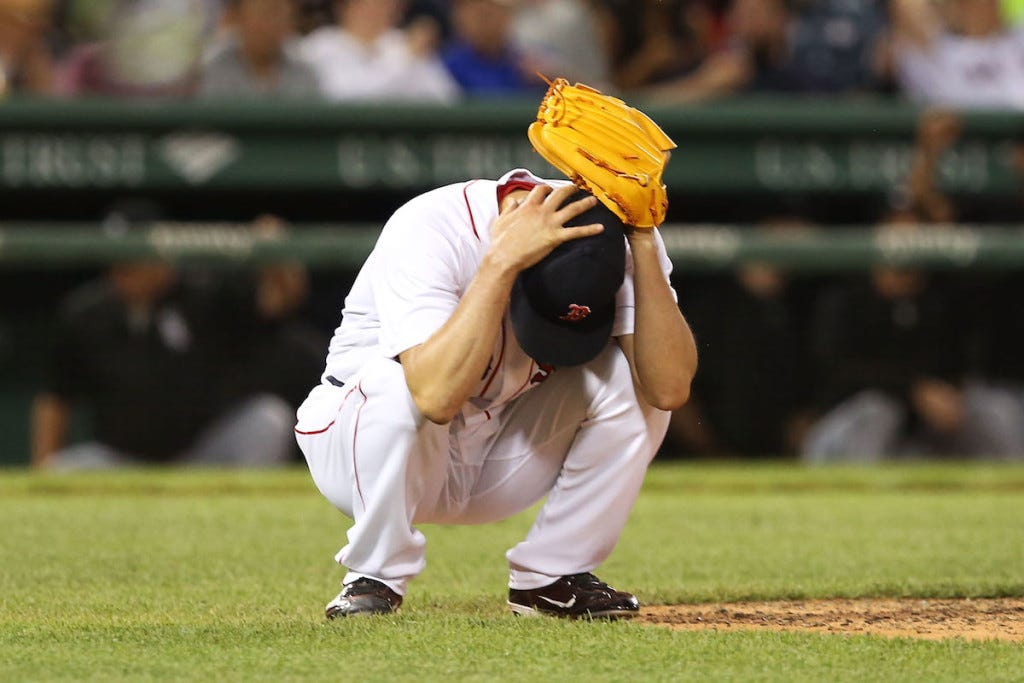 The Red Sox just can’t seem to get their shit together from a collective standpoint.

If you get a good start, the offense lets you down. If you get good offense, the starter lets you down. And on Wednesday night, if you get a good start, and good offense, the bullpen lets you down. Over Boston’s 19-game skid in the month of June in which they’re 7-12, they’ve gone from 3 games up in the division to now 2 games back. Over that same span, they’re still hitting .274 as a team, which is the seventh best team batting average in the MLB. But you’d never know that, based on the fact that they’re averaging 4.7 runs per game. We all know the stat there — the Red Sox have one win since April 29 when they’ve scored less than five runs. I would assume that means that it’s bad news when they average less than five runs per game over the course of a month.

Can’t really blame the pitching too much recently, either, as Red Sox starters have turned in a quality start in 10 of their last 14 games with a 3.67 ERA. Every night that the Red Sox lose, you look at the box score and the Red Sox are right around even with the other team in hits, but they leave a ton of runners on base and have struggled mightily with runners in scoring position. The starting pitching hasn’t been a problem this month. Getting hits hasn’t been a problem this month. The problem has been getting hits when the team actually needs them. The Red Sox have failed big time during this downturn to deliver in big spots.

At least, that’s been the story for most of the month. Last night, that wasn’t the biggest culprit. The Red Sox took a 6-4 lead into the top of the eighth inning and sent Koji Uehara to the mound. Adam Eaton leads off the inning with a single, Koji gets Jose Abreu to strike out on four pitches, and then Melky Cabrera laced a two-run, game-tying home run into the bullpen on a first-pitch splitter that didn’t split and stayed right out over the heart of the plate. Two batters later, Brett Lawrie got the same pitch, the same velocity in the same exact location and belted it over the Green Monster to give the White Sox the lead. Of course, the Red Sox didn’t come back. They’re 1-27 this year when trailing after 8 innings.

On a somewhat brighter note, Eduardo Rodriguez looked pretty good. The box score will show you that he gave up four runs, but only three of them were earned, and two of those came on a mistake pitch to the guy who’s leading the league in homers. That’s gonna happen sometimes. The important things to take out of this start is that Rodriguez averaged his highest average fastball velocity of the season by a pretty sizable margin. The left-hander’s fastball averaged 95.10 MPH on the night, when his previous best mark this year was 94.68 MPH against the Twins on June 11. He also topped out at 96.81 MPH, which was his fastest pitch since his final start of 2015.

Rodriguez only allowed four hits in his six innings of work, and three of those hits came on pitches that were down and in to right-handed batters. He ended up striking out seven batters, which was his highest total since he struck out nine in Baltimore on September 14 last year.