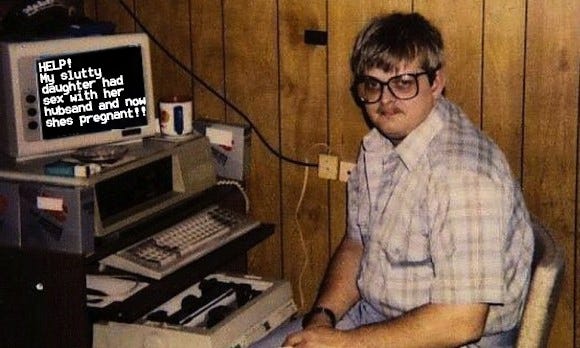 So last time we met here was the week of the whole Emily Austen debacle where the PC police dragged her across the coals just because she made racialy disparaging comments against Mexicans, Asians, and Jews. Fortunately for her, my ombudsman column really put the fire out on that one before things got out of hand. Took the last week off as I was moving up to NYC since I had to choose between affording toilet paper and internet for the week and we stopped in Cincy for some Skyline on the drive up- so obvously had to go with wet wipes over wifi. But now we’re back, the mailpail has piled up so its time to take some questions:

Hey PFT got a question, and for the female readers sup?

Once everyone makes the big move to the New York office are things going to be a little bit too cozy? figure you might want to lead by example and teach them about true workplace GRIT. Here is some workplace ideas to really set the tone.
1. Instead of an office chair sit on a bench with 135 on the bar at all times. (anything more or less is showboating, or humiliating)
2 Once a day play Mike Alstott highlights to show the advantage of the deceptively fast north south running style.
3 When everyone brings in some Starbucks to drink make sure to show them that you only drink a pot of coffee (black) or lemon lime Gatorade since you never know when someone might challenge you in a 40.
4 Set your desk 1 inch below everyone else in the office. Pad Level is everything.
Hope this helps.

Treadmill desks are all the rage these days but isnt running just basically practicing not standing your ground? I want to install the worlds first squat-rack desk so I can rip out my quads when I’m writing takes. They say Barstool appeals to lowest common denominator but if your not going ass-to-grass your not going low enough In My Opinion.
The New York office is going to be interesting because its taking a bunch of guys who worked from home for the last years and transitoning them back into a controlled environment. Like how they brought Harambe in from the jungle into captivity-a wild animal is always going to have those 20,000 years of the earths existance embedded in his brain telling him to kill or be killed. In other words if I see a child approach Big Cat I’m calling in the Swat team.

Hey, I was recently informed by my daughter and her husband that I’m going to be a  grandfather.  They then asked me what I wanted to be called by my first grandchild.  In my opinion the choice is obvious:  tombrady.  My daughter is pretty cool with it.  My wife on the other hand thinks I’m pathetic.  I really respect your opinion.  Any interest in weighing in.
Thanks, Kevin.

First of all congrats on getting laid back in the 80s. What a exhiliarating time to be having unprotected sex. The 60’s get alot of play for being the best sex decade of all time but my Mt Rushmore of 10-year periods to have sex in has the 80’s at the top. You were constatnly weighing the risks of contracting AIDS with the fact that nuclear annhilation could occurr at any given moment so you might as well die with a smile on your face and your genitals slamming on a nice mound.
Secondly my condolences for finding out that your daughter had sex. Feel like thats allways a bittersweet time of life for a parent. On one hand your going to be a grandparent, but on the other you just know that your little princess was getting freaky like nobody’s business on the down low. Always seemed to be hypocritical of Dads to threaten to kill me for trying to spy through their daughters window when I was in high school but then 20 years later you pass out cigars just because some guy with a ring on his finger had her spread eagle on a beach blanket.
Seems to me that the only time in life where its socially accepetable to give yourself a nickname is when you become a grandparent so you gotta take advantage of it. If my son ever gets laid I’m going to make my grandson/grandaughter call me “coach” so that he grows up respecting me as a authority figure, plus no one else is going to call me that after I inevitably get banned from most youth leagues for banning my kids from bringing water bottles. Either that or “Obama” because when I retire I’m going to be getting paid by the goverment and not accomplishing anything folks.

I was confused earlier this week when I saw ads for the Bill Simmons HBO show on barstool. I figured this was a dangerous game of chicken between two heavy weights.

Now after hearing (was never going to watch it) that Ben affleck went all “Artie Lange on the Joe Buck HBO show” on the bill Simmons HBO show, and seeing the new promos for pmt, it’s clear that barstool won the game.

I am still confused though. Was this a stroke of strategic genius by barstool? Or is it just a case of reckless abandon on daves ‘s part?
Also, does this mean Ben affleck will stab himself next year?

Depending on who you ask, Dave has either been getting cucked by Simmons, or Simmons has been getting cucked by Dave. But its tough to say whose sleeping with whose wife when both parties have spent the last 10 years getting cucked by Giselle. When it comes down to it, if you don’t know whether something is going to be a good idea or a bad idea, do the one that puts money in your wallet and then if its terrible at least your rich and thats what Dave went with. Also, thank you for not using adblocker- you know who else tried to control which businesses you should and should not shop at?