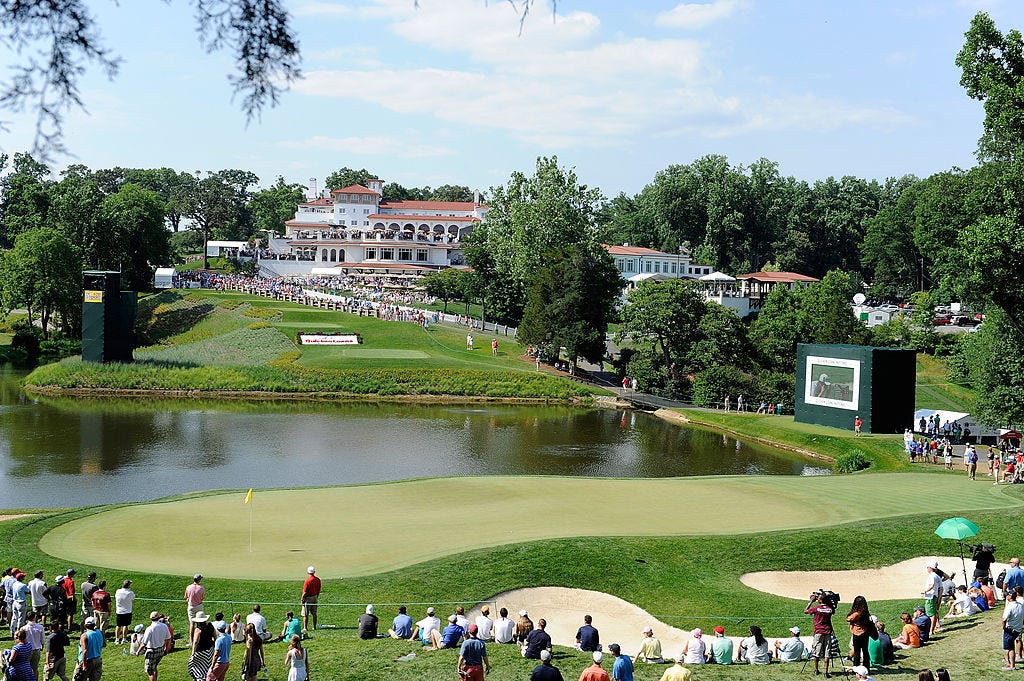 The US Open? Is that even sponsored? What kinda poor people shit is a golf tourney without a sponsor as its name?

But… the Quicken Loans National? Now we’re talking tradition, prestige, and every time you discuss it you’re reminding yourself that anytime you need a quick mortgage, there’s a Detroit-based loan firm made especially for you!

One of the best finishing holes in #golf!! The 18th at Congressional Country Club. #QuickenLoansNational pic.twitter.com/jDqqiLCpUD

The Quicken Loans National commenced in 2007 to replace The International, a modified stableford that the Tour discontinued in February of the same year. The Quicken Loans serves to benefit the Tiger Woods Foundation and boasts Tiger himself as its host. He usually plays and uses his clout to recruit a strong field.

However, with the Olympics jumbling up the schedule this year, The Quicken Loans (Cue-El, as I’ll refer to it) has been moved up a week and will not feature Eldrick doing the golf. It will, however, feature Congressional Country Club, a Bethesda, Maryland track that’s hosted 4 major championships.

Congressional is a tough, major championship course. It hosted the rain-soaked 2011 US Open — an 8-stroke walloping by Rory — and previously welcomed the ’97 and ’64 Opens and the ’76 PGA. 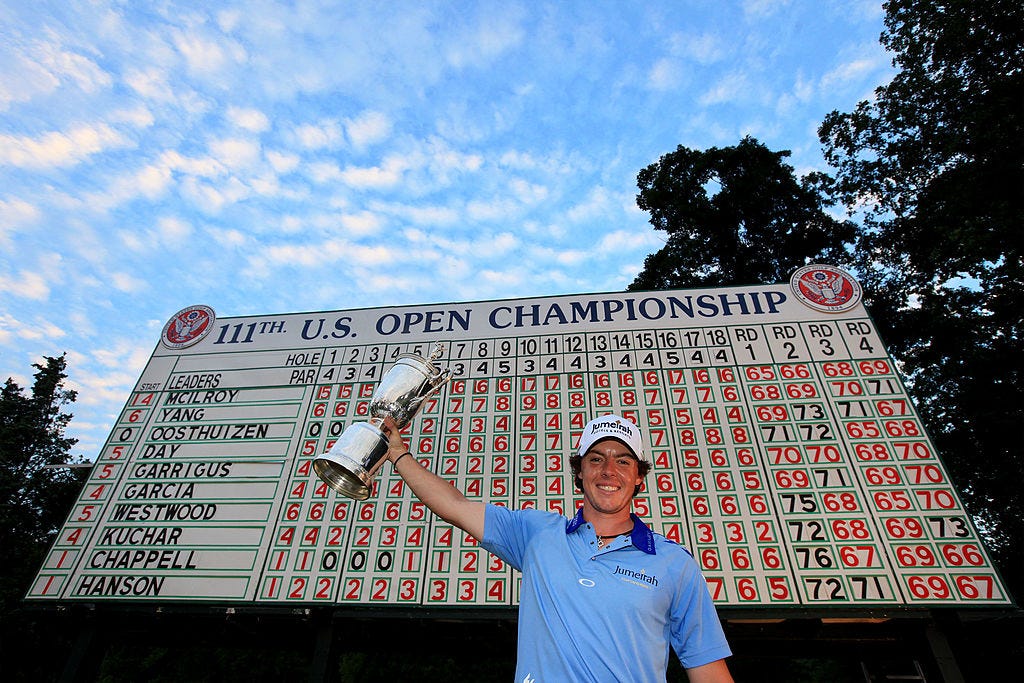 10 — The 10th is a majestic 218-yard par three over water. It lays right below Congressional’s sprawling clubhouse and acts as a gorgeous natural theatre and a daunting test. It’s played over par at every event since Congressional’s 2007 resurgence on Tour. 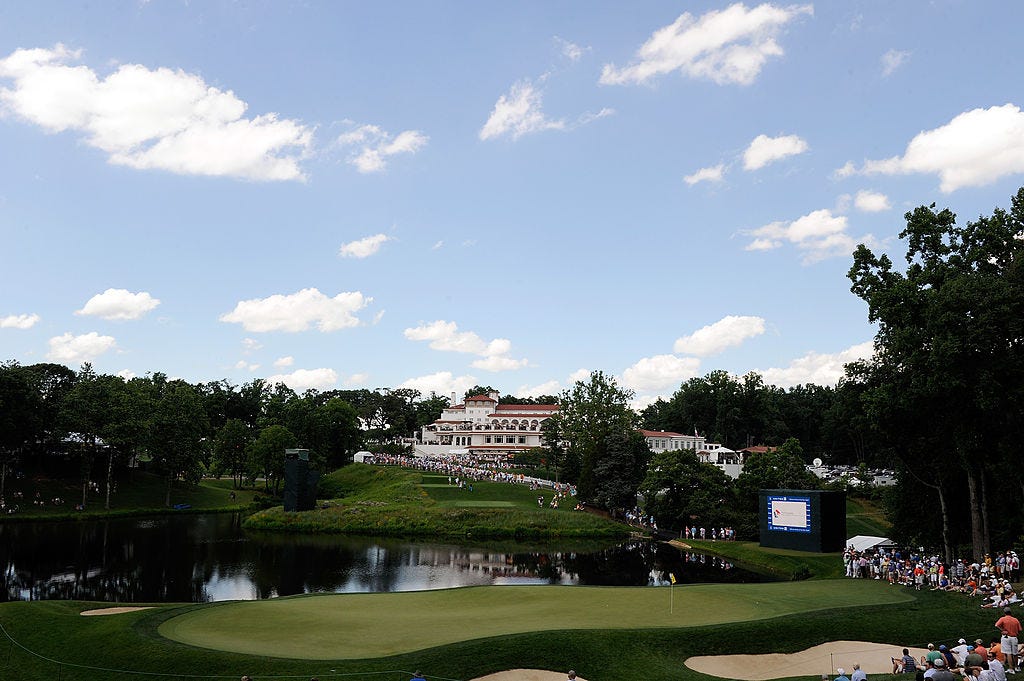 11 — The 11th is a 489-yard par four. It plays slightly downhill off the tee with a creek running down the right side of a severely left-to-right sloping fairway. 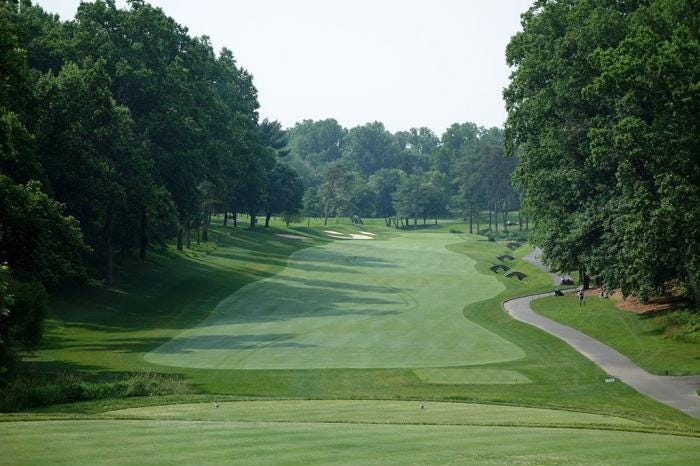 Managing the tee shot is tough; managing the approach is tougher. With water on the right and bunkers on the left, you take 4 here every day and do your best golfer sprint to the 12th tee. 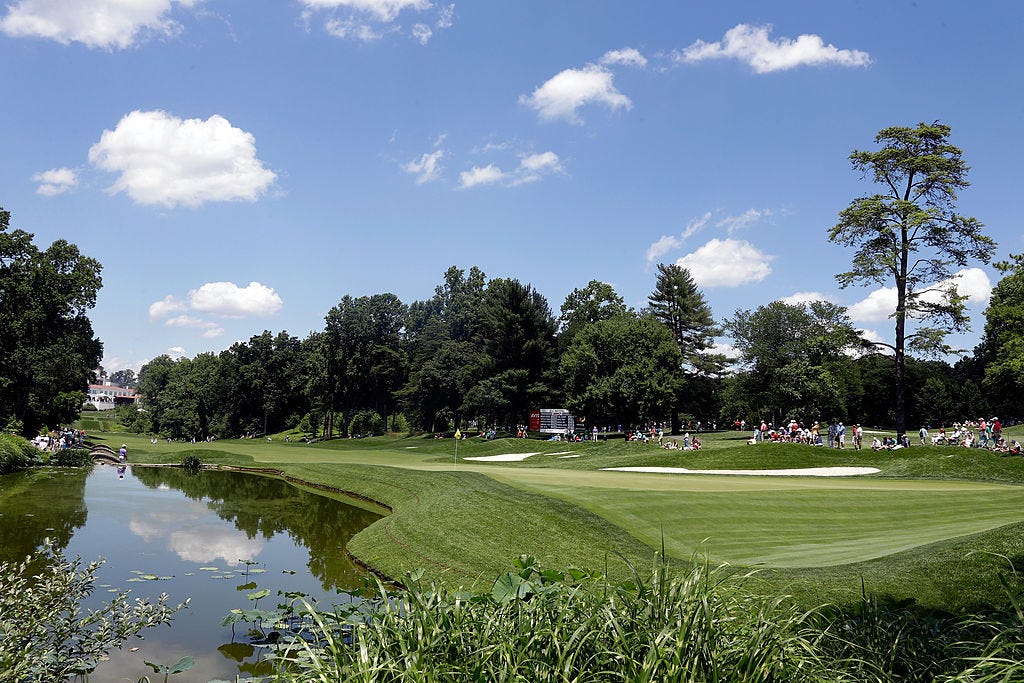 18 — The 18th is a 523-yard par FOUR. If the sheer distance doesn’t sound bad enough, take a look at this view from the fairway: 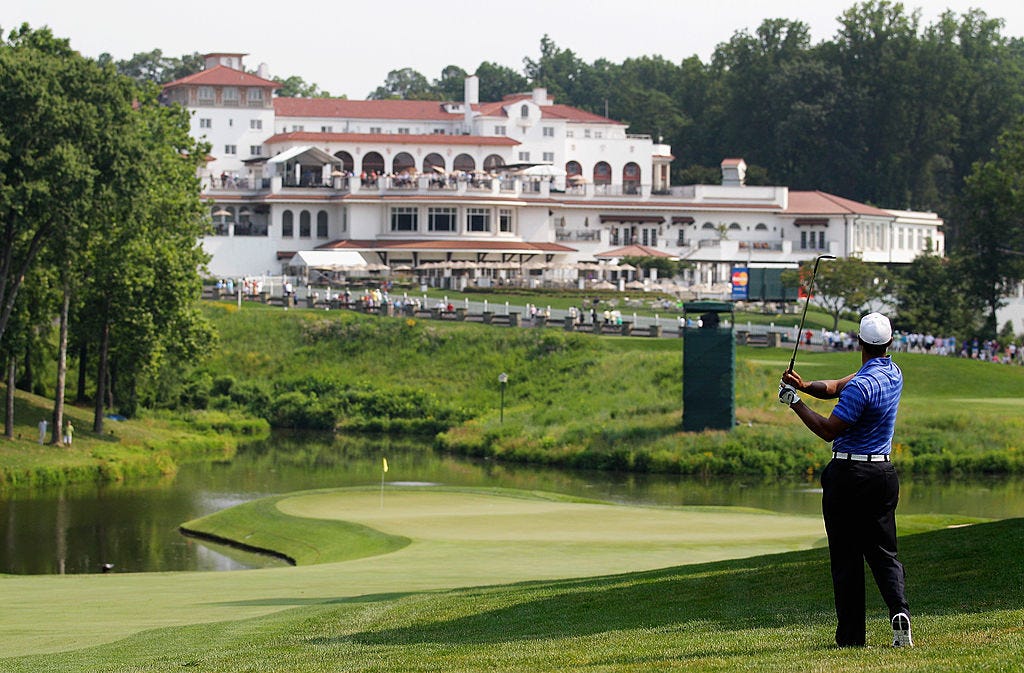 And this view of the hole’s skinny, peninsula green: 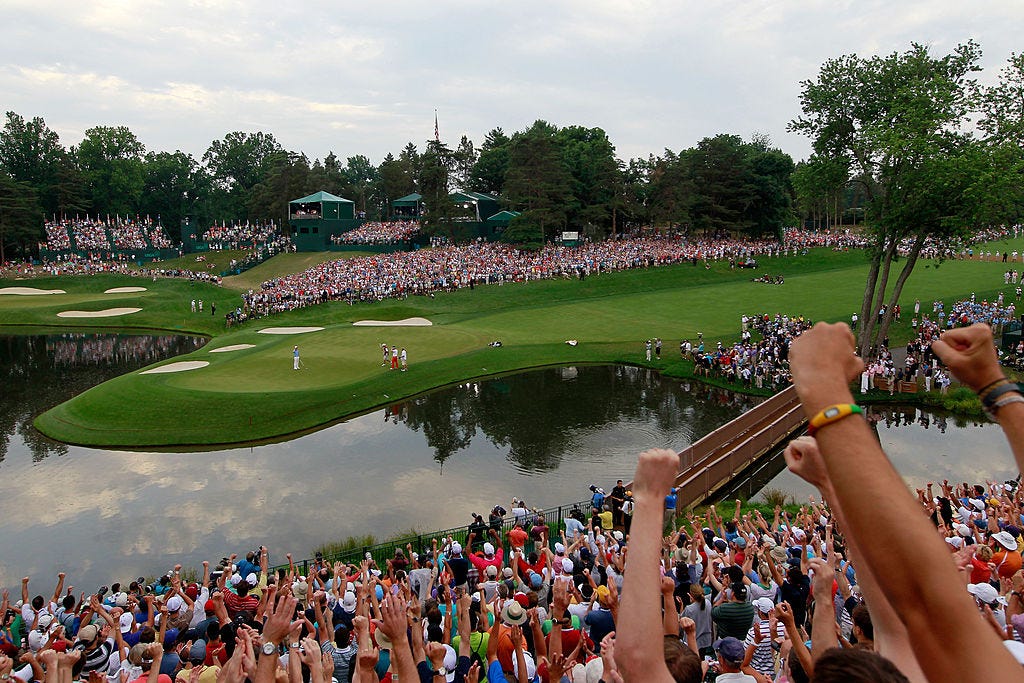 It’s a beast and provides one of the best settings for closing out a tournament in all of championship golf, especially if things are tight. 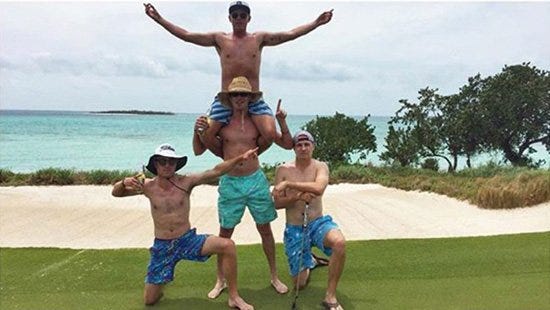 The spring break boys are back! Fowler, Justin Thomas and Smylie Kaufman go off at 1:12 PM on Thursday (Spieth not in the field). As you can imagine, the dorky golf writers are all like “OMG IT’S SB2K16 BACK TOGETHER OMG OMG” and if we’re being totally honest I too am that way. Love these guys and am insanely jealous of everything they do.

This year’s Cue-El field is probably more about who’s not in it than who is. With the Olympics cramping the schedule, this weekend became significantly less appealing. In just an 8 week span, the boys have the US Open, Firestone, the British Open, the PGA Championship, and the Olympics. At some point you gotta take a week off; that point for many is this week.

No Spieth. No Rory. No Day. No Phil. No DJ. Add the fact that Eldrick’s still injured and yeah, it’s no wonder the Tour tried to drum up some excitement by throwing SB2K16 back together.

You could argue I was a little off last week. I predicted a +3 winning score, and Jordan Spieth to post it. Instead, DJ won it at 4-under and Spieth finished +9.

Whatever. Let’s do this.

(-11) — Yes, the course is one of the longest on Tour and the rough is thick. But firmness is what tickles my fancy. Like last week, tourney officials will deal with some problematic weather on Thursday, but then things look clear going forward. The rain will soften things up and, with minimal wind expected, the winner will come in at double-digits under par. 11-under wins, book it.

Marc Leishman — I wanted to go with the Tour’s dad, Jimmy Furyk, but he just doesn’t hit the ball far enough. Leishman has 3 straight top-20s and had a strong T18 showing at Oakmont. Couple that with a top-10 the last time we were here in 2014 and yeah, he’s obviously grabbing the hardware on Sunday. 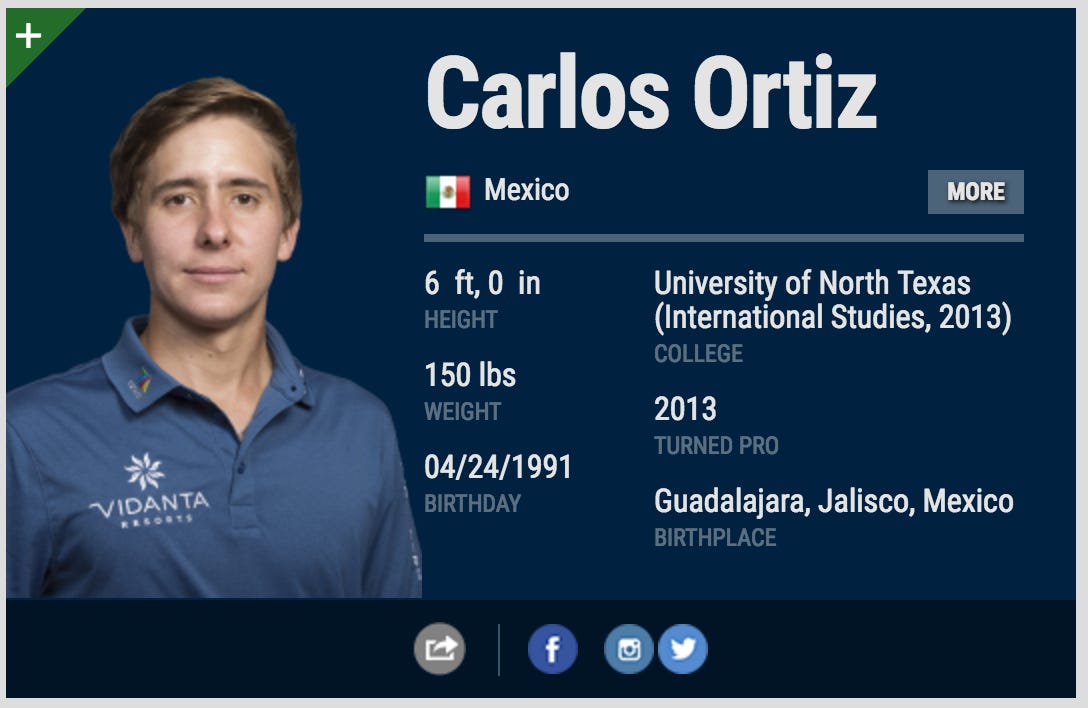 Carlos Ortiz of Mexico — This is tough on these filler weeks. Literally 2/3 of the 120-man field stinks. They’re nobodies. So I just narrow it down to the non-Americans, do a little research, and select one for dead fucking last. This week we have Carlos, this 10-year-old Mexican, who’s had just a SHOCKING string of showings this year.

Rory became the biggest name to renege on the Olympics yesterday. My quick input is this: Yeah, you couldn’t pay me to go walk around outside sweating in Brazil for a week. No fucking chance. Might as well just have the Zika injected with your next flu shot.

Yep, Arnie’s hitting balls again! Just when you think the King’s down for the count, he comes out swinging. After being unfit to hit his ceremonial tee shot at Augusta this year, it’s good to hear Arnie’s back.

Tiger Woods says he’s hitting the ball farther, but is still uncertain when he will return to competition. https://t.co/mqFHYJloht

I watched Tiger’s presser yesterday. It was meh. He gave his typical wishy-washy answers about the “process” and somehow tried to convince us he’s now hitting the ball farther. I can’t tell if he’s trolling us or if his mind is starting to follow the trend his body’s been setting.

Here is the full statement from the USGA on the DJ situation … pic.twitter.com/I4a1HpajX2

The USGA did a couple days worth of damage control following the whole Dustin Johnson debacle from Sunday. You don’t have to read that whole statement. This gist is this: they know they fucked up, they wish it had been handled differently, but they’re going to do literally nothing to change it or attempt to come down to the earth that the rest of us are living on here in the year two thousand sixteen.

NBC and Golf Channel will provide nearly 50 hours of British Open coverage next month. As the Masters has taught even the most fringe golf fans, golf provides the worst television coverage of any sport on the planet. Hopefully, this is a step away from that title and towards where other sports reside — actually showing their game’s best players, you know, when they’re fucking playing.

It’s the Quicken Loans National. What do you want me to say? If you’re a big golf fan, you’ll watch and appreciate the course. If you’re not, maybe you’ll get your rocks off by tuning in Sunday for Tiger super awkwardly joining the broadcast. If you think his dad jokes are bad in pressers, wait ’til you see him on live coverage.