I’d say this is slightly shocking seeing as how, in my head, Jimmy Vesey was already 1000% on the Boston Bruins the moment he said no to the Predators. I mean, we signed Matt Grzelcyk. They’re childhood friends and I was told that’s all a team had to do in order to guarantee the acquisition of a top-6 forward? Apparently not. Apparently the front office sometimes has to do some front office-ing and no one told the Bruins about that part.

Of course, this was still just his rights traded and Vesey is not a Sabre at the moment, they have until August 15th to sign him. But something tells me that playing with Jack Eichel, another local boy, in a hockey town is going to be a tough one to say no to. It’s just a gut feeling, but I think when you get the chance to grow with one of the game’s young stars you jump at it.

The whole thing sucks, but I’m willing to step up and take my fair share of the responsibility. The Grit Tour went to Buffalo, Cleveland, and Pittsburgh and nothing but good things have happened to them since. Stanley Cups, NBA championships, and young stars all flocking to the grit belt. Of course, I’m only willing to accept a small sliver of blame. The bulk of this wouldn’t have been possible if it weren’t for the Bruins front office’s deadline deals hoping to save a dead in the water team and the loss of draft picks that came with it. A third rounder as a piece for Liles or a third rounder for the rights to Jimmy Vesey? Better yet, a third rounder for Zac Rinaldo or a third rounder for the rights to Jmmy Vesey? Granted, when those moves were made no one knew Vesey would ever become available, but they’re a nice glimpse at the value the Bruins FO gets for a move versus what other teams do. Not a pretty glimpse, but a nice and clear one.

But this is where we’re at now. I guess it’s time to call Loui and actually make a deal? Not sure the FO even has a choice at this point because they’re going to look HORRIBLE if they fucked up on this and kept Loui for absolutely nothing.

Oh, we also need defensemen too. But get your naps in, Sweeney and Cam. Not much going on in the NHL today anyway.

UPDATE: Perhaps my gut was wrong about Vesey signing in Buffalo? According to his agent’s statement, they don’t appear to be chomping at the bit to sign there. Still in the game, boys. We’re still in the game. 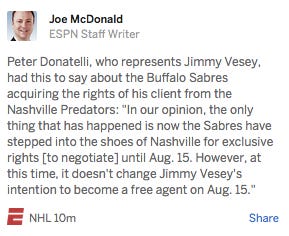