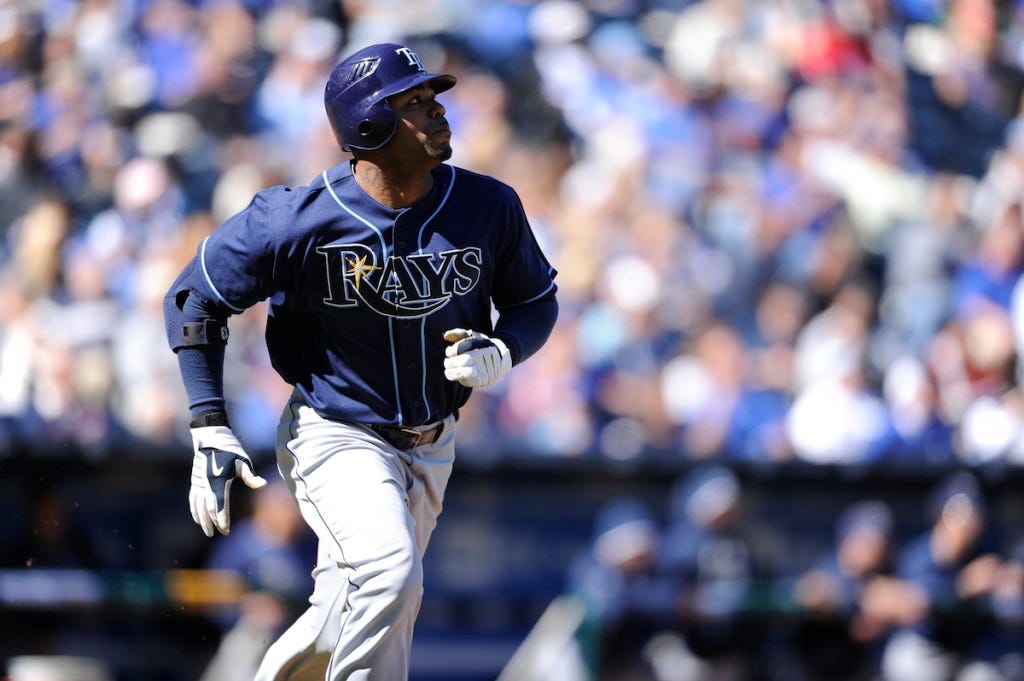 Honestly, fuck Carl Crawford. I wish I could end this blog right there, but I won’t. Allow me to elaborate.

I’m a Red Sox fan. I think we’ve established this by now. Crawford was a pain in my balls for years when he was in Tampa, swiping a thousand bags per series any time the Rays played the Red Sox. I respected his game for many years, but where he lost my respect was during the Coco Crisp/James Shields brawl when Coco charged the mound. When Crisp ended up pinned on the ground, Crawford was throwing jabs at a defenseless Coco. He never really recovered from there in my eyes. He only made it much, much worse.

Three years later, he signs in Boston for $142 million over seven years, which I still maintain is the worst contract in Red Sox history — worse than Pablo Sandoval (for now) and worse than Rusney Castillo, who just recently entered the conversation after clearing waivers today, and was taken off the 40-man roster. The reason why I think that Crawford is the worst contract in Red Sox history, even though Boston got out from under it after a season and a half, is because, yes, while you didn’t have to pay him a dime after a year and a half into the deal, you did have to give up Adrian Gonzalez just to get rid of Crawford. Whether or not Gonzalez would’ve made it in Boston is a completely separate argument. But you gave up Anthony Rizzo to get Gonzalez. If Gonzalez wasn’t going to work out in Boston (which he did from a baseball standpoint; he was just a whiny bitch), then you could’ve dealt him for something of great value to the Red Sox, not in a blockbuster trade just to get rid of shitbag Crawford.

So, Crawford goes to Los Angeles in the package deal with Gonzalez and shitbag Josh Beckett (and Nick Punto), and he has not shut up about his experience in Boston since. He’ll get asked about his time in Boston, and he’ll talk about it like it was the worst thing that a human being could’ve possibly endured. But he goes out of his way to bitch about it, too. You ask him about the weather, he blames it on Boston. You ask him about politics, he complains about Boston. You ask him for directions, he cries about Boston. It’s wild, wild shit, considering Boston was the only team that was dumb enough to give an average annual value north of $20 million to a player who had averaged 12 home runs and 66 RBI per season throughout his career prior to the deal.

Crawford started the 2016 season as a fourth outfielder, and was designated for assignment earlier this month, before being released by the Dodgers. He was so bad that the Dodgers were like, it benefits our organization more to pay you $35 million to play against us than for us. That’s when you know.

Stating the obvious, Crawford’s best seasons were in Tampa, where he was a four-time All Star, and built up enough of a resume to trick two teams into paying him a shitload of money that he didn’t actually deserve. To nobody’s surprise, the Rays might actually be interested in bringing him back for the league minimum. See, Tampa makes perfect sense for Crawford, because nobody gives a fuck about the Rays, which means that nobody goes to the games (29th out of 30 teams in attendance), and they’re in last place, so he can just flop around in the outfield, go 0-for-5 with 4 strikeouts, and nobody will even notice. And then he can collect his checks from the Dodgers, while playing out the rest of his career as far away from baseball’s brightest lights as physically possible, which is exactly what he wants. It’s a match made in shitty baseball heaven.