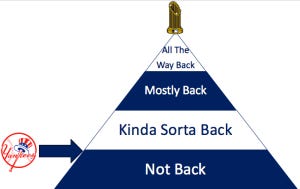 MINNEAPOLIS, Minn. — The Minnesota Twins giveth, and the Minnesota Twins taketh away. A four-game series against the worst team in the league gave the New York Yankees a sense of swagger through three games. But the final game of the series exposed the mediocrity of this bunch. Some of the inconsistencies that have plagued the Yankees throughout the season — pedestrian pitching and bewildered bats — showed up again Sunday afternoon at Target Field in the 7-4 loss to the Twins.

“It’s very disappointing,” said Alex Rodriguez, who went 1-for-4 with an RBI. “We felt like we had a shot to get a win today, and we let it get away.”

“You get greedy when we win the first three in a four-game series,” manager Joe Girardi said.

New York wasn’t necessarily being greedy — more like realistic, thinking it should sweep the Twins. Nonetheless, the loss Sunday meant the Yankees finished the “cupcake” road trip of series against the Colorado Rockies and Twins with a 3-3 record.

Going 3-3 against these teams may be more frustrating than is we went 1-5. At least if we bombed the entire trip, the season would essentially be over and we would know which direction the trade deadline was going to go. Instead we are still in it just enough that a 5 game win streak wouldn’t be a total shock and we would be right back in this thing. Hell even going 4-1 over these first 2 series would put us 2 games over .500. Instead, a week has come off the calendar and we sit in the same spot, 1 game under .500.

Since sweeping The Yankees, Colorado has lost 3 in a row to the Marlins and finishes up a 4 game series tonight. The hope is that with both teams having at least an opposite weekend, The Yankees can get even by taking a pair against the visiting Rockies. Colorado bats 56 points lower on the road so the hope is that being away from the friendly confines of Coors Field, we wont see some of the sloppy high scoring baseball from last week. If we can get some momentum going into the weekend, rolling over the Twins as we always do wont be that hard and we could see ourselves right back in this playoff hunt in time for Texas to come to town.

Brian McCann Showed Signs Of Life: After an 11 for 81 slump that saw McCann go hitless in his last 15 at-bats, Brian went deep twice yesterday. Although he has been banged up a bit this year McCann has avoided major injuries so there is no clear explanation for the slump so it’s tough to say yesterday ended it. With Romine playing well and Gary Sanchez waiting in the wings, McCann will have to figure this slump out quickly or he will become another bad contract on this roster that is blocking the future. I think McCann can do that and be the leader this team needs, but one game isn’t enough to say its happening yet.

Teixeira Is Almost Ready To Return To NY: Tex is going to play games Tues-Thurs in Scranton, with the idea being that he could return to the lineup this Saturday in The Bronx. Tex is still a Gold Glove player in the field but with his .180 average and 12 RBIs in the 48 games he’s played, I don’t have high hopes that a cartilage tear is going to help things. Provided that Tex can make it through this rehab assignment healthy I think he is a platoon player at best, at first base. With A-Rod blocking the path at DH, Tex won’t be able to get many starts there that wouldn’t be more valuable to the team in Beltran’s hands. As much as I’m sure Tex thinks he can help this team, this year, he’s really playing for a contract next season and The Yankees can’t sacrifice either this year or the future because of that.