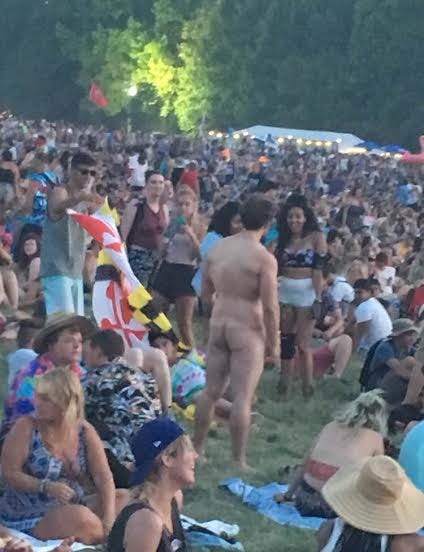 I can’t think of a worse possible way to spend 4 days than standing in a crowd of 80,000 strangers who haven’t showered in nearly 100 hours just to listen to music that you could very easily listen to on the radio. You are living, eating, sleeping, breathing in filth for 4 straight days. It’s like spending a long weekend in the state of Arkansas. And if you’re from around the area, chances are you know of at least someone who willingly signed up for that. But if you didn’t think those 200-second long snapchats of Mumford & Sons were disturbing enough, here’s one man who was literally the cock of the walk this past week at the Woodlands of Dover.

You can blme it on the drugs, you can blame it on the alcohol, but the fact that nobody even bat an eye at this dude hanging dong in everybody’s face just goes to show you what type of wasteland of humanity we’re dealing with at Firefly. But this all brings up a pretty good point about being a white male afflicted with having below-average genitalia. It’s something that we take for granted nearly every day of our lives, but this is a move that only we can get away with. This is just some harmless white boy with a micro-penis and a heavy supply of George W. Bush. Everybody can just laugh it off and look the other way. If this was some dude with a monster hang down? Well that would cause some serious concern. Hell, it might even land said dick a nice little sexual misconduct arrest. So what did we learn here today? Well we learned that the Firefly Music Festival is fucking gross, and we learned that white guys with small dicks have a Get Out Of Jail Free card anytime they want to get naked in public.

To answer the original question, however, no. I do not believe that walking around Dick Out For The Boys at the Firefly Music Festival got this dude laid. But it should have.