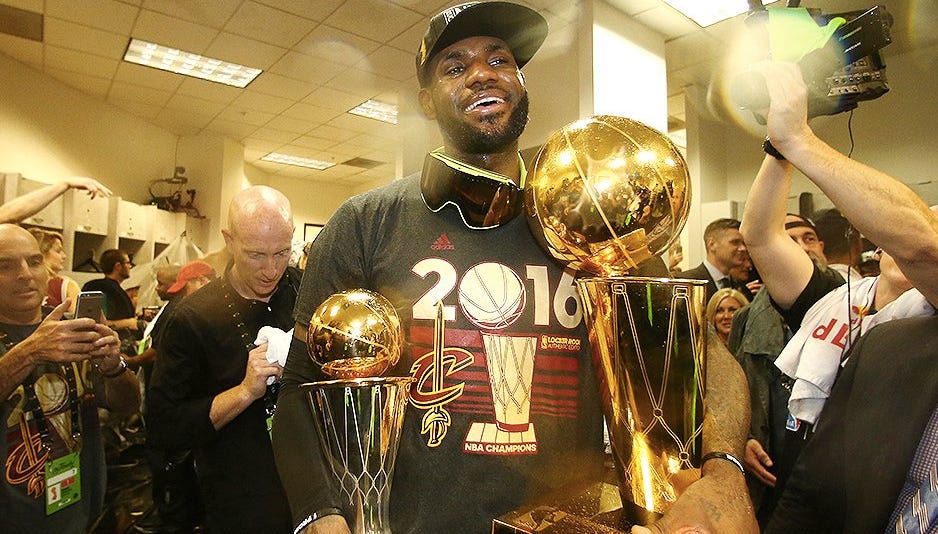 As a fan, when you think of a Game 7, you want something epic. A performance that lives up to the hype if you will. With each game of this 2016 Finals being pretty much a blowout, there was no guarantee an epic performance is what we would get. With so much on the line for both sides, this was already one of the biggest games in NBA history, and it lived up to that billing in almost every way. As a Celtics fan, I’ve been on both ends of spectrum when it comes to Game 7s. I know what a cruel bitch she can be, but I also know how exhilarating it is when your team pulls it out. What we saw last night was a man who not only willed his team back into the series, but when the moment came to put his foot down and come through for his team and his city, that’s what he did. I think Mark Cuban said it best

There isn’t a to to say that you probably haven’t heard, but let’s put this all in perspective for a second. Lebron now joins Jordan as the only players with 3 Finals MVPs and 4 regular season MVPs. He now joins Kareem as the only players to win a Finals MVP with two different teams. For the Finals he averaged 29/11/9/2/2 and once he was called a bitch and have to play three elimination games he bumped it up to 36/11/9. Everything we love to dog him on, especially his inability to come up in huge spots, is now mute. What stood out to me about Lebron’s performance was that it wasn’t complete domination from the opening tip. In fact, he sort of struggled to start this game, was very passive, and couldn’t stop turning the ball over. On the flip side, the Warriors didn’t come out and set the world on fire either. That’s what made this game so interesting to start, it consisted of typical Warriors math. Sure they weren’t playing particularly well, but when you’re trading threes for twos, you stay in the game. After the first quarter where the Warriors made 5 threes, I think we all had that “uh oh” feeling. If CLE wasn’t going to be able to guard the Warriors from behind the arc, and they are going to me making them like they did early, you can’t beat them. When GS makes threes and doesn’t turn it over, they are unbeatable, we saw that all year. The problem was, they stopped going in.

Before we get to GS, let’s look a little deeper on how the Cavs pulled this one out. Over the course of this series, there have been a few constants. The team that is more physical and wins the battle on the glass had won games 2,3,4 and 6. Well, CLE owned this category 48-39. Where I think not having Bogut hurt GS isn’t at the end of the game (he doesn’t play 4th quarters), but early. Lebron had 5 rebounds in about six minutes to start this game, and shit even Kevin Love had 7 quick boards, which hadn’t happened all series. Once the Cavs figured out how to own GS on the glass, this entire Finals had a cosmic shift. With that, the team that won the second chance points battle won games 1,3,6. CLE won this last night 17-6. Throw in the fact that the team which won the fastbreak points battle won games 2,3,4,5,6, and CLE won this 18-7, you see a trend. The Cavs did all the things in this Game 7 that you needed to do to win a game in this Finals. The other key to pulling this off, is how they used Lebron on the offensive end. I’ve seen with my own eyes many times that when Lebron is in a big elimination game, you know you’re in trouble if you don’t make him shoot jumpers. Well, let’s take a look at where Lebron took his shots last night 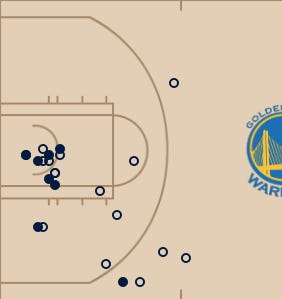 he LIVED in the paint. You simply can’t let someone of his talent, on this big of stage, get to the rim that frequently. CLE offense didn’t really change throughout this Finals, it continued to mostly be P&Rs and iso drives, but you know the saying, if it ain’t broke don’t fix it. CLE did a great job in getting Lebron favorable matchups, and you live with the result.

A lot of talk throughout Lebron’s career consists of the help he’s had around him. I think you could argue that Kyrie Irving will go down as his second most talented sidekick. No, Kyrie should NOT have gotten the MVP of the Finals, but they don’t win it without his performance either. Early in the series he roasted Curry, so GS countered by showing Klay at times. Didn’t matter. On the biggest shot of the season, who did he go at? Steph Curry. The Cavs did a great job in finding wherever Curry was, and attacking him. They couldn’t do that last year with guys like Delly, so I don’t think anyone expected Curry to have such problems on the defensive end, but they were glaring. You could count a handful of times he decided to not even attempt to play defense, early in Game 7 after missing a three he jogged back, kinda weird showing defensively if you ask me.

To put it simply, the Cavs played harder once their backs were against the wall. Tied at 89, this was never more apparent than when Lebron saved CLE season.

That’s a play from a guy who refuses to lose. How he even got to that ball makes zero sense, let alone saving possession. You make a play like that, you deserve to win. Period.

Now, the flip side. Some might not want to call blowing a 3-1 lead, losing 4 out of 5 and 2 of those at home a choke. That CLE has great players too. I’m not so quick to agree. GS went the last 5 minutes of this game without scoring. They are a 73 win team who some say are the greatest to ever play. You need to win this series, let alone Game 7 at home. They tried to call Lebron out, and instead were the ones that got punked. Steph Curry and Klay Thompson shot 12-36. The Warriors shot 28% in the fourth quarter, going 1-10 from three. That’s choking I’m sorry. If the story was flipped, and Lebron had that sort of performance, EVERYONE on the planet says he choked. The Warriors are no different.

But it wasn’t just the players. Steve Kerr choked this game away too. At no point in this series has Festus Ezeli and Harrison Barnes given you anything. Yet Kerr decides to ride with Ezeli who commits a horrendous foul on a Lebron three, continued to get eaten alive in P&R, and did nothing really but hurt you. He also gave Harrison Barnes 29 minutes. Now I think there was some confusion when I said he was going to be a max player. Not that he DESERVES it, but that there is a GM out there who is going to take the risk, especially with the cap going up to 94M, but he continued his horrific play. He instead decided to only play Barbosa four minutes. I also didn’t really love his end of game play out of bounds on the Warriors last possession. Shoulda used one of Brad Stevens plays tbh.

Not to add salt to the wound, but when your best player at a key moment in the game is getting shut down by KEVIN LOVE on the perimeter, you probably aren’t going to win

When it was all said and done, we as fans got exactly what we craved. A close, intense game 7 with incredible plays from both sides, and a close finish. History was made, this time for Cleveland, and legacies were written.

Now where do we go from here. Well, it wouldn’t shock me if Love is still shopped this summer, and if you’re GS, how is Durant not your #1 target. Their owner left the building promising he was going to be aggressive, and since they are gladly going to let Barnes walk, the Warriors will have money to spend.

So join me in saying goodnight to the 2016 NBA season, and let’s shift our focus to the part of the year that really matters. Draft on Thursday, free agency in a few weeks, things are about to get really, really interesting.