NHLPA – “I feel the passion inside and the fire in my eyes. I want to face new challenges and I want the chance to play in the best league.” A renewed love for the game and a desire to compete against the top players in the world has veteran goaltender Ilya Bryzgalov pumped at the prospect of returning to the NHL stage…

…Bryzgalov and his agent, Ritch Winter, hope NHL teams see the same in him.

“Having worked with (Hall of Fame netminder) Dominik Hasek on his return after a year off and knowing the training Ilya has in place for the summer, there is no doubt in my mind he will perform at the level he did leading the Wild to the playoffs two years ago,” says Winter. “With Ilya prepared to play for a modest salary and take most of his compensation in bonuses, this will be a unique opportunity for a team looking for an experienced goaltender to challenge for a starting job.”

Brilliant move by Bryzgalov’s agent to make sure he got that “Ilya prepared to play for a modest salary” quote in there. Because if there’s one thing that Bryz will always be remembered for, besides his thoughts on the universe, it will be that 9-year, $51 million contract the Flyers offered to him just a week shy of 5 years ago. 9-years, $51 million on June 23, 2011. On June 25, 2013 the Flyers used their compliance buyout and ended the Bryzgalov Era in Philadelphia 7 years early. The man is still getting paid $1.6 million per year through 2027. So yeah, obviously no team in the NHL is going to be that eager to pull the trigger on offering him a contract. But if you’re a team looking to grab a backup on the cheap this summer and throw a one-year contract his way, well then why not at least see what Bryz has to offer?

The world is a better place when Ilya Bryzgalov is in it. If you’re a Flyers fan living in the area, then you’ve probably seen him out a few times at games with his son. And every time you see Bryz at the Wells Fargo Center, you think to yourself that this fucking idiot should be dressed and on the ice right now. Was he the greatest goalie ever? No. Not even close. He had a few good seasons in Phoenix and even had some moments his first season in Philly but that was about it. That being said, the Flyers definitely dicked him over by giving him that contract in the first place. They put him in a horrible situation. Ilya Bryzgalov was not a goaltender who deserved that kind of money. They set him up for failure. They set him up for failure with the contract, they set him up for failure by bringing him into one of the hardest cities for a goalie to work in, and they set him up for failure by distracting him with all the cameras when HBO came to town. Ilya Bryzgalov can’t play in a hockey-crazed city. He just doesn’t have the personality to handle that kind of pressure. He’s too… well he’s too out there I guess. 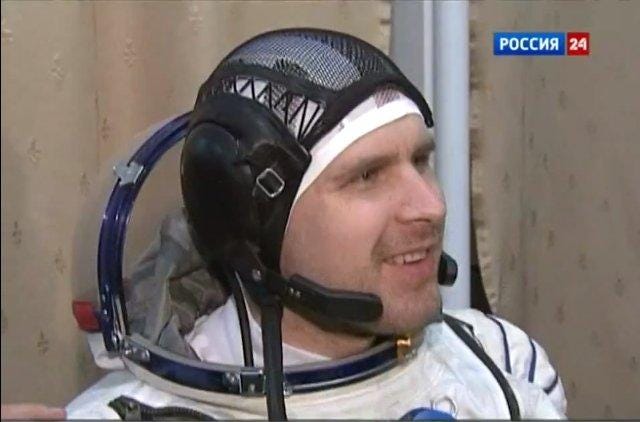 But think about Bryz making his way back to the Coyotes? It would be the perfect scenario. Throw him back in the desert where nobody gives a fuck about the NHL. Sign him to a two-year deal but only after talking to the Las Vegas owners first. Basically you get Bryzgalov for the first year with an agreement in place that Vegas will take Bryzgalov in the Expansion Draft next summer instead of any of the young talent Arizona has developing down there. Because nobody, and I mean NOBODY, belongs on that Vegas team more than Ilya Bryzgalov. It’s not like anybody living in Vegas will actually care about the team so there’s no pressure from the fans. It’s not like a new team is supposed to win the Stanley Cup right away so there’s no pressure from the team. And then after every home game, he can perform some stand up comedy at any of the casinos. And by stand up comedy, I mean just throwing a mic in his face and just letting him ramble for an hour. If they can make a movie out of the John Scott story, just imagine what they’ll do with the Bryz Comeback.

Now before we end here, let me just take a little bit of the credit for inspiring Bryz to make this comeback. Quick timeline of events here; this was Wednesday while Expansion Drafting The Best Possible Team For Las Vegas.

Then Thursday comes around and here we are… 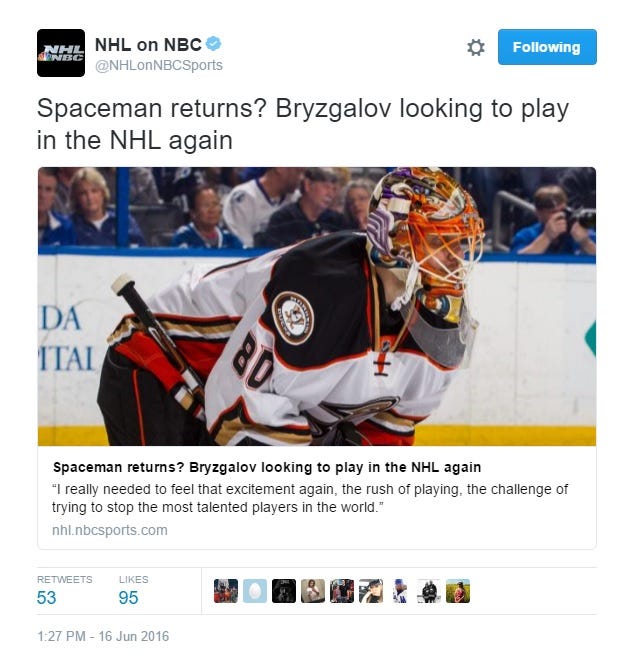 And like I said, there has never been a comeback story that I’ve rooted for harder than I’ll be rooting for Bryz here. And you should too.