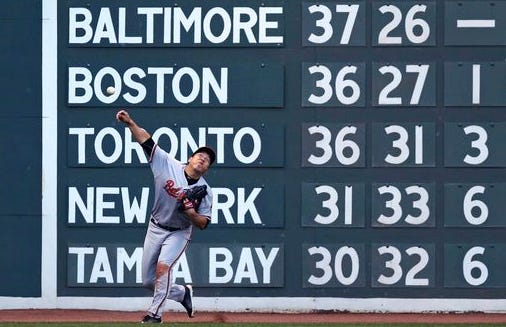 Will the Orioles ever lose another series to Boston? I joked around and called it Camden North on Wednesday, and Boston fans got pissed, but for the last few years, the Orioles just don’t seem to lose much in Boston. Since the beginning of 2012, the O’s are 27-17 in Fenway, home away from home, as they took another series last night.

Tyler Wilson sealed the win with the best start of his career. Wilson threw 8 shutout innings and limited this offense to 3 hits. He had been struggling in his previous starts, but righted the ship at the perfect time. After giving up 5 runs, 5 runs, 3 runs, 3 runs, and 5 runs in his last 5 starts, Wilson needed this kind of outing to get his confidence back. The Sox only threatened once in this game, and Wilson was able to get out of it and let the Orioles offense go to work. Adam Jones hit another home run over the Monster, his 8th round tripper of the month after a terribly slow start.

Baltimore could barely hit David Price in Game 1, but when they did, the ball left the park. Game 2 they couldn’t sniff Steven Wright’s knuckleball. But Game 3 they were all over former Oriole farmhand, Eduardo Rodriguez. I’m not sure why Boston thinks they have this division, the O’s clearly aren’t scared of Price and have proven they can beat Boston at home and in Fenway. This should be a fun division race the rest of the way. 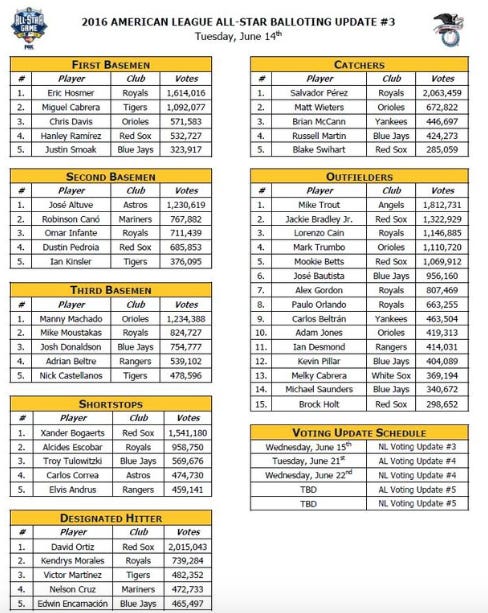 I hate All Star voting as much as the next guy, but there is a good chance the O’s are going to be well represented in San Diego. I know this is a popularity contest, and the Royals fans are stuffing the ballets again, but it is nice to see some of the O’s getting their proper recognition.

I can live with this. Davis is third behind Eric Hosmer and Miguel Cabrera, two guys you would expect to be at the top of the list. Davis has had his struggles this season, but is making a push for an All Star spot after his A.L. Player of the Week award last week when he homered in 5 straight games. .226/16 Hr/40 RBI aren’t numbers that are blowing anyone away, but they are sort of where you would expect him to be, Hosmer and Miggy are having slightly better years at the plate, but Davis is making a case with his glove too.

Duh…. Manny could and should be starting at third or short this season, he’s THAT good. He also has a 400,000 vote lead over a guy who hasn’t played in 3 weeks because of a torn ACL, but good job Royals fans. 44 games at shortstop this season, and 23 at third, doesn’t matter where he is playing, Manny is putting up MVP type numbers with his .308/17/41 and insane defense. Manny will be your starter in San Diego.

Wieters has been very good for the O’s this season, at the plate (.256/6/28), with his clutch hitting in the late innings, and behind the plate. Wieters and Sal Perez are really the only two guys in question for the All Star team, so these are the guys you’ll see representing the All Star game.

This is laughable, all he’s done is lead the league in homers (20), 4th in RBI, and posted a .283 average. Best offseason pickup out of any team in the league, and a reminder, they got him for a third string catcher. It wouldn’t surprise me to see Trumbo in the Derby as well. And let’s just focus on the fact that JACKIE BRADLEY JR is ahead of Trumbo, guy had a good 3 weeks, but yeah, let him start the All Star game. I can deal with Trout and Cain being ahead of him, those guys are legit, but Bradley is a joke.

Jones is probably the third best centerfielder in the league, but due to a terribly slow start and some injuries, he finds himself with a steep hill to climb if he wants to reach his sixth All Star game this season. Jones has rebounded nicely in June with a .272 average, MLB leading 8 home runs, and 17 RBIs. No way Jones beats out everyone ahead of him, but he should at least be ahead of Beltran, PAULO ORLANDO, and Alex Gordon. Maybe this is a good year for Adam to miss the ASG, he has been beat up this year, I’m sure he would enjoy some extra rest.

I thought Jonathan Schoop would be in the top 5 for second baseman, but on second look, the AL second baseman are really fucking good. well, except the guy the Royals fans voted for. Altuve, Cano, Pedroia, Kinsler? That is a damn good group.

As for pitchers that should make the team, I expect Chris Tillman, Brad Brach, and Zach Britton to represent the Birds in San Diego.

Some big games coming up here, taking the Toronto series would be great, giving them some cushion as Boston heads out to Seattle. A one game makeup trip to Texas, and then San Diego comes to town for 2. Let’s string together some wins here, eh?