For years, probably two, maybe even three years now I’ve been grasping at straws to defend Taylor. When she danced like a fool at award shows, I jumped in front of the hail of bullets. If she acted surprised when she won an award for the 10,000th time, I ran to the front lines. Every eye roll, cat Instagram, famous boyfriend, and shitty haircut had me donning my armor and trying my best to defend her.

But I am officially, unequivocally, erasing-my-#Swiftie-tattoo-ingly, 100% out.

There’s just no defense for this. I’m not exactly sure of the timeline, but I believe she broke up with Calvin Harris 15 minutes ago. It may have been longer, but it was definitely after my morning piss. Yet she’s already out there with Loki and sitting on rocks like they’re posing for shitty engagement photos?! Get… thefuck… OUT. Bouncing around like that is absolutely indefensible. Act like a real 23 year old, Taylor, and pretend to not even like the person you like for years on end. Never even admit you like a person, sleep with random folk, and drown your sorrows in liquor. That’s how adults do it.

I know I’ve spouted nonsense, nonsense that even I didn’t believe, about how it’s the media’s fault and paparazzi bullshit, or whatever, but I promise you’ll never hear from me again. I was trapped, like a boyfriend in a shitty relationship. I knew the signs, I knew my friends were telling me I was an idiot, I knew I was wrong… but goddamn the sex was great. While Taylor and I had never had sex, her bangers in my headphones served as our copulation. Looking back on it, they probably served to brainwash me.

However, I have finally broken free of my sex/Siren shackles. The spell has been broken and I see what a fucking idiot I’ve been. It’s over, Taylor, and I’m never coming back. Don’t get it twisted, however. I will still be listening to her music because that shit is still heat. Because her music is like an ex’s nudes, you can’t take those from me. They were a gift. I may never have to deal with your personality again, but I will forever enjoy the only part of the relationship I actually liked.

PS – If you think these are the words of a lover scorned, you’re partially correct. But at least I’m not as petty as Calvin Harris. He blocked her on Twitter and deleted all pics of them off his Instagram. Be more of a 16 year old girl, Calvin. Grow up and write a blog, like a man.

UPDATE: Kim Kardashian had a huge profile published in GQ (worth the click even if just for the nudes) where she says not only did Taylor absolutely know about the “I made that bitch faaaaaaamous” line, but even had her lawyers send a letter saying they better not do anything with the footage of her in the studio agreeing to it. Taylor Swift SUCKS. 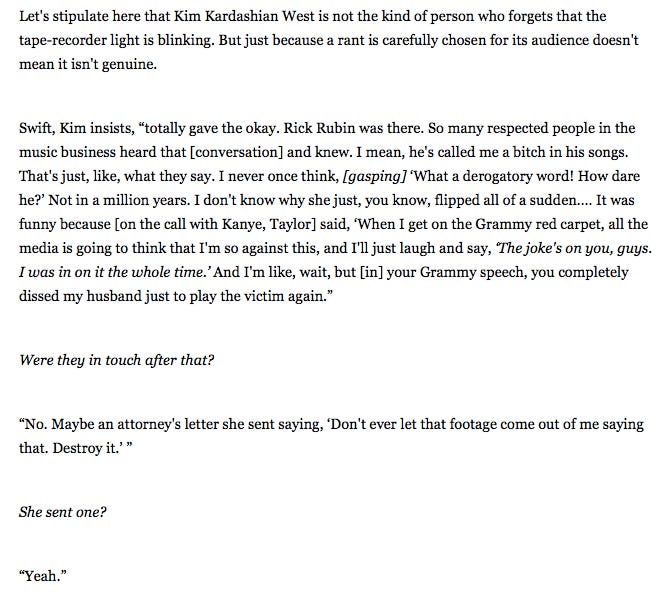